Does everyone’s Apple Music Browse screen look like mine?

I have tried for the past year and a half to reach out to Apple and Apple Music via Twitter with complaints about my suggestions. I have repeatedly selected “disliked” or “Suggest Less,” and it seems all that happens is Apple doubles down and suggests more. Here is a screenshot of what my Browse screen looks like. 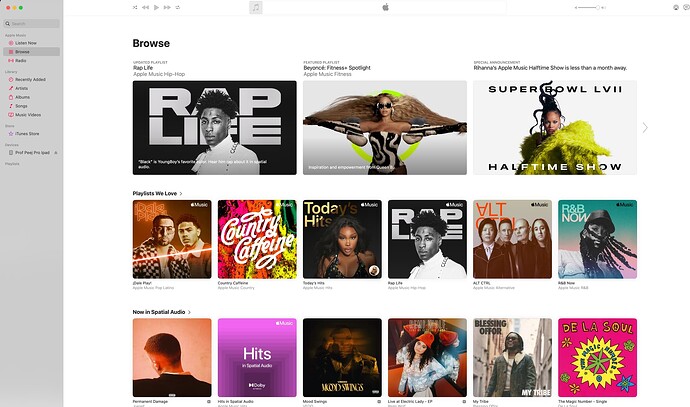 Yes. I rarely use Apple Music, though, so it has no idea what I listen to unless it’s spying on me when I fire up Roon or Qobuz.

Yep, same thing. Listen Now is the curated screen, Browse is the generic popular music one. It drives me nuts that Apple Music defaults to Browse, while I want to remove it.

Listen Now is generally pretty good for me. Sometimes they will put in a huge ad for something new that I might like, but usually it’s helpful and gets me listening to something different.

Listen Now is generally pretty good for me

I just clicked on “Listen Now” and it’s showing me a lot of Prince and Francis Poulenc. I guess today’s show is being brought to me by the letter “P.”

If you rarely use Apple Music, it probably won’t be very good for you. I have used it for years, so mine is pretty good. Other than that recently listened to music can rate a bit too high in its algorithm. Sometimes I will listen to something new, and next thing I know my Listen Now screen has a bunch of recommendations for it.

Prince and Poulenc are pretty much on the money.

I was rather surprised Apple Music did as well as it did considering I rarely use it.

It drives me nuts that Apple Music defaults to Browse, while I want to remove it.

Ugh. This is why I can’t bear to use Apple Books. Just show me my library—I don’t care what’s trending or what you think I want to read next.

It drives me nuts that Apple Music defaults to Browse

That’s Marketing 101. Keep your product in front of the customer.

I worked for a major grocery chain while in school. A quick stop to buy milk, bread, and eggs took you around the store passed the most profitable items. That’s why you end up buying more than you planned.

That’s horrible marketing though. It’s marketing products on Browse that I would never listen to. They could show me relative products (music) that I would actually listen to. I guess that with other demographics (the ones they care about) there is enough cross over that those people might be curious. It has the opposite affect on me though, it makes me dislike the product as a whole.

The state of the Apple Music Mac app makes me not want to use it. The only reason I am still there is that there isn’t anything better. It’s a race to the bottom, that Apple is barely winning.

I see what they are doing, didn’t say they were good at it.

The state of the Apple Music Mac app makes me not want to use it.

I’ve been a YouTube Premium (no advertisements) subscriber for a year or two and started using YouTube Music, which is included, around 6 months ago.

Google doesn’t sell music so the app launches with a page of rows like “Mixed for you”, Quick Picks, and From Your Library (songs I uploaded). The rows that follow have recommendations, playlists, videos, etc.

Nothing appears to be curated. It’s mainly genres and/or artists like those I have played and/or uploaded. That works well for me but may not be good for someone that likes to be introduced to new music. Without Siri it’s not as convenient to use as AM in the car, so I rely on playlists most of the time. When someone is with me they can tap Assistant.app and ask it to play a song.

I’ve yet to find a perfect music/movie streaming app. Most are desperate for subscribers and keep shoving content in our faces.

I don’t care what’s trending or what you think I want to read next.

It would be great from my side, if it would even work!
But all of those adds are completely worthless, no matter whether they came from Amazon, iBooks or what ever company else.
I just read a book, and instead of showing me a new book, based on the content of what I just read, I get the same books over and over again.
Also if I buy something with Amazon. Bought a new TV, so instead of showing some Set-Top-Boxes or BlueRay or Sofa or Pop-Corn-Maker next, I am bombed by hundreds of offers for new TV´s.
But as this happens to all companies I doing business with, this seems to be a overwhelming problem for them…

Thank you! I didn’t know that about the Browse screen. Listen Now is where I’ll start paying attention then. And I agree about the marketing, They know what I listen to so why not give me suggestions around those genres?