My iPhone, it’s an amazing device. I use it all the time. But honestly, specifically this morning, I’m missing my old iPod. 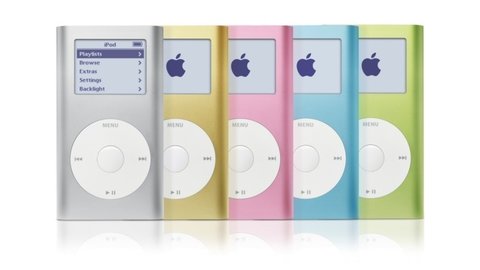 I think it was watching @Bmosbacker struggle through losing access to his notes that caused this morning’s reminiscing. Having to choose between web apps or iPhone apps to run on the Mac because the first-party app isn’t up to the task. I remember when Apple’s bundled apps set the bar for third-party apps to meet.

The era of the iPod was fantastic. Apple was on the upswing, every release of OS X introduced cool new features that actually made my Mac better. I loved curating my music collection, I loved being able to bring it with me. iTunes was great, “rip, mix, burn”. There was a thriving third-party ecosystem on the Mac developing software that not only looked great but worked great. We all expected less from our computers back then, and, at least I assume, we were mostly pleasantly surprised when they could do more.

It was exciting to watch Steve Jobs in a keynote… I was always waiting for ‘…one more thing…’. The keynotes weren’t nearly as slick and over-produced as they are now. It wasn’t the executives trying to be movie stars. It was just Steve walking out on stage to talk to the crowd. We all rooted for Apple to be the comeback kid, and, with the iPhone, they came back bigger than I think any of us expected. A lot bigger than I expected anyway.

When the iPhone, and later the iPad were released, many of my favorite apps were never able to make the jump. Once we had an iPhone that could run native apps, the next logical desire was to have everything on our Mac over on our iPhone too. The iPhone was such a success that they changed the design of the iPod to match the all-screen iPhone, which was a shame because I loved the click wheel iPod. With the iPhone came the App Store, and with the App Store came the start of many of Apple’s worst aspects. The economy of the App Store favors subscriptions, and the combination of business models favoring cross-platform applications and subscriptions led us to where we are now.

The Mac hardware today has never been better. The Mac software, on the other hand, leaves much to be desired. Do we want to pay an overpriced subscription for this bloated, non-native note taking application, or this other one that’s about the same thing? How much, monthly, is access to our passwords worth? And do we want to run that same app with the same feature set in Linux while we are at it? How about a core Mac application with an iPhone-level feature set and UI? How about we either make all the Mac apps ports of iPhone apps, or make them web apps and ship an entire copy of Chrome with each of them, and leave it running all the time?

I guess I’m feeling nostalgic for the way things used to be this morning. I miss Apple of the early to mid 2000’s, and I miss having application options that put Mac users front and center, instead of as an afterthought. I know that we’ve gained a lot over the past twenty years I’ve been using a Mac, but we’ve lost quite a bit too.

The iPod was the first Apple device I bought, it was built like a tank (unlike the several headphones that I got through during that time) and a constant companion during my daily commute. Back then, iTunes was a joy to use and not yet the bloated behemoth it turned into (and still is in the guise of the Music app.) I sold the iPod to be recycled many years ago, and recently looked into the options for getting a refurbished version with a larger battery and SSD, but the cost put me off somewhat — perhaps next year?

What I miss most from those times are the skeuomorphic designs and ‘lickable’ Aqua UI — applications and the operating system had personality to them. (I’ll include Windows 7 here, which I was using in the late 2000s and early 2010s prior to buying my first iMac — my favourite version of Windows by a wide margin.) Today’s flat, austere and often-inscrutable user interfaces feel like even more of a retrograde step when you consider the massive leap in hardware performance in that time. I really hope that the pendulum will swing back towards some sense of depth, or at least more accommodation for the user beyond resorting to Accessibility options.

I can understand the nostalgia, we always remember the good bits.

The first Apple Device I owned was an iPod Mini also, swiftly followed by a PowerBook, then an iPod Nano and a Mac Mini.

There were many good things, but there were also massive downsides. The phones and PDAs I was using at the time (remember WIndows Pocket 3.0) either didn’t support apps or the apps were very expensive and massively limited. For GPS you needed a dongle with a cable to connect to your phone and a subscription or massive one off cost to download the maps. Upgrade pricing was a thing though.

Subscriptions only came relatively recently when the lack of upgrade pricing was actively hurting Developers, customers, AND crucially the App Store.

Back then I couldn’t download podcasts to my iPod on the go, they’d download to my computer at home and I’d plug my iPod in every night to charge and to transfer any newly downloaded podcasts to the iPod.

Films largely came on DVD and music on CDs, there was no everything you could eat music or tv/film services unless you count Netflix (US) or Lovefilm (UK) where you would post DVDs back and forward. So if you bought 12 films a year it cost you about £180.

Downloading anything from the internet was very slow and often was poor quality to minimise the file size, Broadband became a thing (in the UK) in the early ish 2000s. So you would use Dial Up and pay per Minute Online. I remember my first 128kb bandwidth Cable Modem. It would only connect to one computer.

Phones had 2g data connections (not even 3G until about 2004/5) WiFi wasn’t widespread, you certainly didn’t get it in public spaces for free. You had to specify Wifi as an option on computers you bought.

Mac users were crying out for faster computers. Apple couldn’t get a G5 into a laptop so Pros were hurting for speed. Laptops were also nowhere near as fast as desktops. If you wanted power on the move, you either needed absolute top spec, or to move your desktop rig with you.

Hard Drives took time to spin up and you daren’t move your computer without shutting it down or waiting for the HDD to stop spinning in case you dinged it.

A guess a lot of this isn’t Apple specific, but it’s easy to think that everything was great. It’s not always true.

Apple has software challenges, but you show me an organisation that size which doesn’t have mountains to scale. Microsoft have scaled back some things to refocus on what’s important to them, Facebook can’t operate without violating privacy, and Amazon are scaling back on Alexa because it doesn’t make them any money. Oracle is being challenged by open source products

I think that the other side of the coin for me is that when Apple’s ecosystem works, it works. I’ve always loved feeling like I’m living in the future, and I think that’s why I stick with them. Being able to walk into my kitchen and speak into the air “Hey Siri, text Jacob good luck at your game tonight”, and have Siri do that for me is still kind of amazing to me.

Having all my health information on my wrist all the time, asking Siri to play literally any song I can think of, getting a workout on the rower in early in the morning with my AirPods hooked to my Apple TV so I don’t wake anyone… all these things make me feel like what I’m looking for is in reach. That minimalist, simplistic future where my technology actually enhances my life, instead of detracting from it.

I think maybe that’s where I’m at, here at the end of the year and after considering the why of this wave of nostalgia this morning. I don’t really want to go back in time, I remember how dreadfully slow those G4 machines were. What I want to do is adopt only the technology that enhances my life in meaningful ways.

What really helps me concentrate, what helps me move the needle forward at work? What helps me be present and mindful with my family during my off hours, and what helps me do the things I want to do and be there person I want to be? Maybe that’s why I keep coming back to this forum.

I wouldn’t cal this nostalgia but somehow this text message I received from a relative seemed relevant. A 15 year-old in a European country who does not know how to answer a landline phone. I’m sure there are 15 year-olds in the US who also don’t know.

We’re all at [ ] house and she got a call on the house phone/landline and [ ] asked [ ], the 15 year old from [country] , to answer the phone for her and she looked scared and said “I don’t know how to do that” and she lifted the receiver and goes “how does it work? Do I press a button to answer it?” Yall I can’t😂young kids nowadays don’t know how to answer a landline.

At a friend of mine’s daughter’s 8 grade graduation party, one of the graduate attendees tried to use a rotary phone. She was pushing in the finger holes and wondering why it wasn’t working. She was amazed when I showed her how it worked.

Can you imagine the reaction when confronted with a fax machine.

Fax machines are about to become even more obsolete as Analogue lines are phased out in the UK soon.