I am sure @RosemaryOrchard is very happy at this news! 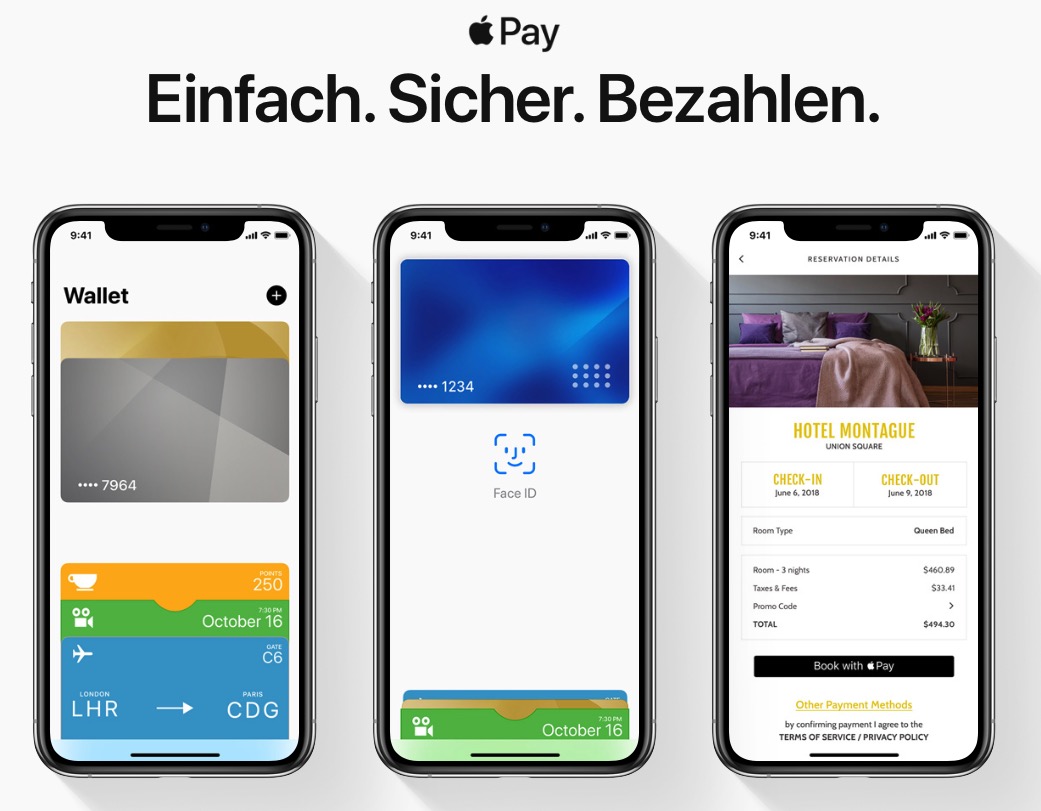 I am! I already have one card working and emailed my credit card provider to ask them when it’s going to be available. I just hope the response isn’t “What’s Apple Pay?”

(Their app hasn’t been updated for screen sizes post iPhone 5S I think, no Face or Touch ID support - not even a pin, and the website is… interesting!)

I opened a new bank account and essentially changed banks because of the awful apps and lack of Apple Pay for years. (My other bank also has nearly zero branches left either, so that was a large contribution). Old bank still has better international / EU card charges, so left the accounts open as a travel account.

Financial institutions are the worst at doing technology!

Honestly, I don’t even care. NFC cards work for ages. What’s the benefit of Apple Pay?

Right now, the vPay NFC cards can also store customer cards (“Billa-Karte”), so it’s multi-function. Is this implemented into Apple Pay? I think not.

So the payment with an iDevice would be:

That`s not an improvement to the contactless “swipe” I have right now with vPay NFC, which does both without fumbling.

Or what do I miss?

There’s no need to start an app when paying with Apple Pay. Just hold the phone next to the terminal, and keep looking at it (if it uses FaceID), or place your finger on the home button for verification.

If you have an Apple Watch, there’s no need to even provide biometric verification. Double-tap the button on the side of the watch, hold your wrist up to the terminal just briefly. Done.

Honestly, I don’t even care. NFC cards work for ages. What’s the benefit of Apple Pay?

Well, I use ApplePay with my AppleWatch. A double-press on the home button and no need to get my card out of the wallet, no need to enter a PIN, even when paying a higher sum.

When ApplePay launched in Germany in December, it took me a week to try it. Since then, I have made almost every payment with ApplePay. It just works, it is secure, my data is safe, it is fast.

As said, since my supermarket bonus card is on the NFC card, it’s just one step.

With Apple Pay: is the bonus card considered in the payment?

I just looked at the Apple Pay country list. Shockingly, Netherlands is not included but Kazakhstan is.

Maybe I’m not fully understanding the setup available to you. What’s a vPay NFC card?

In the U.S. — at least in my experience — Apple Pay and Google Pay are the most widely used forms of NFC payment.

Some store loyalty cards can be added to Apple Wallet; it depends on the store. So it’s possible to store them in the Wallet app.

Bank card (debit card) with NFC. vPay and Maestro are the most wiedely used forms of contectless/cashless payment in Europe.

As said, since my supermarket bonus card is on the NFC card, it’s just one step.

With Apple Pay: is the bonus card considered in the payment?

In this case, Apple Pay is indeed not of interest when your NFC payment card is not only a payment option but if it is also being used for receiving bonuses.

That is what I love about ApplePay: the store does not know my card number. The store does not know who I am. The store is not able to create a profile about myself so easily. That is something I like about ApplePay. I do not care about a bonus, but I care about my privacy. This is not meant negatively in any way, shape or form. It is fine to have a different opinion.

Like @Lars already has mentioned, vPay and Maestro are by far the most used forms of card payments in most European countries. I think that this is also one reason that it took Apple so long to get ApplePay started in countries like Austria or Germany: a (growing) minority uses or even owns a credit card. This is changing, but only slowly. In Germany, the “GiroCard” (have a look at Wikipedia) for a long time was the only card most persons did have. This sounds crazy and outdated, but the GiroCard was and is very secure, is capable of payments using a PIN code in combination with a built-in chip, NFC and what not. By the way, that is also the reason why you basically can pay everywhere with ApplePay in Germany: the terminals have been able to do NFC and chip/PIN stuff for years. A further advantage of GiroCards was (in the past, it has changed to some degree) that its use was way cheaper for stores, banks and to some degree even for the customers. Only in recent years, most banks extended their “local” GiroCard to Maestro or vPay. The German Sparkassen and Volksbanken (two big groups of banks) still have the most customers and do not support ApplePay because apparently they want Apple to support their GiroCards and cut out the middle man (Mastercard or VISA). A few weeks ago, they announced that they will support ApplePay by the end of this year. Rumors are that this will mean that Apple will support GiroCards then.

…That is something I like about ApplePay. I do not care about a bonus, but I care about my privacy. This is not meant negatively in any way, shape or form. It is fine to have a different opinion.

I completely agree with you on privacy. AFAIK the store does not get your card number, the terminal just says “payment completed”. And I think GDRP, which we thankfully have, is robust protection. On the other hand, Amazon knows way more about me.

I avoid customer/bonus cards with one exception: my main supermarket, where I also do most of my “cash” purchases. Getting -15% off a whole purchase (=a cart full of stuff) once a month is worth it for me.