Apple Silicon M1 chips are amazing. They have so much power. I am curious which of these chips meets your professional needs?

I imagine that the original M1 or the M1 Pro chip would be more than enough for most Music needs?

Q: What Chip would you need for your purposes?

Got the base M1 chip in the 13" MBP a couple months after it dropped and honestly it’s definitely enough for my needs (Python/soon Rust/Swift dev, student), combined with 16GB of RAM. Occasionally I wish I had even more power like in the M1 Pro when I’m compiling things or video editing, but realistically:

But overall I’m incredibly happy with my purchase, I came from a MBA (2017 i5 8GB ddr3) and the difference is night and day. Glad I skipped over the whole butterfly keyboard craze as well.

The M1 is way more power than I need. Went from a 2015 MBA to the 24” iMac. It’s been a great computer. I’ve kept the Air for my limited travel needs.

The M1 base chip wasn’t able to run Logic well enough for me. The interface was laggy and the more tracks I added the more it became apparent that it wasn’t designed for using with lots of high quality samples. The Pro hit the sweet spot for me, and performs great in Logic as well as for editing 4K.

The battery is just right, it lasts a full day for me without charging. I usually have around 10% left (after 10 hours or so).

Thanks for the Logic Update. And it looks like the Pro chip does get longer battery life than the Max chip.

How many Logic tracks are you talking about, for reference?

I think it was around 20 when it really started to become unusable.

Apple Silicon M1 chips are amazing. They have so much power. I am curious which of these chips meets your professional needs?
…

Yesterday I edited a training video in Final Cut Pro. I have the “original” M1 13" MBP and it works through it like a charm.

Other than that: Data analysis, a lot of photography stuff, everything is handled by the M1. The rest is presentations, emails, office stuff, … battery lasts forever.

This implies Logic is thoroughly parallel.

… It seems to me - as a mainframe performance guy - there are two ways to use a nice multi core machine:

The former seems much more likely than the latter - for a single human operator.

But I’d love it if there were more awareness of apps’ parallel proclivities.

(Also, it occurs to me some apps use GPU cores whereas others really don’t. Similarly, then, it would be nice to know which did and which didn’t. Though Mac OS probably uses GPU cores on apps’ behalf.)

The M1 base chip wasn’t able to run Logic well enough for me.

Interesting. This is a completely different take on that story. 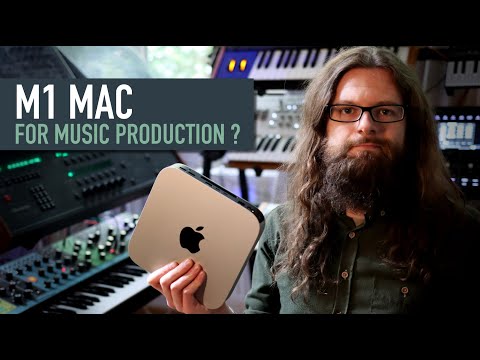 This was using Albeton and lots of specialist hardware, not just Logic.

That would mean Logic is not as efficient in using the Apple Silicon hardware as Ableton?

Stürzer mentions he was using the M1 Mini with 16GB for a streaming live performance of his (with OBS I think). The Mini handled both the videostream and a 30-40 track Ableton session which included several (rather demanding) virtual instruments, like Omnisphere, plus audio from his external devices.

That seems quite a load to me. And, according to Stürzer, the M1 Mini was able(ton…

) to handle this without issues.

No doubt the Max and Ultra will handle this even better though.

No, I’m not saying anything about the efficiency of Logic vs Abelton. I’ve never used Abelton. It is comparing different software from different developers.

Logic definitely didn’t handle 20 channels well, it was slow and unresponsive with spinning rainbows all the time. I tried rebooting, closing all other apps and no difference. This was just my experience and I found it unusable. I’ve tried this with my M1 Mini and my wife’s Air, and they both had similar performance issues (the Air was even worse, I tried it specifically to see if there was an issue with my Mini).

I also did not have lots of hardware handling the audio for me, the M1 alone couldn’t cope well, and when I added more tracks it got worse.

My M1 Pro handles the same workflow flawlessly with the same RAM, and that’s one of the reasons I chose to upgrade.

And it could have to do with the codecs being used and other similar stuff as well.

I know I’ve seen Screenflow import/export similarity-sized clips both lightning fast and super slow on my M1, and it seems to be format-related.

I think Apple has hard-optimized for certain encodings. I could be wrong, but that comports with my experience.

I got a 14" Max at launch. Not because I really needed the cores, but because I need the RAM (and I also sorta wanted to see what it could do with games if we ever got some Apple Silicon optimized games, for which I am not holding my breath…)

I run a marketing agency, so my workload mostly consists of endless browser tabs, Photoshop, Final Cut Pro, and Logic. The most important thing for me has been the 64 GB of RAM, as I really do push up against that limit fairly often. I could absolutely be just fine with an M1 Pro if it supported more RAM (and honestly, even just the vanilla M1 most of the time if not for the 16 GB limit.)

The M1 base chip wasn’t able to run Logic well enough for me.

When using Logic Pro, one issue that came up for me was the whether I needed to start Logic Pro with / without rosetta - to stay compatible with some older plug-ins.

Using Rosetta 2 it seem to make things slightly more sluggish, however it was still working great.

Was it necessary for you to start Logic Pro with rosetta?

No, it didn’t start with Rosetta. I just checked and it is running with Apple silicon binaries according to Activity Monitor on my Mini.

It also happens with any of my files that have many channels. I tried three different ones today and they all beach balled when editing, all stored on the internal SSD. I’m only using recordings done in Logic and Apple Loops.

The same files on my Pro have no sluggishness when editing at all.

OK thanks for the info.

Also - how much ram was on these varied devices - do you think ram might have been part of the equation?

I had 16GB on all of them, RAM pressure was always low using Logic, even when it was slowing down. With a really demanding track (30-40 channels) I still have around 4-6 GB free according to Activity Monitor.

Thanks for this info Rob