Geekbench has been ported to Apple Silicon and native speed test results for the Dev kit hardware (using a two-year-old A12 processor design apparently not bound for any new Macs) finds it natively running single-core at the speed of a current-gen MacBook Air, and multi-core at about 2.3x the speed of the Air. Bodes well for new Macs with new silicon. 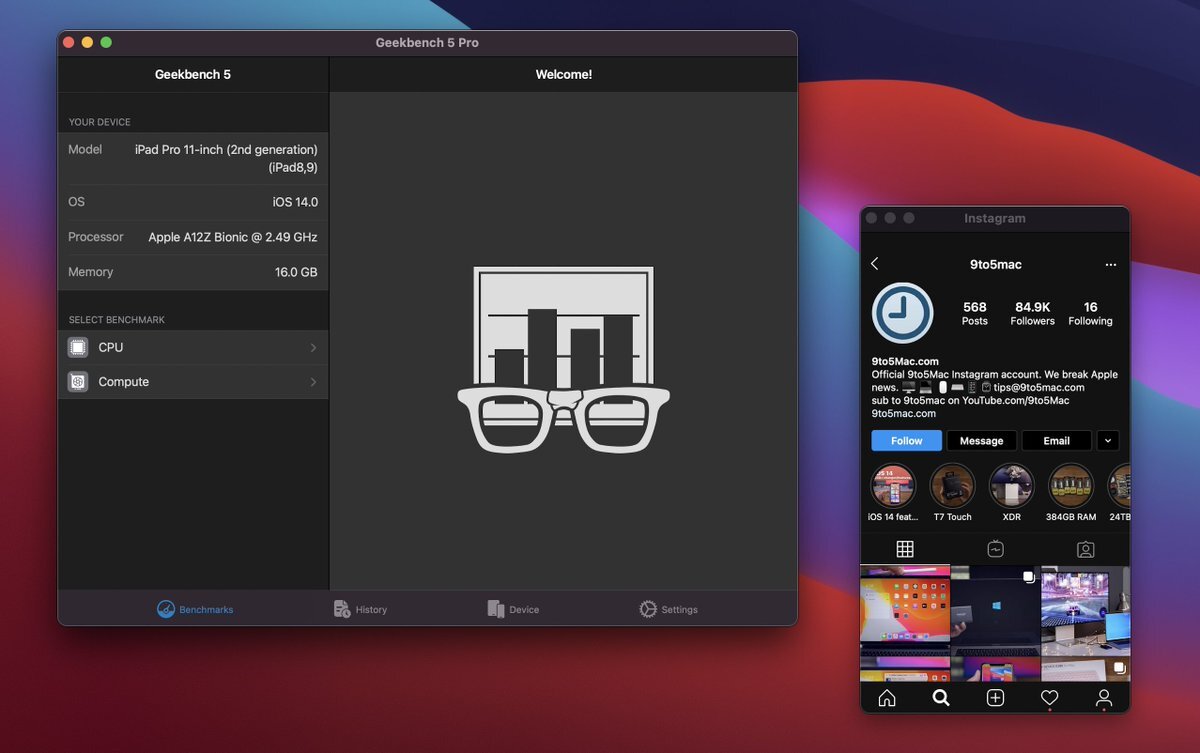 New benchmarks and details about iPhone and iPad apps emerge from Apple...

At WWDC last month, Apple officially detailed its plans to transition the Mac lineup to custom Apple Silicon processors. As part of that, Apple seeded a Transition Kit to developers, offering a Mac mini powered by the A12Z processor. New details have...

Would we also logically assume that the dev kit hardware probably hasn’t gone through a ton of detailed optimization? I.e. if the dev kit meets / exceeds the Air, that the actual release might be substantially faster / more optimized?

Right. We’re still deep in beta-land, using old hardware. (The next low-end iPad is rumored to be using this 2-year-old chip, which was originally put in the iPhone XS, XS Max, XR and 2019 versions of the iPad Air and iPad Mini.)

New Apple Silicon with an optimized macOS ought to be, in new native apps, like a nice speed bump over current MacBook Pros.

As it usually takes Apple one revision to get things 100%, I will plan to upgrade my Macbook Pro top of the year with Intel chipset especially since I want to have it being a dual boot system running Windows. My main issue is to get the maximum RAM as the previous 16GB is painfully too small.

Not interested in fast tracking this as it will take years as it will have their own silicone along with porting IOS apps over along with the reduced geometries need for power consumption reduction. I will forecast that these chips will be manufactured in the upcoming AZ TSMC factory which is scheduled for production in 2024 and fabricated in Taiwan until the plant is up and running

“Strike early” or “strike late”? That’s the dynamic here. Personally I want to be going up the learning curve in the first wave on this one. But your POV is the opposite. My experience is the earlier you adopt the firmer your understanding.

(For me 2021 looks like “replace all the kit” year anyway. So starting on a new basis feels natural.)

Flakinesswise, I expect a fair amount.

I don’t expect much more than the last two transition: speed bump over past processor, speed cut under emulation.

Most people don’t care about silicon used, they want their apps run properly, so the last two times Apple never made a splash about chips (what Jobs called ‘speeds and feeds’) but focused on what new machines would accomplish.

I’d expect the splash to focus on running iOS apps, not on fancy silicon speeds.

Yes two mindset’s of earlier adopters or not. My profession as a Test Development Engineer places me on the bleeding edge of technology and as such I need to rely on apps to assist me in streamlining my work. Typically to test various electronic parameters it takes about 4x improvement which is quite challenging and exciting at the same time.

So as you can imagine, I just need to rely on my tools to work and not add either another variable into the equation or take away my focus.

In effect what you as many others are doing are being the Test Engineers for Apple that definitely help polish the next move forward.

I am fortunate to have a job that allows me to satisfy my technical exploration and creation endeavors and appreciate others like yourself to debug the next wave moving forward.

I need to run Windows on my Mac for a small selection of software so I would imagine there may be some compatibility issues on doing this on a Non-Intel processor.

I just missed the availability to expand RAM to 64G as this is my biggest issue. I use “Memory Clean” in the menu bar to read the ever decreasing memory out of my 16G RAM that causes me to have to reboot every couple of days. The biggest memory leaker is Google Chrome