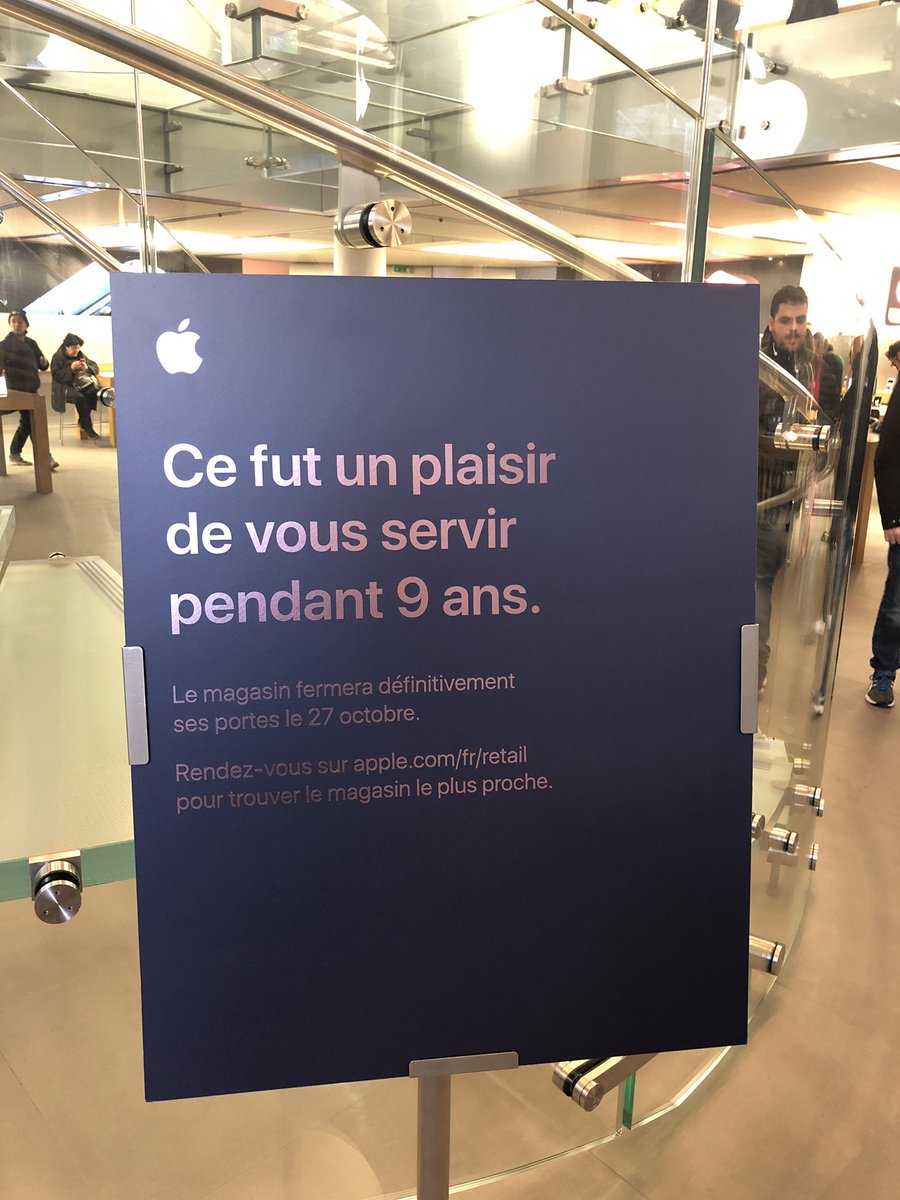 It surprising to see this sign in Paris Le Louvre Apple Store ! This apple store is in a very specific place, it’s the Louvre! I’m wondering what happened… It closes after 9 years on 27 October, and the sign appears just after Tim Cooks meets arrived in France last week.

I’ve been to that store several times - once to upgrade my MBA to Lion as I was working at Disney at the time and the Wi-fi in my apartment there was not up to downloading the installer! While the store was always crowded I got the impression it was mostly tourists looking for free Wi-Fi rather than customers - perhaps that really was the case?

They are just moving to Champs-Élysées, to a bigger one.

This was announced the beginning of the month. I think I heard it was due to rent increases, but I can’t remember where I heard (or maybe I dreamt it

) so it could have been a rumour and Apple are just moving to a bigger store.

Apple today announced that its retail store at the Carrousel du Louvre shopping mall in Paris, France will close permanently on October 27th. The store’s imminent replacement was announced in September, but no definitive date was given at the...

I’m French and I have been to that store a few times, and I will tell you I will NOT regret it. I have never had a good experience there. The staff was harsh, you were not welcome to stay and work there while waiting for your Genius Bar appointment, I have been misled a few times concerning wait times. Started taking my business to Apple Store Opéra, which was providing the kind of service and welcome you expect from Apple.
There is indeed a new store opening on the Champs-Élysées. I hope it’s not the same staff, or that they get a good training session before moving there.

The staff was harsh

Interesting, I had that experience too with a member of staff getting very angry that I tried on the demo headphones that were out on display (over ear ones), I was told they were just for looking at - despite them being hooked up to iPod Touches

It’s a shame that my experience wasn’t a one off!

It’s not Apple, but the French!

It’s not Apple, but the French!

After Vienna, the city renowed for terrible service, you might not even notice.

It’s funny people say that because I’ve lived here for over 3 years and have yet to experience it!

Wow, I’m sorry you had a bed experience. However, it looks like you met some real parisians :-/

Well, thank you…
No, it tends to be Paris.

Well I have to say that it is not a bad thing and this store will not be missed. Getting there was always a challenge as you had to navigate through very dense groups of tourists.
I went to the new Champs Elysées store last week and it is very impressive ! Apple definitely is a leader in terms of retail. I had an appointment at the Genius Bar there and even though the place was packed, everything went very well and the staff was friendly as you would expect.