Hope this is the right place to post this. I’ve taken the liberty to restructure what you have posted. The primary issue is that you are opening and closing the files in TextEdit when you should be making a new document and saving it. I’ve also moved the Obsidian vault reference to a top level so that users have one place to change it. Finally, I collapsed the structure to a sequence of what are called run handlers, each completing their own focused goal.

I recommend getting ScriptDebugger if you are at all serious about continuing with AppleScript programming.

Hope you find the changes useful.

Wow thank you! Yes that’s all over my head at the moment.

I’ve tried to quit Omnifocus a few times now, but what keeps me around is the combination of privacy and quick capture (from the ios share menu or global shortcut on Mac - and of more than just text!)

I keep trying to design “quick capture” shortcuts for both ios and Mac to send everything to DEVONthink, but haven’t been able to make anything nearly as quick and reliable.

this is my solution to keep OF as the catch all bucket, Even though I want most of that info in DT / Obsidian

FWIW: I would like to build a plugin that keeps certain Obsidian files and OmniFocus projects in sync. I think it would be really neat to use Obsidian ^block ids as a UUID for tasks in OF, and then OF can be a viewer for tasks in Obsidian while your Obsidian vault remains the “source of truth” for your tasks.

It’ll be a while before I get to play with these ideas, though!

This is great, thanks.

This would be an awesome plugin!

It’ll be a while before I get to play with these ideas, though!

Even so, your end result will likely be posted long before I can even begin to understand the principles behind it.

Glad to have you take interest in this.

What are the main draws to OF for you?

I stopped using it a couple of years ago, but in terms of this plugin idea, I think of it in terms of the Model-View-Controller concept: OF would be a great View, and sometimes Controller, for tasks I store (Model) in Obsidian.

Theoretically you could build a similar interface for viewing and editing tasks in Obsidian, but it’d be a lot of work!

How to modify this script to just copy the outline to clipboard? (or open in new file in Drafts?)

I believe you might succeed by changing TextEdit to Drafts.

Otherwise, remove all write statements, simply append the collection of text to a string variable, and then put the final string variable on the clipboard.

Let me know if any way can contribute or parts having trouble with, I’ve been working on this as well.

Sorry for the delayed response! I have been playing with ways of building the features I like about OmniFocus directly in Obsidian instead of trying to maintain a bridge between the two apps.

I now have ways of setting review and do dates for items in Obsidian and managing those using Dataview tables. It is working fairly well, though it isn’t shareable yet.

I’m REALLY looking forward to seeing the result of your efforts to build OmniFocus functionality into Obsidian.

I continue to look for ways to integrate my use of Obsidian, Omnifocus and DEVONthink, but with limited success. (I.e. functioning prototype, but still far too fussy, requires too much human intervention.)

I’m I correct to assume that you are making use of individual (atomic) notes as the basis for tasks (or at least mini-projects)? And then using dataview or dataviewjs to

Sorry for the delayed response. I aim to write up what I’m doing when it stabilizes (getting there, believe it or not). In the meantime, to answer briefly…

As is probably obvious, this requires a little bit of set up, hence why I haven’t shared it in full—writing it all up will take bandwidth I don’t have at the moment. I’m happy to try to answer specific questions if anyone has any!

I’m very eager to see what you create!
Personally, I’m migrating more and more to Notion. I know it’s not in the spirit of all the things we love about Obsidian but… an example of “bandwidth” usage:

I’m growing lots of veggies & flowers. But starting seeds indoors is somehow incredibly challenging so I do a lot of experiments & take a lot of notes.

In obsidian each experiment is a dated note, with metadata, maybe with a picture attached, all organized by dataview. Not a huge project setting it up but definitely a half hour here and there to arranging the fields, fussing with dataview code, etc.

Of course every modification to the metadata fields means finding the corresponding formula and updating it too… remember where each dataviews lives, click into the code, keep your glossary handy…

Not my first time setting up something like that, but probably a Couple hours total, and I’m left w something difficult to update (re metadata fields for example).

“how long would this take me in Notion”

I recreated the entire system in one trip to the toilet.

On an iPhone.
Writing this post took me longer.

Tap add page
Tap add database
Tap to add a few fields, drag them to where I want to see them…

Not actively using Obsidian, are other Kanban targets feasible? for example Trello.

I say “feasible” as I’m not necessarily asking anyone to build me this.

OT – I use this shortcut to put the tasks from the OF Forecast perspective onto the clipboard as markdown links. I call this shortcut with a Typinator expansion (.daily) that builds the content of my daily note by running this OF shortcut and other automation to gather info needed to start the day. 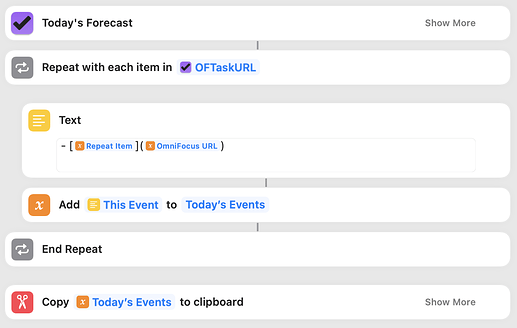 Not actively using Obsidian, are other Kanban targets feasible? for example Trello.

I have set up Kanbans in Curio. The setup requires that you administer the cards manually. The connections between OmniFocus and Curio cards are handled through AppleScript. 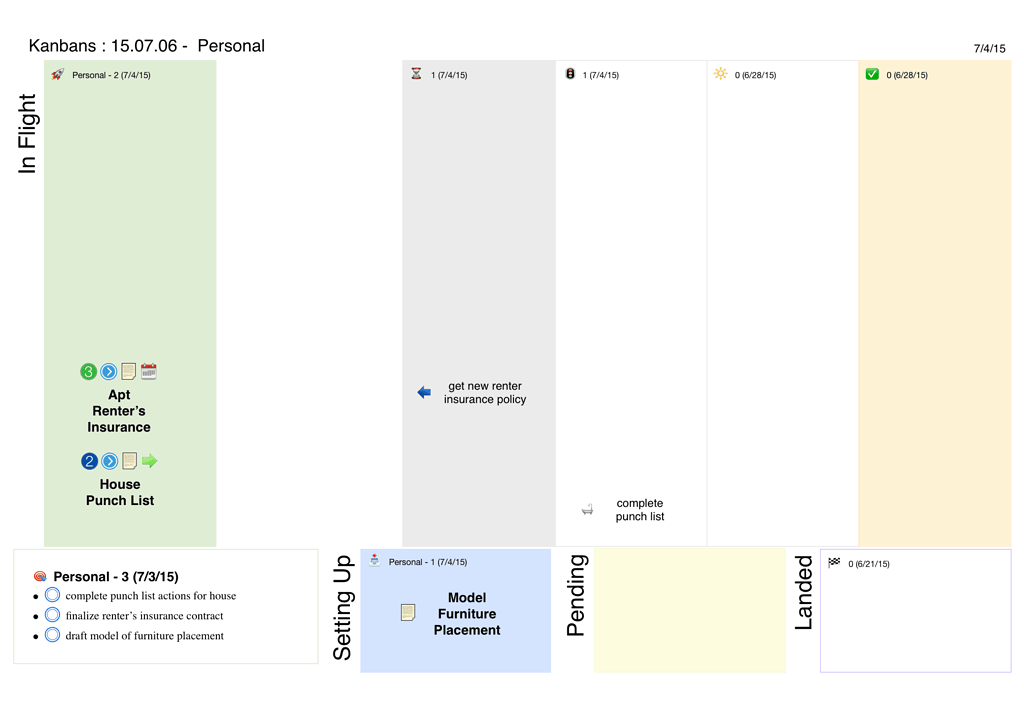 Kanbans in Curio - An Example of My Current Layout

I long ago promised a revision to my Kanban board posting version 1. A full updated posting (with video and discussions and such) may unfortunately be a while longer in the works. In the meantime, as a start, below is an image of my most recent...

Updates to My Public Curio Repository

I have taken a moment to update my public repository for Curio documents. I have deleted what was once posted in a public DropBox folder and moved some contents from it to the Google drive above. The Google drive also contains older documents. The...