BlueTooth audio the bane of my existence

I have no more fight to fight. I need your help. Bluetooth audio has defeated my mind on my iPhone.
I’ve bought Bose in ear blutooth headset.
Plantronics disovery 970
And Apple air pods

When I want to take a phone call the Audio rarely works over blutooth. On any and all of the blutooth sets listed above.

I’ve even gone as far as wiping device and reloading from scratch. Other blutooth things I have , Tile trackers, Automatic Pro, Apple Watch.

For some clarity, what does “rarely works over bluetooth” mean?

Does it either work 100%, or not at all?
Or does it mostly work, but the audio quality is poor?
Does the same thing happen with all your bluetooth headsets/audio gadgets?
Or is their a variance between them?

Have you connected and tested those audio devices with a different iPhone, to see whether the problem is sitting with the phone, or the devices?

Lastly, what iPhone do you have, on what iOS, and has this problem occurred across different iOS versions?

I’ve had weeks were I’ve been on 5+ hours of conference calls a day using my AirPods with absolutely no problems.

Are you running the beta of iOS 12? Remembering back to a previous iOS beta, I recall having issues with BT audio devices. Specifically with packet loss that presented as stuttering in the audio. I wrote that off to the facts that betas log aggressively and that my device was warm to the touch. In the end, the issue was fixed in a later beta.

Like @BradG, I’d be curious for more detail on what “rarely works” means

I can get bluetooth audio for Music, most times. sometimes for Air Pods i have to unpair and repair to get audio.

I cannot get the phone call to use the bluetooth headset. i call people all the time with my headset in my head and no audio comes out of the headset. the top right button shows Air Pods, you see the air pods is connected on the top bar but NO Audio, no one can hear me until i switch to Speaker or IPhone Audio.

The way i know if its going to work - i’ll try siri, if Siri uses the phone mic and speak to answer i know its NOT going to work. I usually have to jockey around with audio things to get this to work. When i do Hey Siri, i see the bluetooth icon on bottom right, i’ve tried toggling that between Air Pods and whatever the default is, but that does NOTHING.

Or does it mostly work, but the audio quality is poor? it works or it doesn’t work.
Does the same thing happen with all your bluetooth headsets/audio gadgets? call audio/mic works fine over WIRED headset.

I have not taken these 3 bluetooth headphones to other devices. all 3 headsets were purchased new by me.

iphone 7 + iOS 11.4.1 but i’ve been having this issue well over a year. probably 2 years. This issue has hit me where it hurts, I had voice recordings of the Dr’s telling me i was having a baby girl, and our reactions. I did a manual backup in March of 2017? to Nuke & Pave. Since i have a stupid 256GB SSD, i deleted the iTunes backup in my haste i lost a ton of great irreplaceable Voice Recordings. and Time Machine won’t go back that far, shame on me, and BackBlaze doesn’t keep revisions that far back. 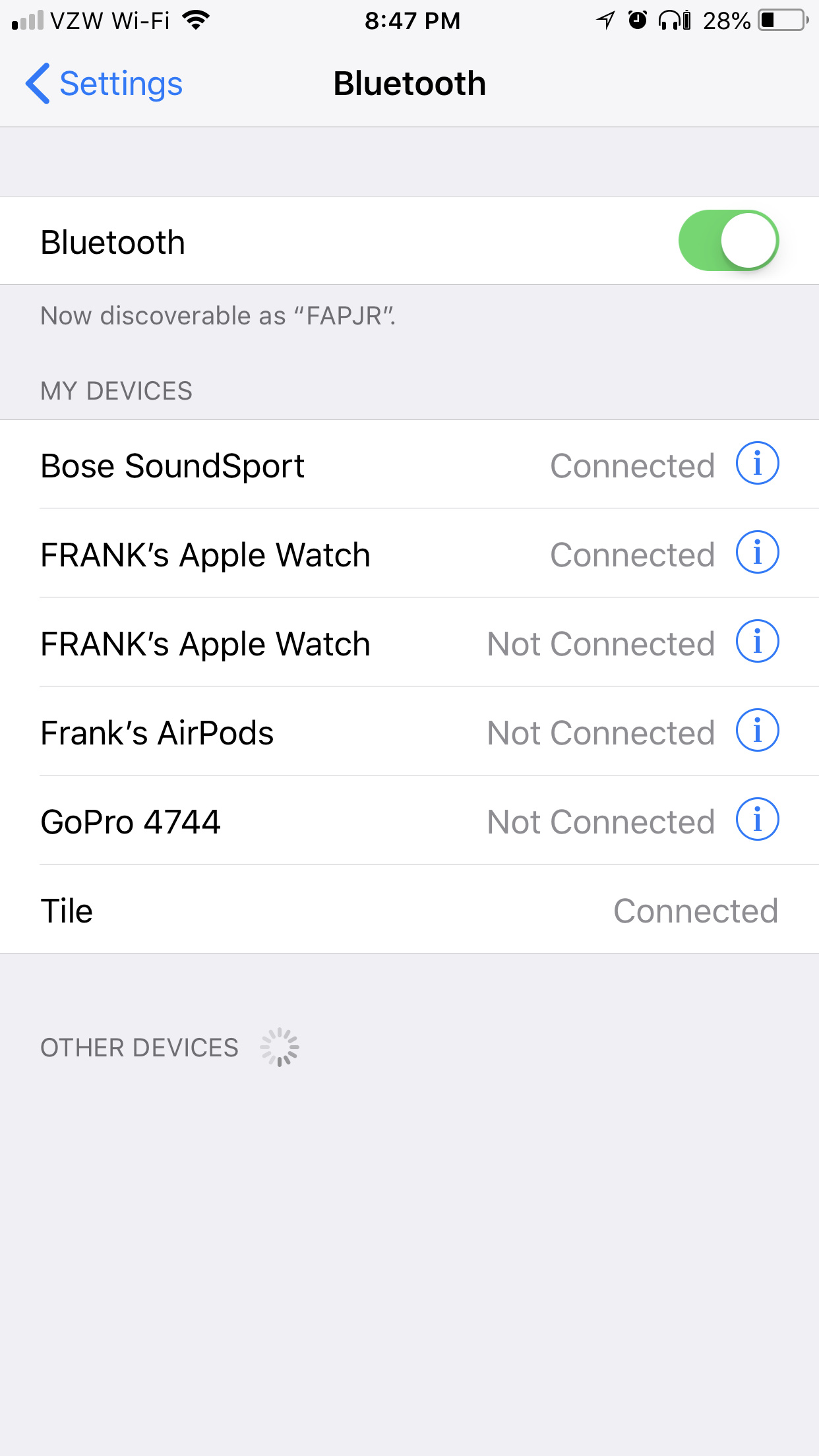 I have a few more things than I remembered. I’ve tried disconnecting the tile, gopro from this menu. But it didn’t seem to make a difference.

Tap the “i” icon to the right of the BT device and see if you can prioritize its function.

Under the round I, it just says Forget this Device for all the blutooth devices I have listed.

All I can say is that in my 2(?) years of using the Airpods, and earlier BT earphones before them, I can count on 1 hand the amount of times I have had any issues that weren’t sorted by either: removing/replacing (Airpods) in my ears, switching BT on/or, forgetting/repairing the device, or rebooting the phone.

I can only think to suggest you pair these with a different phone, to check if the issue isn’t related to a hardware issue inside your specific phone.

That said, why are there 2 AW’s listed under your devices?

That’s my old Apple Watch. S0, and my S3 is the Connected one. I will pair the AirPods with Work IPX today and call some sales guys.

I’m really thinking its some Tile compatibility issue. I can’t honestly recall how long i tried the phone without ALL my Bluetooth devices after the Nuke & Pave. Like a dummy i probably loaded everything tile, apple watch, and all headsets and gave it a try.

I’ve had terrible luck with Beats branded bluetooth. Powerbeats 2, Powerbeats 3, Beats X — they all were very flaky. The headphones would work fine for music but randomly disconnect while on a call. The call was still active, but the input/output changed to my iPhone. My Bose QC35, AirPods, SleepPhones and a variety of portable speakers have all been rock solid. I went through phone calls with both Apple and Beats tech support (yes, they’re different for some reason, or at least they were). I received replacements for the PB2 and PB3 with the same issue. I finally just gave up and switched to AirPods since my wife wasn’t using the pair i had given her for Christmas (no, that wasn’t a strategy).

Made about 5 more calls. I can start the call on the phone take buds out of the case and 2 rings later audio is going over the AirPods. This is almost never my experience on my ip7+.

I’m dealing with this now (Powerbeats disconnecting from Phone X on calls, podcasts, videos), and after several chats with support and visits to Apple repair I’m moving on as well. Will check out these referrals sans AirPods which don’t stay in my ear. Still stand by your current solution?

Still stand by your current solution?

I’m still using both AirPods and QC35. The QC35 have the best Bluetooth connection with my devices. The AirPods can be a bit fiddly and I’m getting a fairly short run time from them now as the battery is used more and more. I love the QC35 so much I even wear them in bed when a certain someone starts sawing lumber next to me in bed. Not the most comfortable in that situation, but they work well.