Bug has died behind my monitor screen

This is mostly just a post to share my woe, that my new (<3 months old) monitor now has a dead bug behind it, near the middle of the screen of course. Why do bugs insist on going behind the screen and inevitably dying?

I half-heartedly googled what to do (I’m not taking this monitor apart so it was a pointless exercise), and found this hilarious article about someone also suffering: https://kotaku.com/i-squished-a-bug-inside-my-monitors-screen-and-now-i-wa-1796152848

(If you do have any top tips for how to get rid of a dead bug without taking the monitor apart, please speak up!)

Jason Snell once had a Spider in his iMac Pro screen. He had to send it into Apple to have it removed.

Many years ago, one of those nice “guys” (Thrips - Wikipedia) ended up behind the iMac’s screen.

It was still alive and the tip I stumbled upon was to shut off the iMac, to place it into a dark room and to place a light outside of the ventilation holes. The nice “guy” was able to escape or to move to a place that was not visible from the outside of the Mac. Phew!

But dead is dead.

I do not think that there is much you can do…

I’m jealous that you managed to get yours out

It’s a thrips that I have too. We call them “thunder bugs” here (here being the midlands in the UK). Unfortunately this is rural arable farming country and they are everywhere when we have a heatwave and the farms start bringing the harvests in. I’m going to remember your tip if any more decided to try and make a home in my monitor. Maybe they will go rescue their friend and move that one too

Ok that is much much worse than my monitor. I might have just left it outside and run away.

We call them “thunder bugs” here.

That is funny. I tried to find the English translation for “Gewitterwürmchen” (colloquial German word for those nice creatures) and I stumbled upon “thrips”. If I translate “Gewitterwürmchen” literally without a dictionary I would end up with “thunderstorm worms”, so quite similar to “thunder bugs”.

A coworker once used the same trick to encourage a small insect to leave her child’s ear.

Ha yes it works for this too, I work in the environmental sector and that’s the ranger advice we give if you get a bug in your ear. Just go somewhere dark and shine a torch near your ear. 90% of the time that will do the trick.

Ahh interesting. We probably stole the name from your ancestors

I had this on a 75" TV a few years ago. Thankfully (and amazingly), SquareTrade covered the replacement. Now that TV is in the kid’s playroom. I was able to “massage” the screen in such a way that the bug eventually fell out of the display area. I hope you’re able to get yours “solved”!

I’ve unironically taken apart an LG 43" monitor to fix this problem. And it was easy and no-fuss. Here are roughly the layers of an LCD. 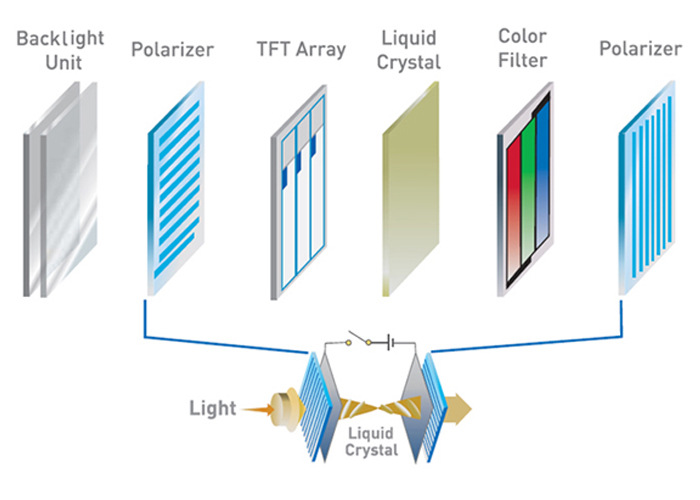 On the monitor I disassembled everything just needed to be unscrewed and then lifted easily, no glue or anything like that.

My only big tips would be to wear nitrile or latex gloves, and not take the entire LCD or backlight out of the monitor. You don’t want to handle it any more than necessary, put fingerprints on it, or allow dust specks or debris to get in. Those things would produce their own artifacts on the screen once you put it back together. Obviously you don’t want to trade the bug for another artifact. Just lift the screen a tiny amount gently, get to the bug with the gentlest blast of air duster or the gentlest swipe with a microfiber cloth, and then put everything back in place.

This is really interesting, thank you for sharing. I can see this is easily ending with my bug being replaced by an accidental fingerprint though (even with gloves

A second bug has arrived next to the first today. This monitor is doomed!

I am actually wondering if some monitors are more prone to this than others, and maybe I just don’t buy a Samsung monitor again…

Check your kitchen for fruit flies?

We have (now had, I guess) a similar problem with the previous generations of curved-back iMacs at our factory. It is a dusty environment (very fine paper dust) and all that is presumably sucked in by the cooling system which leads to symmetrical dust patterns in the lower left and right corners of the display. Inside of course.

Stopped trying to do something about it and accepted it as an occupational reality.

Oh that sounds really annoying! I must admit when I was watching my new friend roam around my screen yesterday, I did seriously consider taping up the whole monitor and waging war, but it occurred to me that would probably be very bad