I am thinking about making Chrome my default browser. Has Google made it more efficient, and does it perform better on M1 with less
Battery drain than before? Want some information before I commit. Thx

Use Brave instead. No issues on M1 and full Chromium browse functionality incl. extensions. Chrome on any platform will come with the advertising and tracking overhead that is Google. Start with default Brave and slowly work your way through the settings locking things down so you have a comfortable browsing experience. I have no issues with it slowing my machine or my browsing experience down

Same here. Brave plus a tab manager if you’re a compulsive tab hoarder.

Brave’s default privacy stuff works better for me at blocking weird popups and such than any browser extensions I’ve seen.

Personally I try to stay away from anything Google – not because of battery drain, but because of company ethos – but I’ll be curious to see what others say. The closest I come to using Chrome is that I rely on some electron apps, regrettably.

Right now with the same tabs open in both Safari and Chrome I have 2.35 GB of memory used in Safari and 1.5 in Chrome. I realize this means, almost, nothing. If we all did measurements though it could be meaningful. Haha.

I have a desktop and don’t notice Chrome taking up power. But then again, I don’t keep track with much concern.

@simonsmark @webwalrus how do you guys find RAM usage with Brave?

well if it makes you feel better Electron apps are more Microsoft than Google if you want to assign ownership to an open source product!

I have not noticed the old memory/power issues with Chrome in recent past. I think they have gotten a pretty good hold on that. I stick with Safari on desktop because I do so much work on iPad Pro and like how they work together.

I’d love to hear more — I don’t know much about this at all, besides the commonly held wisdom that electron apps essentially include the chrome browser and that’s one of the reason why even basic apps written in electron take up so much disk space and ram. So that’s why I was saying that using them comes close to using chrome itself. Is that inaccurate/no longer the case?

The tech is actually maintained by GitHub which MSFT bought. It is pretty much the rest though as you said though, and Microsoft Edge also runs on Chromium.

Electron (formerly known as Atom Shell) is a free and open-source software framework developed and maintained by GitHub. It allows for the development of desktop GUI applications using web technologies: it combines the Chromium rendering engine and the Node.js runtime. It was originally built for Atom. Electron is the main GUI framework behind several open-source projects including Atom, GitHub Desktop, Light Table, Visual Studio Code, Evernote, WordPress Desktop, and Eclipse Theia. Electron ...

It’s worth distinguishing between Chromium and Chrome. Chrome is Google’s browser. Chromium is the open source flavor. So some of the concerns (privacy, etc.) with browsers like Chrome may not be present in the open source version. 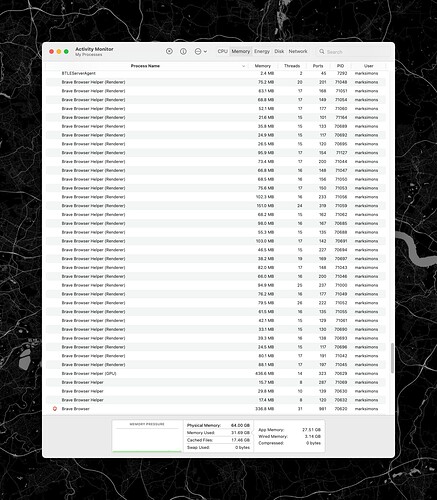 Chromium is the open source flavor that Google still pretty much controls…. You would not argue AOSP (andorid open source project) is not google would you? Google has been pretty good steward of it, but still Google.

Same here. Brave plus a tab manager if you’re a compulsive tab hoarder.

Been using Workona as a tab manager. Pretty slick on Brave and with the ios apps.

Great info! any ideas if RAM usage increase if you have PWA’s as opposed to site just being open as tabs?

I would intuitively assume that PWAs and sites siloed via apps like Coherence and Unite would use more RAM than just having tabs open, largely because all the overhead of the browser itself has to be loaded for each one. That would add up over time.