Some of the extensions I use (e.g. Push by Zapier) are only available on Chrome. However, I like the new privacy features on Safari and I’m increasingly wary of Google.

What browser do you use? Have you made the switch from Chrome to Safari?

Safari. I used Chrome back when I was on the PC and stayed with it for a while when I switched to Mac, but I eventually migrated to Safari. Now I only fire up Chrome for sites that don’t play well with Safari (increasingly rare) or which don’t play well with Ghostery (easier to launch Chrome than have to remember to swithc Ghostery back on). Most of my Chrome usage is actaully Google Maps, which seems to work a bit better there than on Safari.

My usage is pretty much the same as Chris above. On my Windows PC at work I still use chrome, I do some web development and I’m used to the debugger there. I used to use it on the Mac as well but have switched to Safari there. What gave me the push was the difference in battery life on my MacBook Pro. I first switched on the laptop and then on my iMac at home.

I switched to Chrome a few years ago when some of my most visited sites wouldn’t load (or would load extremely slowly) on Safari. I tried switching back a few months ago but had to come back to Chrome because there are too many useful tweaks (like remembering how much I enlarge or zoom out on a given site) and extensions I have installed on Chrome that have no equivalent on Safari.

I use AllowCopy as well as AllowRight-Click to get past websites that deactivate it.

I use AutoplayStopper to make visits to websites more pleasant.

dotEPUB turns any web page into an epub.

EXIFviewer puts a tiny icon in any photo that has EXIF data. Click on the icon and you get useful (esp if you’re into photography) info. Example: 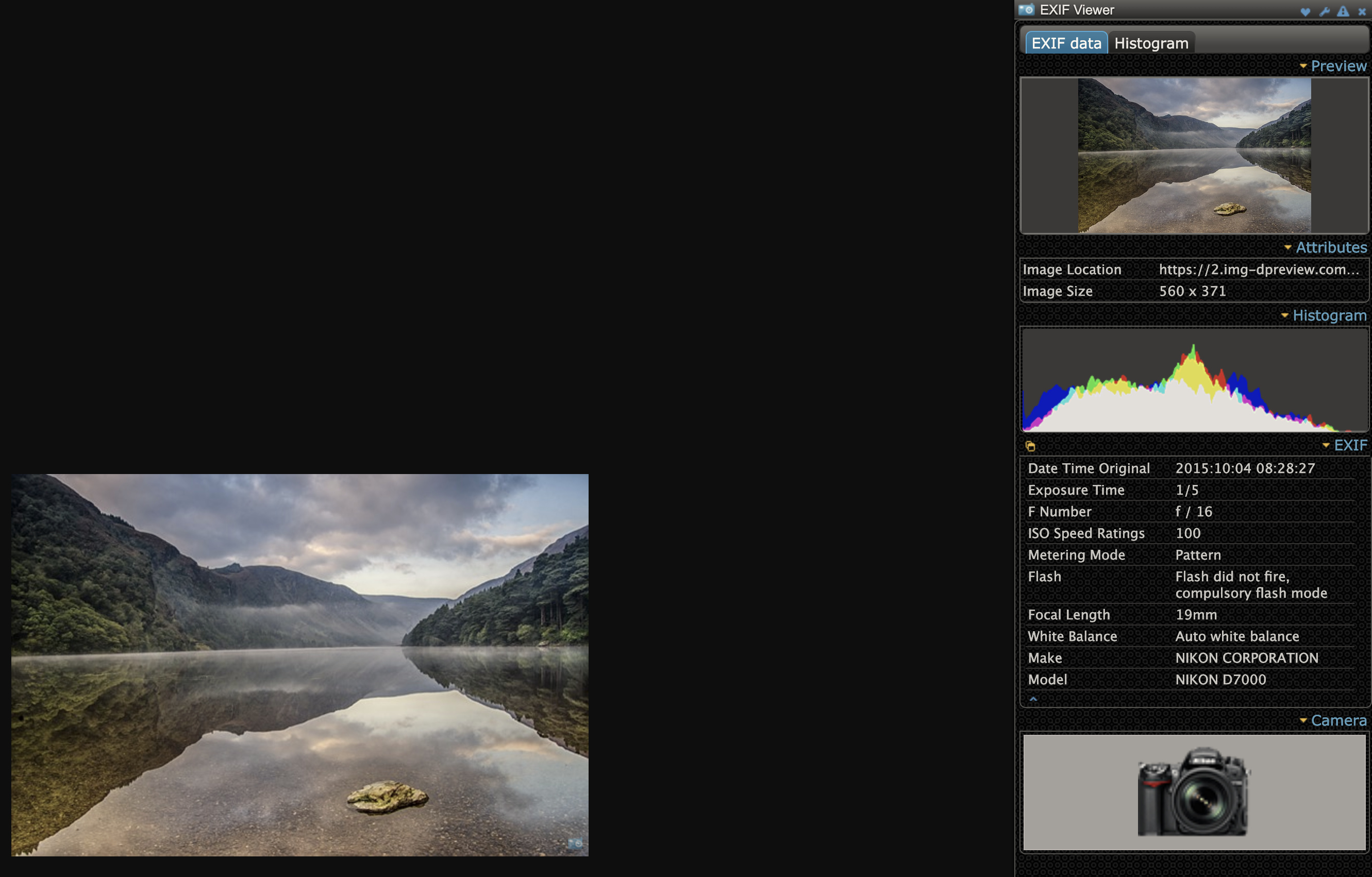 (Safari used to have an EXIF viewer extension, but a recent version of Safari broke it and it was never updated.)

I use G-Calize to make Google Calendar prettier.

I use GoogleTranslate to automatically translate any web pages in languages other than English.

I use Google Voice, and there’s no extension for Safari. The Chrome extension lets me read and reply to texts from within Chrome’s menubar, and lets me read transcriptions of voicemails.

I use the RSS_Subscription extension to light up if a site has an RSS feed, and lets me grab it to apply to my feedreader.

I use DarkReader to tweak all my web pages to make them contrastier, and to give individual sites of my choosing a Dark Mode. Here’s Appleinsider.com: 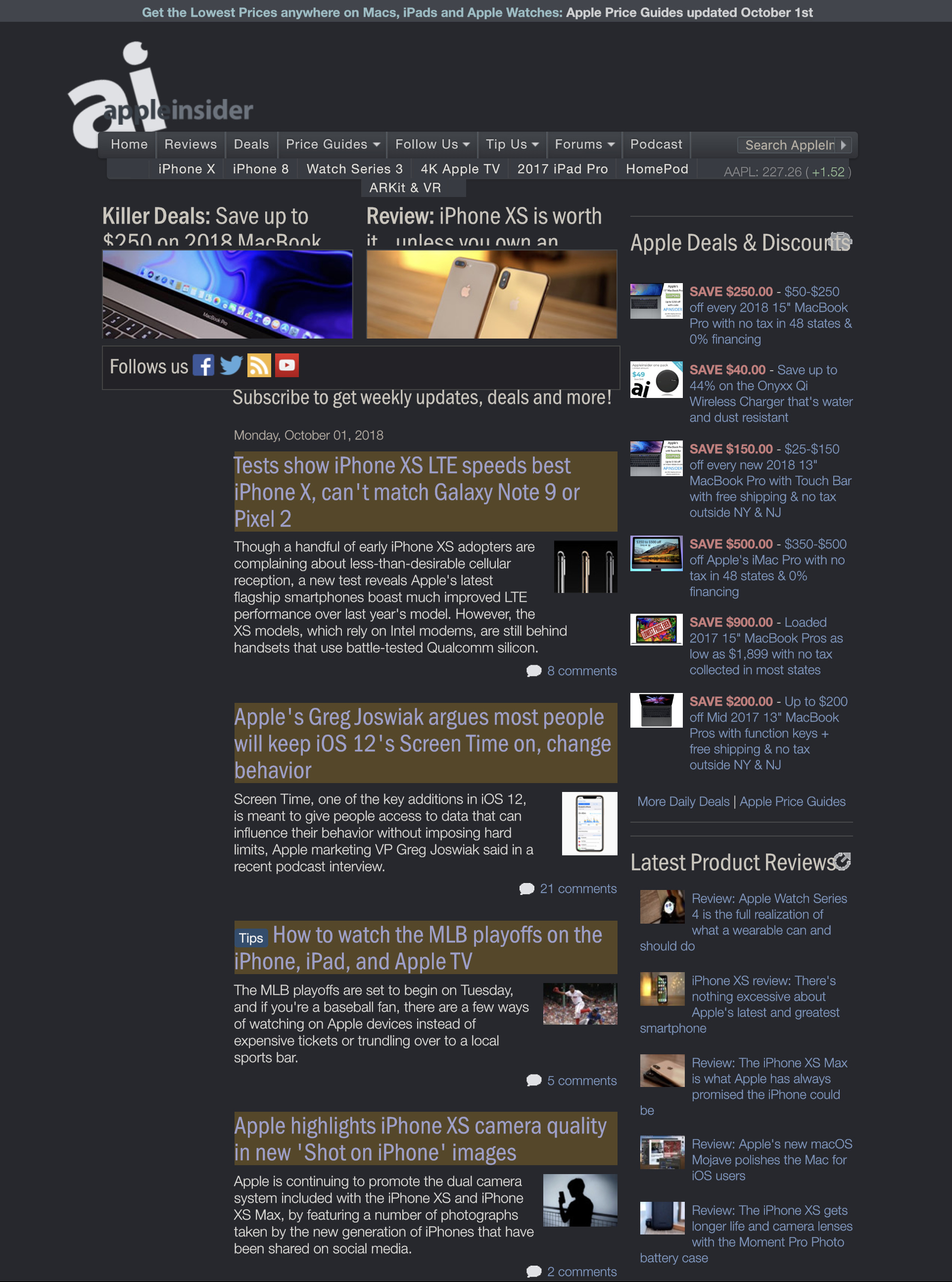 Safari all the way for me. I am trying to stay away from Google as much as possible. Safari won’t be tracking my usage.
Google Dev tools are superb though, way better than Safari’s. But I managed to get the same experience re: dev tools on Firefox. No Chrome for me on Mac.

I use Chrome everywhere, Chrome has the hands down best debugging tools of all the major browsers, and the V8 JavaScript engine is amazing, I don’t see the need to use a seperate browser for non development work

On Mac and PC I use Firefox. Stated using FF while it was in Beta and up to a point some years back where it got truly horrible. Now it has a new engine and works nicely again.

On iOS, Safari. Needed to access my Google account, so I started up the current build of iOS Chrome. The Google acct page told me to please install a current and supported browser, and did not allow me to proceed

I am going the exact same thing.
Wish I could modify the appearance of the Chrome menu bar to bright red to remind me that I am on a “unsecure” browser…

Safari because I use a laptop all day and rarely get the chance to plug it in. I need the 3-4 hours extra battery life (I tested Chrome a couple of weeks ago for a working day and lost 3 hours compared to when I use Safari)

This is me. I avoid Google services wherever I can. Safari on my MacBook, Firefox on my gaming PC. Would just use Firefox across both, but you can’t compete with Safari in terms of battery life on the MacBook Pro. (In my experience anyway)

Safari for personal, Chrome for work (we use G Suite).

This isn’t particularly for privacy reasons, it’s mainly because there is a very large difference in battery life; Chrome just kills my Macbook Pro (not as much as Logic etc, but it’s only a browser and the difference is significant).

Chrome has superior WebDev tools to any browser, but it is quite slow, memory and battery hog. As a browser… lacking Reader View, share button - overall, not very comfortable. I would stick to Safari as a private browser. In fact, I have a script in KM which switches default browsers based on WLAN network just for this exact reason.

Interesting, would you mind sharing this script?

Had to put them on Dropbox, since I can’t upload them here. They are actually pretty simple - just entry the SSID of your home/house network, which is the trigger. The most-low AppleScript part is there to click “use” button in the appearing dialog.

Safari for normal browsing. Old version of Firefox for doing SQLite database stuff with the SQLite Manger Extension (disabled in the newer versions.) Chrome only under duress.

The Google acct page told me to please install a current and supported browser , and did not allow me to proceed

Due to App Store restrictions the iOS version of Chrome uses the OS’s built-in version of the WebKit engine, rather than Chrome’s own engine. You get Chrome features like bookmark sharing and other stuff that’s built on top of the engine, but under the hood it’s basically a reskinned version of Safari.

Safari on iOS and Mac for me. Love the „read on“ function when switching from mobile to Mac and vice versa. (Yes I know that Google can do something similar.) For PC and Web dev stuff I‘m on FF with some extensions (like firesass), Chrome sometimes when in need of login and not logged in at the same time, Opera only for testing purposes.

Both Chrome and Safari

Bing us surprisingly useful, by the way.

And I also have a bookmark for a StartPage search; StartPage anonymously grabs results from Google and mixes them into your results, yielding a good experience as well.

I used to use Chrome (now replaced by Firefox) for dev tools and locally hosted websites.
But when it comes to real web traffic where Google is monitoring, I tend to use Safari.