What thoughts do others have on the soon to be released Claris Pro platform? This will be FIlemaker Pro (which is owned by Apple) re-branded as Claris Pro, with a freemium pricing plan and both Javascript capability and integration with Apple Shortcuts.

Will this be a winner both for Mac automation and a winning solution for personal/hobbyist type development of custom apps? 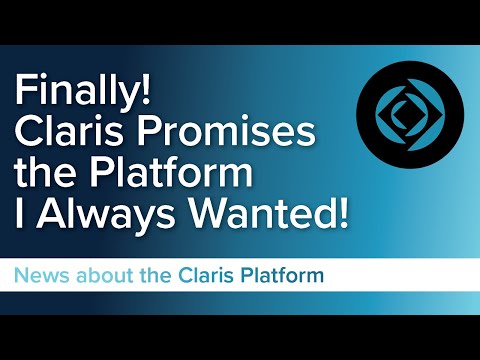 My first thought is, to name it “Claris” might be the dumbest they could do!
Searching for that name on Google, gives a couple of results with that name already, like Coffee-Machines, software for Car Dealer and I don’t know what else.
So they risk to end up in the same way, Ulysses for example sticks in, with having so many different other results on a web search, that the customer will get trouble in getting informations, or find some support for the software.

Will this be a winner both for Mac automation and a winning solution for personal/hobbyist type development of custom apps?

I’m definitely going to check it out.

Filemaker evolved from a database to a low-code app builder - somewhat similar in a way to Microsoft Access. More recently Filemaker has expanded to include the ability to create web apps and to integrate those with Javascript and Mac Shortcuts.

The Claris platform will apparently also include iOS support.

So in theory Claris will be a way for a non-programmer or hobbyist programmer to write low-code or no-code apps and web apps. And since Claris is owned by Apple, perhaps it might even be possible to distribute those custom apps via the Mac App store.

Granted that may involve a bit of wishful thinking… the devil will be in the details to come.

THX for this explanation!
I used Filemaker Pro for a couple of years, but it was to be way to oversized for my rather small use case, so I abandoned it some 10 years ago, and obviously missed the development.
It might be worth in this case, to have a look into the new app, as I currently have a new idea that might be possible, with this app.

I just learned, that they are asking almost 700€ for a single user license.

Answer in the video

So in theory Claris will be a way for a non-programmer or hobbyist programmer to write low-code or no-code apps and web apps.

FileMaker has always been a professional platform for consulting groups and single developers (and less importantly for hobbyists who were willing to fork over several hundred dollars to gain access to the software). This move by Apple should set a broad standard for database solutions on a Mac and allow entry for a much wider audience.

The new platform will be free for life for individual users.

Pricing for teams has not yet been announced.

Claris was the original name for the unit at Apple that produced FMP, MacWrite Pro, Claris Works, etc. The dogcow “Clarus” was a nod at the Claris name.

The new platform will be free for life for individual users.

Pricing for teams has not yet been announced.

OK, so this was looking pretty official to me
https://store.claris.com/individuals

And BTW, the Video seems to be already 4 Month old?

They even have an announcement, that as of Sept. 24th, all prices are increased by another 10%.

OK, so this was looking pretty official to me

That pricing refers to the existing offering (“Filemaker Pro” and “FIlemaker Go”).

Pricing for the new offering (“Claris Pro” and “Claris Studio”) is not yet announced - except “Free for life for single users.”

I agree the website is very confusing now; but for their webinar announcement, it is not at all evident that they are about to introduce a major reshuffling of their platform and pricing. 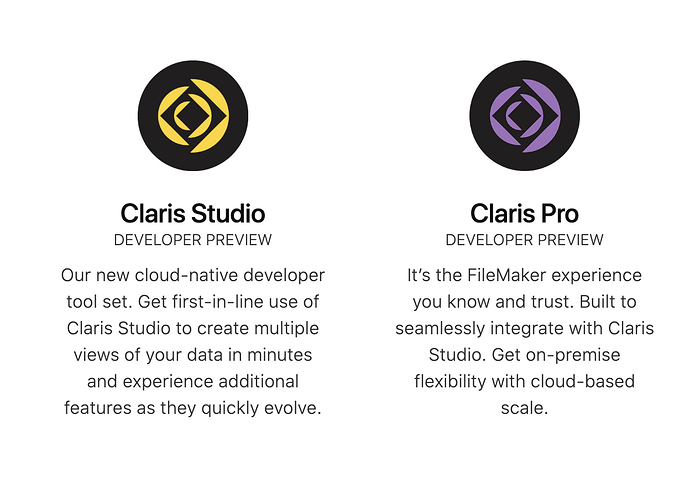 So, beside the video you linked is already aged 4 month, the release is still an upcoming event.
I understand now.

Are there any reliable informations, when this will start?
It seems a little bit odd, to still sell a software for several hundert Dollar, if it will be for free shortly?

It seems a little bit odd, to still sell a software for several hundert Dollar, if it will be for free shortly?

I agree it seems odd

Existing corporate customers likely have longstanding enterprise-level contracts and may take some time to transition to the new offering.

It seems their new freemium model is intended to notably change the makeup of their user base. We shall see. Apparently the new offering will be released in “September” - who knows if that date will stay.

I think it’s legit, c. the 7th of September. EDU site license customers have received a notice that “something” FMP related is happening then.

I’m a little hopeful; I have again given up on Zotero, Bookends, Mandalay, because while the data is easy to get into these reference managers, it’s not so easy to get it out.

My Numbers bibliographic spreadsheet is getting a little cumbersome; I suspect I have a year or so to either divide it into smaller spreadsheets, or move to something else.

I’ve just been rebuilding my bird database in Tap Forms. Maybe I’ll delay that till Sept 9th, just in case this is interesting.
Thanks.

I used to use FileMaker back when it was version 14. I do miss it but my small personal use cases made it a rather expensive subscription purchase for a single user database I made for myself.

I’m glad to see Apple bringing back a platform from the past. Back in the old days of the Mac when we had PowerPCs, HyperCard was that starting point when I had an idea. It was my first real world experiment in programming as a Rapid Application Development (RAD) platform. A lot of my workshop presentations and class demos were done in HyperCard. I dearly missed it when it was eventually deprecated because it only ran on the Apple PowerPCs.

I’m glad to see the Claris Pro platform take its place for me. I’ll be able to quickly create apps without needing to learn JavaScript or somehow try to wrangle something together with AirTable and Shortcuts.

The Claris Pro platform might be the gateway into programming for many users such as myself. I’m not a full blown programmer but I was able to mash something up in FileMaker. At this moment, I look at a block of JavaScript code and my brain turns to mush trying to decipher what it means or what it is supposed to do. FileMaker’s programming language was a bit easier for me to digest.

does/will this database include images?

Maybe I’ll delay that till Sept 9th, just in case this is interesting.

Just got a notice today that a Webinar is planned for Sept 8.

Agreed on all of that.

That said - I discovered with Filemaker that even if I were willing to pay for a subscription it was not possible to create an actual public-facing web app. Maybe there was a way to do this at an extreme Enterprise subscription level, but as best I could decipher their licensing fees, accessing apps hosted on Filemaker Server or Filemaker Go could only be done by “users” with assigned username/password and a subscription for a specified number of users.

I think from what I have read so far that the new offering will scrap that in favor of true web apps - but I am not 100% sure. While Claris Studio will definitely allow “anonymous” users to enter data (such as a signup form), it is not 100% clear that any app you write can be hosted as an anonymous web app.

So we shall see the details when announced.

Yes, why do you ask?