Sometimes when I try and share something on my iPhone 13 and now my 14 the options are fogged over, see attached.

Has anyone else seen this problem?

Before I send my old phone back, I would like to make sure that I have the new phone solidly configured.

Do you think I should set up the new iPhone 14 as a clean install. Probably take awhile for the data to move over and I am sure there would be a lot more time configuring apps.

Even migrating/upgrading from the old iPhone required setting up the apps. For example Authenticator and my garage door app. Sigh! 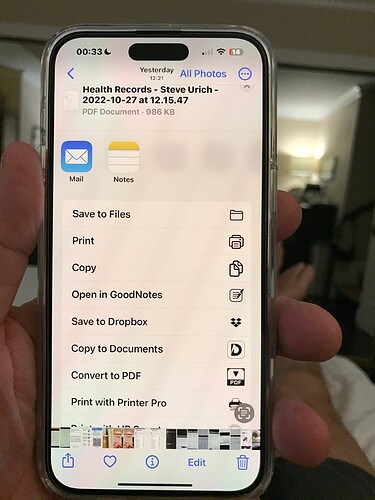 I recently helped my daughter to transfer everything from her iPhone 8 to iPhone 13 pro. It took around 30 minutes for the easy transfer (cannot remember exact name) to work and during that time both phones are tied up. Then after that the new phone can be used with basic functions but the apps took a few hours to download. After that, everything was installed like her old phone. She just had to re-apply the credit cards details for Apple pay and that’s it

I think it very much depends whether your old phone is cleaned up or contains a lot of unwanted or unused apps. If the existing phone is already in a good condition as far as data goes, then upgrade or transfer can be very handy

Do you have more Apps on your phone, that could work with a PDF File?
Are the missing Apps working (not grayed out on the home screen or the App library)?
A couple of years ago, my brother had a similar problem, that almost all apps had vanished from his share menu. But he could ad them again via the Button with the three dots at the far right end of the App-List. The obvious difference I see with your case is, that he had that button right next to the still available Apps, and not those free fields there, but maybe you check that too.

Maybe it is already the Halloween function of the new iOS…?

iPhone is running rough. I have to learn to wait for the .1 release, Oh wait I did. Ipados and IOS seem to have more serious problems than usual.

Having to set up all of the apps and get the OS tuned the way that I want it takes Days.

Now if they could just fix the ability to get Voice Control working by allowing the download of the English Modual.