CMD P to Print to PDFpenpro

Is there an easy way to extend the CMD P option to have it “print” to PDFpenpro.

Right now I do a CMD P, then click on PDF dropdown button and select PDFpenpro.

I do this about 15 times per day and it would be great if I could find a way to automatically have it open in PDFpenpro.

Hey, yes, there is. In System Preferences > Keyboard > Shortcuts > App Shortcuts, hit the plus button to create a new shortcut, set Application to All Applications, make the menu title exactly what you see there (Open with PDFpenPro) and give it a keyboard shortcut. Then you just have to hit cmd+p and your second shortcut quickly and it’ll kick over to PDFpenPro.

I use this method all the time to quickly Save PDF to DEVONthink 3. I set it to cmd+p so I hit cmd+p twice in a row quickly to send to DT from most apps.

So you create a shortcut that is set up to print ie Cmd P and then use the same key Cmd P to also select Print to DevonThink?

Can you post screenshots. I just don’t know how the OS knows what to select when you first hit Cmd P.

Thanks so much, this has been on my todo list for over a year. I don’t know how but it works. I really appreciate it, I wish there was a way to buy you a cup of coffee,. 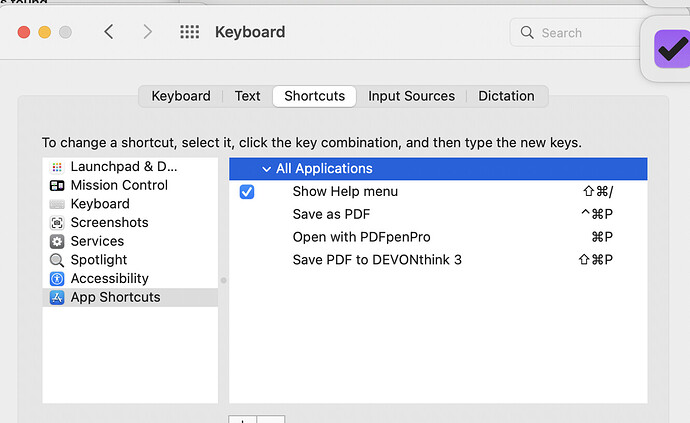