Does anyone have one of these combined chargers that can charge an iPhone, Apple Watch, and AirPods Pro all on the same charger?

It appears that almost all of them require you to use your own Apple Watch charger, which is fine, if that’s what it takes.

The difficulty in selecting one of these is that there seem to be a myriad of them, mostly by companies but I do not recognize.

My biggest concern is finding one that works decently well and reliably. Any recommendations appreciated.

It’s not an all-3 charger, but I just bought a Belkin combined iPhone/Watch charger and it came with its own Watch puck built-in. It’s surprisingly difficult to find combined chargers that come like that. (I’m not really answering your question, more just commiserating with you)’

Edited to add: It looks like Mophie makes one that’s sold in the Apple Store: https://www.apple.com/ca/shop/product/HNG02ZM/A/mophie-3-in-1-wireless-charging-pad (Canadian site, hopefully the link will take you to the appropriate site for you)

I have the SliceCharge 2 3in1. It’s on the arm of the sofa (the arms are more like shelves in many ways) and works well for me.

I’ve been using Nomad’s since the beginning of April with no issues other than if a magazine or cord gets under the watch band, it can separate the watch from the charger. Hasn’t been an issue since I decluttered my nightstand, though.

I can’t say if it’s the right one, but it’s not something I have to think about anymore, so it’s not bad.

They just refreshed it to add USB outputs and faster charging (and bump the price a bit.) 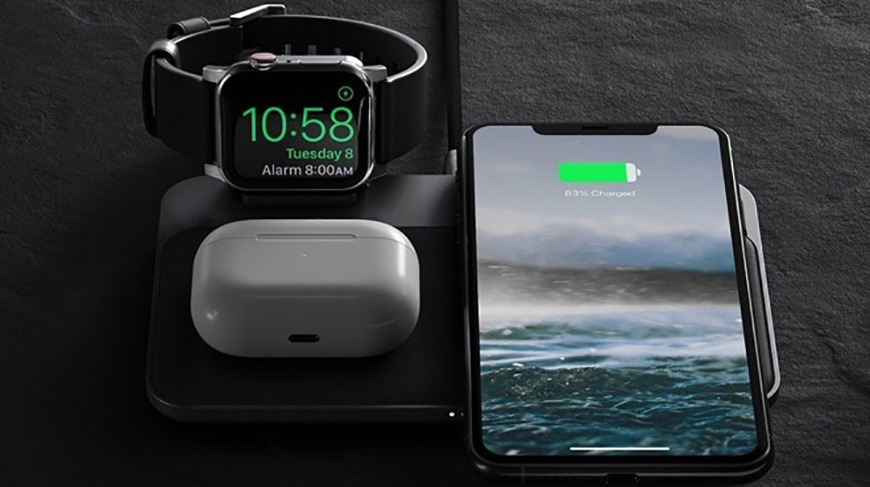 Nomad has launched a more powerful Base Station Apple Watch Edition with additional outputs and faster charging. And to celebrate the release, shoppers can save 50% on any Nomad Kevlar-reinforced cable with the purchase of a Base Station during its...

I have this one https://nomadgoods.com/collections/power-wireless-charging/products/base-station-apple-watch and really like it.

This was just published:

Logitech has launched a new three three-in-one wireless charging dock for the iPhone, AirPods and Apple Watch. Two other products ...