I’m thinking about these discount software companies, and the impact they might have on developers.

I realize that developers voluntarily participate in the sales, licensing, bundling.

What is the developers’ motivation?

Surely any proceeds from, say, Setapp, must be a monthly trickle of income?

I often see interesting software in the bundles and subscriptions, then go pay full price so the developer can buy food. Is this why they participate?

As always, seeking to understand.

I think there is a difference between Setapp as an ongoing model and other bundles.

Regarding Setapp:
Brett Terpstra wrote about his thoughts why he had chosen to join Setapp with Marked back in 2016, when Setapp was about to launch - Setapp: Sustainable recurring revenue for Mac developers - BrettTerpstra.com

His motives were written as the headline of his post: “sustainable recurring revenue for Mac developers”.

It’s going to be an invite-only app store, with carefully selected apps representing only the best in their niche. Developers get paid based on a formula that uses the price of the app and the total users for the month to calculate a monthly payout.

He then explained Setapps advantages over the Mac App Store:

Apple has featured Marked a couple of times, and it’s rankings have remained reasonable over time. However, it’s never likely to turn up in a search that doesn’t include “Markdown,” so discoverability for new customers hasn’t been optimal. My apps on Setapp, by way of its hand-picked selection of paid -only apps, will innately have better discoverability, even if search were to turn out to be less than satisfactory.

As of today, he is still on Setapp with his apps.

As a former Setapp customer, I totally get what he is talking about. And with recent price increases, Setapp is not that bargain of the past (depending on your use cases). When I cancelled my Setapp subscription, I bought the apps I did not want to live without from the developers. I really do believe that Setapp is sustainable and interesting for developers.

You get licenses for prices that are crazy at times. Dirt cheap you could say. Why? Well… The reasons are similar: discoverability, get your potential customers’ attention. And when they talk to their friends and colleagues as they keep using their apps, the developers might sell many more licenses to them in the months and years to come.

Sometimes, those licenses are being sold in a bundle in a time window shortly before a new version is released, sometimes it is a bargain for years to come.

Throw an app at somebody hoping that it will stick. That seems to work quite often. It definitely has worked with me: there are several apps I bought via bundle - and I have bought several releases from the developer over the years after that.

It is a pity, but the failure of the Mac App Store shows that sometimes even Apple does not get it right: the good old bundles still are out there. And they will not go anywhere. And MacPaw has shown with Setapp that you can learn from Apple and that you can do an App Store even better than Apple as long as you have good ideas.

It’s not at a loss – producing a new copy of the software costs zero.

The key here is marketing --most of the customers purchasing via these bundles would not pay the full price for the software or are not even aware of it. For a solo developer or a small shop marketing is a pretty significant effort in terms of time. If you manage to sell, say 100 licenses per month at 30$, why would you not sell 1000 at $4 via a discount software bundle?

…producing a new copy of the software costs zero.

Indies have costs for websites, bandwidth, payment processors, taxes, etc etc that must be amortized across all their sales. I know where you are coming from when you make this claim, but their costs are never zero.

Indies have costs for websites, bandwidth, payment processors, taxes, etc etc that must be amortized across all their sales. I know where you are coming from when you make this claim, but their costs are never zero.

Yes, the correct term is the “marginal cost” and the zero cost is not zero, of course, but it’s negligible when compared to, say, developer cost per hour.

That’s the darker side and the reason why you never see Cultured Code or Omni in these bundles, and these offers or bundles all consist on some popular items (Forklift for 4.5$ feels unbelievable!) with some more obscure utilities (never heard of Aerate or File Cabinet Pro, for example).

And also why these bundles are like “pop-up stores”. You are never really sure when they are going to come live, otherwise people would know where to look for a discounted price (yes, I would pay 50$ for Forklift, but I’m not an idiot either

I guess indie developers must be careful when opting for these types of distribution channels otherwise thay may become captives: intermediation can be your friend but also your foe (tell that to the hotel chains versus TripAdvisor and the OTAs)

The rock bottom prices are what make me question their legitimacy but Michael Tsai confirms that EagleFiler is participating.

I can confirm that the license received is valid and I could register my copy of EagleFiler today.

It’s also like sitting next to someone at a concert who paid $75 for a seat, whereas you had to pay $125 for resale tickets.
Same for airline tickets.

It’s all about yield management, which has become more and more sophisticated and pervasive.

This article by Joel Spolsky explains it very well.

“The more you learn about pricing, the less you seem to know.”

If you’re a developer selling an app, your primary role is still sales and marketing. It’s not a skillset one just stumbles upon and it takes a lot of time away from what you’re good at.

What do we love about our favorite apps, quality code and responsive support. It’s hard to do that if you’re spending cycles implementing a social media strategy and sussing out the opaque mess that is Google’s search algorithm so people can find and buy your app.

That doesn’t even begin to address the joys of dealing with e-commerce, customers, and their often entitled view of the world. And I would assume SetApp takes on the risk of a customer signing up and not keeping the membership long enough to break even. And as pvntulis point out, pricing is a dark art in and of itself.

Plenty of motivation to let someone else handle that part of the business for you.

I think it’s pretty evident that a majority of small Independent Developers struggle with the business side. Pricing is difficult for most companies because it’s often inextricably linked to good marketing. Many developers struggle at marketing thus the corralating struggles with pricing will rear their heads.

A recent example is Pathfinder the problem with their pricing strategy is that they’re doing subscription pricing without any visible backend costs (AWS, Azure, etc). Without these costs the developer is asking to be compensated strictly on their coding and i’ve used Pathfinder for years and have never really considered it a stable application or the best of breed in its class.

I just bough another license of Blocs for my work Macbook from MacHeist. I think after a developer has proven themselves the path to obtaining more users is a bit easier and the price cutting doesn’t have to be as extensive

A recent example is Pathfinder the problem with their pricing strategy is that they’re doing subscription pricing without any visible backend costs (AWS, Azure, etc).

Wait…is it actually a subscription? I have a PathFinder license, and I’m still definitely using it after that first year without paying extra. Updates now explicitly warn me that they’re paid upgrades, so I can act accordingly.

It’s not at a loss – producing a new copy of the software costs zero.

But for something like SetApp, there are multiple apps where it does seem that some devs could be taking a hit.

Take a subscription app like Ulysses. Because devs on SetApp don’t get paid unless their apps are used, and they get paid based on the usage of their app.

So take your SetApp monthly subscription price. Give that something like a 30% haircut for MacPaw’s cut. And now split up what’s left.

Is there $6 a month in there for Ulysses?

Keep in mind that people actively pitch SetApp using lines like “if you use Ulysses, that’s half of the value right there” - which is a pitch that potentially draws existing customers away from Ulysses.

I’d suggest that at least some devs lose existing licenses to SetApp at a net loss. Maybe they get some casual users out of the deal and that makes up for it - but if a user would pay you $6/month, and SetApp uses that fact to pitch users on a plan that causes them to not pay you $6/month, that’s a loss by definition…isn’t it?

On the other hand, how many folks who think, “$6 a month for something I’ll only use occasionally, no thanks” change to, “I can use that $6 a month app and all these others for $14? I’m in”, in which case the Ulysses folks get some revenue from users that they otherwise wouldn’t?

Right - they get revenue from people who wouldn’t otherwise pay the $6/month.

But they lose at least some from existing Ulysses users that switch to SetApp. And they have at least some extra development costs to implement the SetApp license model. 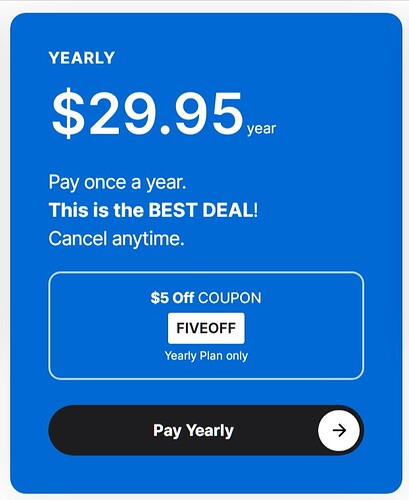 They switched entirely to subscription, apparently. And their reasons for doing so seem pretty anemic, with this one being a notable example:

The credit card processing company we use for example only handles subscriptions and doesn’t handle one time purchases with license keys. Given that limitation and after searching for months for the best solution andweighing all the pros and cons, we decided it’s best for everyone if we switched to subscriptions.

I mean…they’ve been selling one-time license keys and upgrades via credit card for quite awhile. I find it fascinating that suddenly it’s completely impossible.

I’m not a Setapp user. But as a developer maintaining three macOS apps, I hope one day I can get one of them into Setapp.

The biggest problem after shipping your app, is how to make more people aware of it. And Setapp kinda solves this problem. You app is exposed to a lot of potential users. This comes with a least three long-term benefits.