DEVONthink cloudkit sync not reliable - what is the alternative?

I have DT3 running on my M1 Mac Mini (always on). I rely on cloudkit sync to keep the DT3 version on my MBP. However, it has been very frustrating the I constantly get CKErrorDomain 15 errors for the last 6 months. 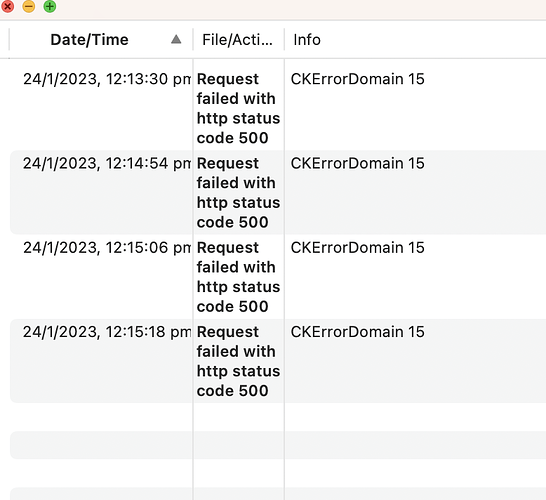 I searched the support forum, even Bluefrog recommends finding alternatives.

with all the current issues with Dropbox, I do not want to pay for the storage there.

So my question to the wise men here - can I use Synology NAS , Google Drive, One Drive, NextClould instead of Cloudkit ?

You can use a Synology or NextCloud as webdav servers to sync DT. I don’t know if Google Drive or OneDrive support webdav (doubtful.)

If you don’t need sync to stay up to date while away from home, and you have a desktop computer you can leave on, Bonjour sync on your local network actually works pretty well, too.

with all the current issues with Dropbox, I do not want to pay for the storage there

Hello @fuzzygel,
What current issues are there with Dropbox? Is this specific to DEVONthink, or are they experiencing more general sync issues? I still have a free Dropbox account that I use occasionally, but I do not rely on it as a way to sync files.

Dropbox has been extremely reliable for my DT usage.

This is the answer. WebDAV seems to be most stable. If not Bonjour seems to be next best but need to be local.

Dropbox has been extremely reliable for my DT usage.

At the same time, I’ve actually moved away from syncing all my databases between two Macs through Dropbox, which has caused me some trouble over the years (always expertly and courteously supported by the DT team, I hasten to add – even though these issues might have originated from the cloud storage provider rather than DT). When DB failed on me for one, mission critical, database, I temporarily moved it across to CloudMe which worked for a long time – until it didn’t after a long and unexplained outage last year. So I cancelled my service with them.

Thanks to a new MBP bought by my employer, which I lug home most days, that machine is now my single ‘source of truth’ for DT. I do sync some databases for use with DTTG (via Dropbox), and so far it has been rock-solid. I can use Bonjour at home, but due to security protocols at work for some reason Bonjour doesn’t work at the office.

In the end, syncing through cloud storage introduce a potential weaknesses into the system. As a long-term (often sleeper) member of the DT forums and having read the complaints there, I think there is no single service that works all of the time. More moving parts = more chance for things to go wrong. And it tends to break at the least convenient times!

I found that overall I overestimated my need to sync (Bluefrog’s emphasis!), but as they say, your mileage will vary.

I also use Dropbox and I have no issues with sync.

I had problems when using iCloud in the past with the corruption of files (zero bytes). Since switching to Dropbox, that problem has never resurfaced and it has been super reliable with no errors.

For most of last year, I had similar frustrations with DT syncing to CloudKit. Many times I completely wiped the sync store. Paying for Dropbox would have added another subscription, which I wasn’t eager to do.

So I waved goodbye to DT and have found a slice of nirvana using Eagle Filer and Koofr. Koofr hasn’t been mentioned yet. It’s a secure cloud storage that has a number of features I want: secure vaults, emailing files to folders, a web interface, iOS app and WebDAV. I stumbled upon it through a StackSocial deal, that is still available, the end of last year. For a reasonable one-time price you can snap up a 1TB of storage.

I’ve been happily migrating to Koofr over the past few months. The developers are active and helpful on Reddit. It’s worth taking a look.

and remember, you don’t actually have to have Dropbox installed on your Mac to use dropbox sync. So no need to pay for that pesky subscription.

Just another data point, but personally I haven’t had any issues at all syncing DEVONthink with iCloud’s CloudKit. I might be the unicorn, but so far I haven’t seen any reason to move off of it myself. Might just be a matter of time I suppose till the issues lots of other folks have seen bite me as well, but so far so good.

That being said, if I was not going to use iCloud I’d probably use local Bonjour sync, or stand up my own Webdav server. Or maybe setup Dropbox again? Shoot, I don’t know what I’d do, but I wouldn’t like it.

How about placing your DB’s on a small SSD? I have a 1TB Crucial X8 that fits in the palm of my hand. Light weight and portable. I no longer use an iPad so DTTG is no longer necessary.

I’m increasingly moving away from cloud and utilising the amazing development of small SSDs. Cheaper as well.

I’m increasingly moving away from cloud and utilising the amazing development of small SSDs.

So you carry your data around in your pocket? On a keyring with a number of small SSDs? I’m not sure I’m correctly visualising your process. Thanks.

On a keyring with a number of small SSDs?

That made me laugh! No, just when I’m out and on the laptop my data is on an SSD. I actually only need one as 1TB is currently sufficient. It’s encrypted and takes minimal space. I can access my data without all the ckoudkit shenanigans.

If I have a home office desktop and work desktop, the data travels on the SSD. The SSD is part of a backup regimen, so no data loss.

Thanks to a new MBP bought by my employer, which I lug home most days, that machine is now my single ‘source of truth’ for DT. …

In the end, syncing through cloud storage introduce a potential weaknesses into the system. As a long-term (often sleeper) member of the DT forums and having read the complaints there, I think there is no single service that works all of the time. More moving parts = more chance for things to go wrong. And it tends to break at the least convenient times!

This is my work flow too. I just changed from a desktop, laptop and iPad to a single MacBook Pro (M2). Rather than stress about syncing everything and knowing that every service is fallible, it just makes more sense to me to have one canonical version of my data on one machine. I functioned this way years ago when I had three offices (and three jobs). It was so much easier having only one machine to manage and knowing that I had the data I needed with me.

I’ve set up identical workstations at my two offices, and can take the laptop with me to meetings and on the road. I have an iPad to use in emergency or for vacation trips. And I have a Time Machine backup disk in each office (and one at home). If the computer breaks, I can limp along on the iPad until I can pop over the Apple Store and either get the laptop repaired or replaced.

It’s not the cheapest way to go, but it’s the least worrisome.

I actually like the Dropbox and CloudKit sync, too, but I sync with another family member which rules out sole reliance on CloudKit, and using Dropbox sync with them is also awkward, even though you can temporarily sign in with one Dropbox account on a device to get the sync credentials saved.

Plus, you’re supposedly limited to number of active devices with non-paid Dropbox, although I’m not sure if it actively pauses sync when you have too many devices using credentials.

actually like the Dropbox and CloudKit sync, too, but I sync with another family member

If the other family member is on the sam local network, have you tried Bonjour sync. Fast and reliable. Probably only have to adjust the macOS permissions for the database folders to allow the other person. I say probably as I have not tried, but i use Bonjour for all four of my DEVONthink devices on macOS and iOS. Fast,quick, and reliable.

I have! I think Bonjour works pretty well, at least on my network. I didn’t need to adjust file permissions because the sync data is shared through Bonjour. I think you’d only need to do that if using the local sync store method over the network.

I was speculating about that as two user id’s involved. Pure but informed/experienced speculation but a thought in case did not work for second userID.

Best to try I guess.

Oh, no worries. It’s the Bonjour password for the host computer that protects the data. When I set it up, I did have to restart the host to get the incoming Bonjour connections to work—unsure why.