A few days ago @Macsparky gave me early access to his new DEVONthink Field Guide which is now available for everyone.

I had intended to try to watch the whole thing before it came out, but there was this little 8-hour podcast-a-thon on Friday which I watched, and that made adding another ~8.5 hours of video a bit of a challenge to fit in. I’m about halfway through, plus I’ve taken a look at a few of the later chapters just to get a sense of what is coming.

Since this is the Internet, I should make clear that there was no ‘quid pro quo’ of “I’ll give you early access to this if you say nice things about it.” David has been doing these Field Guides for a long time, and they have a proven track record. Quite frankly, I doubt anything I have to say will ‘move the needle’ in any significant way.

Here’s what I will say: I have owned DEVONthink for a decade (my entry in 1Password is dated 30 Jan 2011). In that time, I have wanted to use it. I have wished that I had used it. I have even started to use it… at least a dozen times. But it’s never ‘stuck’ for me.

It’s a powerful application, which means it is also a complicated application. I have never really felt like I understood the app well enough to use it to its full potential, and so I’ve gotten overwhelmed to the point of either not trying at all, or trying it for a short time and then giving up.

Being able to watch someone set up DEVONthink, step by step, took away the ‘overwhelm’ factor for me. Frankly, it’s the same reason why it took To Obsidian and Beyond to get me to look at using Obsidian.

David leads you through the process of learning DEVONthink in manageable chunks. When something comes up that he’s going to talk about later, he tells you so you don’t have to think about it now. He breaks it down into easy-to-digest pieces, and you get to watch him do it. He explains the pros and cons of different ways of doing things.

Even some of the ‘simple’ stuff in DEVONthink left me thinking, “Oh, it can do that?” and I immediately realized that I had been looking for various apps to do these various things, never really giving DEVONthink much thought because the idea of getting started had too much mental startup cost. Should I have know this already? Maybe. But I didn’t.

When we’re ready to work with actual information, he has a real set of documents and information to use to explain how DEVONthink works when you have real data in it. (Hat tip to one Stephen Hackett for providing 2 GB of Apple-related data to use as the example set.)

One of my favorite features of the Field Guide is interviews with people who use DEVONthink, including Stephen Hackett, Gabe Weatherhead, and Kourosh Dini (who wrote the Taking Smart Notes with DEVONthink course). Getting to hear people talk in a cogent way about how they really use DEVONthink, is almost worth the price of admission by itself. Each of the conversations is short (about 10-20 minutes) but long enough to give you insight into how real people really use DEVONthink.

The truth is that after 10 years of having DEVONthink, I had zero DEVONthink databases and nothing but aspirations of using the app “someday”. All of my previous attempts felt like I didn’t really know what I was doing, but I was trying it anyway.

Even before finishing David’s course, I have two (admittedly small) databases started (one for sermon prep, and one for computer-y stuff), and I feel like there’s much more chance that I’ll be using the app in a month/6 months/year than if I had tried it on my own because I understand it more than I ever have.

I expect David will have no trouble at all finding more eloquent and more noteworthy people to sing the praises of this course. He spent a long time making it, and it shows. My ‘pitch’ is fairly plain and simple:

If you’ve wanted to use DEVONthink but have not known where to start, or tried and gave up, or if you know the basics but want to go deeper, I think you can’t go wrong with the DEVONthink Field Guide. 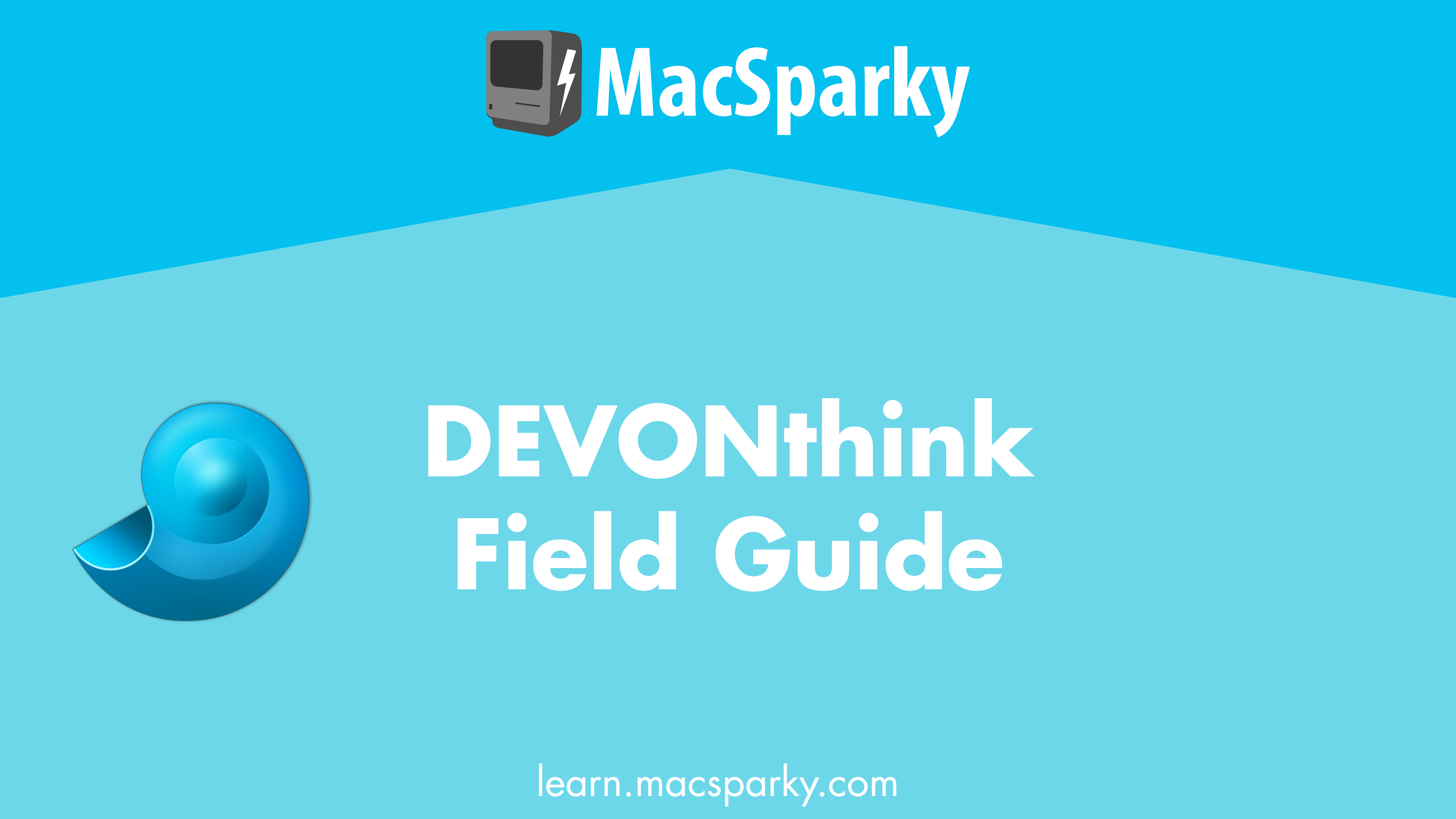 Learn to get the most from the powerful A.I. driven database application for Mac, iPhone, and iPad.

Thanks for the review, I bought it as soon as I head on MPU that it was available. I had the previous version of DevonThink and did not do anything with it, when I heard that David was creating this field guide I bought the new version, and then waited…and waited…and waited for the field guide

I have already watched a few videos and hope to get a better grasp over the coming weeks.

Thank you for your review @tjluoma – the DEVONthink Field Guide is now part of my Field Guide library.

I took a break from DevonThink this year in favor of Obsidian, and now I’m taking a break from Obsidian. I’m interested in the field guide.

Not quite interested enough to devote 8.5 hours to it, but I’d love to learn more about what DevonThink could be doing for me.

I hope @MacSparky and @ismh devote an MPU episode to DevonThink soon.

Chipped in last night and started watching this morning…Great to skip through lessons and already learned a few things even as an experienced user. All of the FieldGuides find regular use … a great way to dive in and get the hang of it…

Is there a special discount you provide to special people

I hope @MacSparky and @ismh devote an MPU episode to DevonThink soon.

David said that the whole episode of MPU next week is on DevonThink.

Is there a special discount you provide to special people

Yes! If you use this special link https://learn.macsparky.com/p/dt you can get the course for $44 for a limited time.

Narrator: That’s just the regular link to the course. David is offering that special price to everyone, for a limited time. TJ has no special powers to enable discounts. Just humor him.

I’m sure that will be music to David’s ears.

I’m sure that will be music to David’s ears.

in the Power Users chapter, at one point he said “Take what you can…” and I involuntarily said “give nothing back”… I thought he was going to work a Pirates of the Caribbean reference in there.

Not only am I expensing this, I am using all personal development time this month on this course.

Edit: Got it approved

Gang. Thanks for all of the support. It sounds silly, but I really pour myself into making these things and I love hearing that folks are finding value in them.

It sounds silly, but I really pour myself into making these things and I love hearing that folks are finding value in them.

@MacSparky not silly at all. Your care and passion for these projects shine through in every field guide. I’m already a ⅓ through the DT guide.

I’m still struggling with why I’d want to index or import my files into DT. DT offers a lot of power but getting to files in DT on iOS is harder than doing so through the Finder. And, I don’t want to have stuff in DT that is also not in Finder/iCloud.

I’m hoping that the field guide will help me get a handle on this and/or your upcoming podcast will!

I WANT to use DT because of its power but I can’t quite figure out how to leverage that power (e.g., the Sorter) while not having either duplicates or have some files in one place and others in another place.

Good luck with this. You can never too many Devonthink stuff IMHO.

I remember buying years ago the Take Control book on Devonthink which really helped me get into the app. Devonthink is remarkably complex and deep. I have been a user for over 10 years and am still learning.

I have been a user for over 10 years and am still learning.

I have almost 30,000 working hours in DEVONthink and I still learn things about it all the time.

David said that the whole episode of MPU next week is on DevonThink.

Stephen just said (on Connected) that this week’s MPU episode is about iOS/iPadOS 15… so I guess DevonThink is going to be a little later.

@tjluoma - I kept pinching myself when I read your post… wondering when I wrote it. I don’t remember writing it, but I’ve lived every single moment of it!

Thanks for sharing. Just subscribed…

Thank you for review and @MacSparky for creating. I came to DevonThink thanks to all of you here. I love it. I have the TakeNotes book which is good. And I watched Elaine Giles’ video series, which I enjoyed. Just purchased David’s course, which I look forward to helping me raise my DT game.