Do you have Textexpander & Keyboard Maestro installed together?

I’ve been using Textexpander for about a month now and I absolutely love it! I’ve been watching tutorials on it and attending webinars and can’t believe that I’ve been so long without it!

It’s got me interested in Keyboard Maestro, and what that can offer. Particularly in conjunction with Textexpander.

I’m just not sure if they should be used together, CAN be used together or if they will just conflict
I’m getting the sense that they offer different functionality albeit achieve similar goals.
Can someone give me their thoughts on this, please?

I’ve just installed Keyboard Maestro and I’m about to give it a proper go. I’ve installed it before but on the theme of this post, I just kept uninstalling it.

I am a light user of typinator and use keyboard maestro a lot. There should be no clash at all - keyboard maestro is a powerful, but complex tool. Its value lies in the engine, which runs all the time and provides triggers on different system events. The actions are written in blocks and are from their structure very similar to an execution flow of a programming language.

While it is true, that you can do all text triggers you do with text expander in keyboard maestro, it far from being a pleasure. For some snippets you would have to write regular expressions, others would require a very complex execution logic. Organising them would cause some pain, too.

Peter (the person behind keyboard maestro) once said, that while the engine of KM should be capable of handling several hundreds of text macros, he does not see it a full-scale replacement for snippet tools. If you use only 10-20 snippets it can be a capable alternative to KM, since buying and running an additional program for such a small number of snippets may be an overkill.

I think they have different areas of expertise.
Keyboard Maestro is good at shortcuts and automation, Textexpander is good at text operations.
So while you can use a butter knife as a screwdriver, in most cases you wouldn’t want to.

The iOS app is important to me, I didn’t even give that a thought!

I use KM and Textexpander together. I have for years. They work fine.

I use both. As of yet I’m not doing either of them justice.

…but I’m getting there.

I use TextExpander for some regular stuff, abbreviations for commonly used phrases etc, and as a sort of repository for some longer texts I frequently find myself typing and some formulas/queries I find myself often using some version of in one application or another.

With Keyboard Maestro I’m begging to build up some decent macros, and now that I’ve gotten started I’m getting better and better at realising potential macros to implement. Typically adding a new one every couple of days currently. This is more of the “get right Apps up and running”, “run complicated regex and file handling stuff”, “mess around with the clipboard content to reduce the steps needed for some tasks”, and other fun things.

I could probably have used Keyboard Maestro for all my TextExpander stuff, but most certainly not the other way around. If I ever get around to actually using TextExpander on iOS in Drafts or something I guess that statement would no longer be true.

I really haven’t done anything to speak about in KM but I’ve been having a look around this evening and excited to get started!

Incadentally if anyone as any good KM resources please let me know.

Incadentally if anyone as any good KM resources please let me know.

The Keyboard Maestro site has a lot of resources – check out in particular the KM Wiki, the KM manual, and, especially, the KM forum. The forum is frequented by amazing users – and Peter Lewis, the KM developer – who very generously provide advice and custom macros to help newbies and anyone else succeed with the app.

A great feature of KM is the context-specific Help command, which is available in the “gear” icon on each action while you are creating and editing macros. Click “help” and you’re taken to a page in the KM wiki specific to that action including forum links expanding on examples. A lot of this documentation is user-contributed (by @JMichaelTX and others). 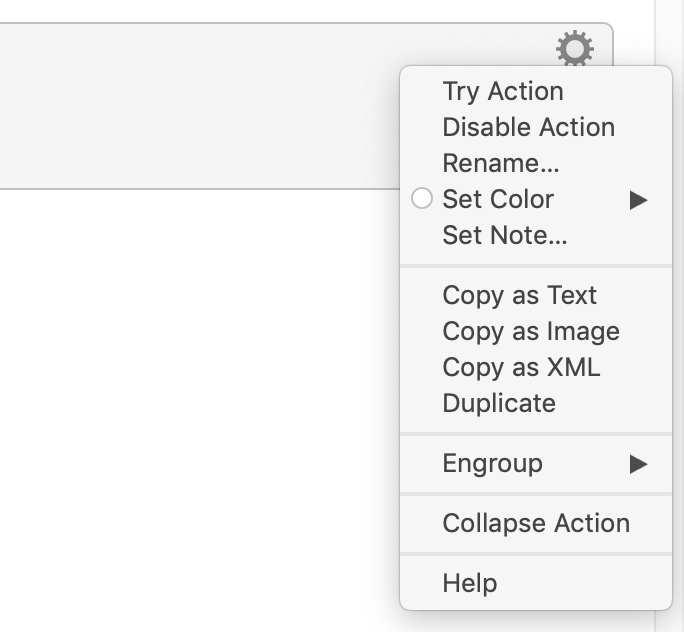 I use both with no problems:

I also use Alfred for when I want to drive automation from the command line. I have Hazel but have no active rules right now. I also have Better Touch Tool - with just a few gestures.

Horses for courses, no bad interactions between them.

When I tested it, there were no problems using both TE and KM side-by-side on a Mac though.

I like using keyboard maestro for triggering text expansion with the same text trigger. KM provides a conflict menu if you have the same trigger for a Marco. This works out great for email signatures. I only have to remember one text trigger and then I get a choice for which signature I want.

Keyboard Maestro and TextExpander coexist peacefully on all of my Macs. For me, the difference between the two (at least when it comes to text expansion) is that TextExpander is designed not just to expand text but also to efficiently manage the creation and storage of those snippets. That’s its sole purpose. I’m sure I could devise a system to do it just as efficiently in Keyboard Maestro, but since Smile has already done the work to create a tool that does that, I don’t need to.

I could write a novel in BBEdit or Pages or Word if I wanted to, and I probably would have if Scrivener had never come along. But now that I have a novel-specific tool, I’m happy not to bother trying to bend those other tools to that purpose.

Right, but you can’t use KM on iOS, where TE also works.

Right, but you can’t use KM on iOS, where TE also works.

I think a remote control app isn’t as useful as having that automation on iOS itself. When I use the phone of iPad, my MacBook is closed.