Do you quit your Mac apps when not in use?

I guess it’s an old habit, but I am used to quitting apps on a regular basis. Now that I have a MacBook Pro M1, I set up keyboard maestro so that with one key - I can quit all my apps and windows - and with another key I can start all my usual apps and windows. And addition it will re-position everything exactly where I want it.

Because the M1 is so fast I enjoy quitting and starting apps several times a day probably mostly for fun watching everything get set up at lightning speed.

Also there was an article from toms hardware website a while ago. He mentioned that with less ram - then the memory could fill up easily with many Apps and web tabs open etc. When that happened the Mac would have to write to the hard drive with Page In’s and then page out functions. Add at the time he mentioned that if you have a small hard drive - then it would be writing to the SSD hard drive very often which is not good for SSD hard drives and may become a concern.

Tom's Hardware helps you buy the best hardware and build the best PC to play, create and work..

Until a year ago a 2010 MacBook Air was my “extra” or casual work-about-the-house laptop. Near the end of its useful life it served as my gauge for ill-behaved apps or websites that consumed excess resources while running in a web browser. When I used certain apps or landed on certain websites the MacBook’s fans spooled up and made my life unpleasant from a “guy-who-loves-quiet” point of view.

The offending websites were those that constantly auto-refreshed, streamed advertising video, constantly accessed servers for advertising or data harvesting purposes, and did other things I don’t understand. The egregious websites included news websites, especially those hosted by local television stations. Even today I avoid those and similar types of websites. And that taught me to close Safari (and other web browsers) when not in use. I never leave a web browser running overnight.

It’s not only computer resources (battery, cpu resources) that should be considered. Most of us have data caps for cellular plans and home landline internet usage. Even if an app or web browser does not overly tax the computer’s cpu or graphics processor, it could consume excess data bandwidth and should therefore be closed or not used.

I don’t use social media, but I understand that social media apps can hog resources or internet bandwidth. Facebook’s app is said to be notorious for this, but I have no personal experience with Facebook’s apps or websites. And never will.

Today we have a true first-world problem. The M1 Macs are so fast and power-efficient that they can no longer be used as excess power-consumption gauges

So my rules are: Close web browsers when not in use, avoid or limit egregious apps and websites such as news, social media and advertising-heavy websites. And certainly close these apps/websites when not in use!

You raise a good point here. I need to pay more attention to open tabs. I think there are apps or extensions that can automate closing down background tabs.

If it doesn’t have an open window, then I quit it. That’s my policy.

I only leave my most commonly used apps open. Mainly the ones for work, and safari.

I close all apps that I am not actively using. This is based on habit; nothing else. I use the few seconds waiting for apps to load to clear my mind. I haven’t noticed any detrimental effects of doing so. Good to know that leaving some apps open would not be harmful in most instances.

This thread is very interesting. I always close apps after I am done using them on the Mac. I never thought about the memory impact. I just CMD-Q to clean up the desktop and not see the little dot in the dock under the app. There are some background apps that stay running, but the ones with which I interact are closed. There have been times that I closed webpages I needed open, but it became an automatic response when I think I am done with a screen. My wife on the other hand, keeps her apps open for days. Looks like I need to stop pestering her to close them completely.

… My wife on the other hand, keeps her apps open for days. Looks like I need to stop pestering her to close them completely.

Forget closing apps. You would be better advised to avoid pestering your wife at all, for any reason.

You would think I would learn after many years…I am also not allowed to look at how many files she has on her desktop.

…I am also not allowed to look at how many files she has on her desktop.

I don’t close my apps, but I use KM to hide all the windows after either system wake or x minutes of idle time.

Here’s a link talking about swap issues and SSD’s 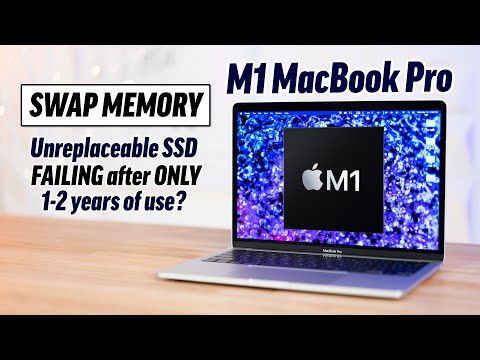 That was an incredibly informative and well produced video.

By habit I tend to close apps. However I have had no problems with leaving several open for long periods of time together.

Here’s a link talking about swap issues and SSD’s

I wonder if they found whether there was a software bug or something else. I think this video was at least a year ago. Curious if there have been any newer reports.

It was a reporting error between old tools and the M1. More on the story at Apple Insider. Much ado about nothing.

The rest of the comments now make sense…

I usually close them. Just a habit. I don’t think too much about it. There is only one app that gives me trouble so I just reboot occasionally because of it.