Do you quit your Mac apps when not in use?

I’m trying to use my Mac more since updating to the M1 Mini. An experiment to learn, perhaps to see how I might use the Mac more with my iPad. After five years with the iPad I’m still finding the Mac a bit awkward.

One question I have is in regards to memory management. On the iPad I don’t close apps or manage them in any way. On the Mac I’m used to quitting and reopening apps - an old habit from the before days. Is that still necessary? I noticed that there is a setting to not show app open indicators in the dock so I’ve turned that on. Kinda helps me not to think about or worry about app status. Guessing that I’ll max out my 8GB of memory and permanently be using swap. But, it seems like that’s faster. I find if I quit apps the reload time is much longer than I would expect with an M1.

Do you all micromanage your apps or just let them all run in the background all the time?

It depends on the app. Some apps are made to run in the background all the time. Some apps I just want to have running all the time. Some apps are massive hogs and I quit them as soon as I’m done (Hello Microsoft Teams!). Right now, beginning of the day, it looks like I’ve got seven apps running. Safari, Notes, Messages, BBEdit, Terminal, Slack, and OmniFocus. Those will probably all stay running for as long as my Mac is running. If I happen to ⌘-Tab and realize I’ve got a whole bunch of apps open, I’ll probably ⌘-Q some of them I know I’m not using.

On one hand, I think the iOS method of managing if an app is running or not would be great on the Mac, but they tried it before and it didn’t really take. Some apps will quit automatically when not in use, like Preview, but some won’t. Honestly its a bit of a mess. But, like I said before, I keep certain apps running all the time, so I wouldn’t want say OmniFocus to be closed on me when I wasn’t looking.

I am using a MacBook Pro, most of my apps are running 24/7. There is no point of closing them and re-opening them everyday. The only app that I make sure to quit between uses is Zoom, because I just don’t want it to turn on while not in use. Otherwise here are some apps I use all the time:

I am working for a startup where I work at any time of the day, and life is too short to quit and relaunch apps.

I have an 8gb ram M1 MBA and normally leave Drafts, Safari, and Google Chrome (my Google Workspace client) as well as processes like Arq, Hazel, and Chronosync scheduler running 24x7. No problems so far.

I tend toward a minimalist approach. I don’t close apps frequently unless I’ve used one and don’t anticipate using it again for at least a day, in which case I’ll close it even though I have plenty of resources.

These are the apps that preload and run continuously,

I leave apps open all the time, except apps that listen to me or watch me – mic or camera. They get shut off immediately after I use them.

Currently 30 active apps in my dock (plus a bunch more that would be in my menu bar if they weren’t being hidden by Bartender).

It depends. I wouldn’t close apps if I had a Mac Mini. But I want to save battery life as much as possible, so I disable all demanding apps before going to bed.

Since Mac OS X Lion I haven’t closed apps but just keep them running (unless they turn themselves off). There are currently 15 apps running and I’ve got 18 of 40 GB RAM free.

I just use Quitter and not bother with monitoring active apps. Most apps are in Quitter (with 2 hour timeout) except the ones that need to be open most of the time, like Browser, slack, terminal.

Unless I think I notice a problem with a specific app (which sometimes happens), or Apple tells me I’m out of memory (which hasn’t happened yet on my 16GB M1 MacBook Air), I let all my programs run and let Apple manage the memory for me. P.S. I stopped believing, and then stopped using, Clean My Mac when it would would tell me I was out of memory!

I shut down apps when I am doing lecture presentations or Zoom meetings. The former is to avoid the embarrassing “Oops … did not mean for you to see that spreadsheet page”. Otherwise, in both cases, I do so to reduce the load on my laptop that otherwise unnecessarily heats it up while doing video-intensive work.

ps … When I have multiple apps running, I am less concerned with how many are running than I am with finding my way around the commensurate slew of apps that are running. I shut down a app primarily because it begins to become a distraction in this regard.

All in use are open throughout the day. I do close all apps using a script in Keyboard Maestro at the end of the day. Depending on my day I start a key set of apps through Bunch in the morning and open others as needed. Rarely close apps manually

Unless I think I notice a problem with a specific app (which sometimes happens), or Apple tells me I’m out of memory (which hasn’t happened yet on my 16GB M1 MacBook Air), I let all my programs run and let Apple manage the memory for me.

I often have two dozen or more apps open at once.

This morning I rebooted. Not even three hours later, I already have 15 apps open in the Dock, and almost a dozen in the menu bar.

Lately I’ve been thinking when the Mac starts getting twitchy I should reboot, or at least shut everything down. But I don’t actually do it.

Currently on a 2017 MBA with 8 gb of ram and thus, I am proactive about closing applications. Apps that run continuously are 1password, messages, fantastical, mail, drafts, and brave in my dock. In menubar, I have time machine, arq, bartender, little snitch, backblaze, default folder x, cardhop, and alfred. Typically I’ll restart Brave every few days. Google drive is a terrible offender. DevonThink does surprisingly well but when I have memory pressure, I’ll close it.

I’ll restart once or twice a week.

16GB RAM, M1 MBP: most of the apps I use on a day to day basis* stay permanently open, except for Zoom (because honestly I don’t want to see it after I’m done with it). I don’t worry too much about closing off apps because battery life on the M1 is great and I’ll just close things if I really need extra power (only when exporting video or under 20% battery and far from an outlet).

Occasionally I also have GoodNotes/Figma/Affinity Designer/Mail/VSCode/XCode open which may stay open for a week or two if I’m working on something that needs it at the moment, but I close them to reduce clutter when not in use.

I keep my work apps generally open all day, then at the end of the day close them all with this Keyboard Maestro macro: 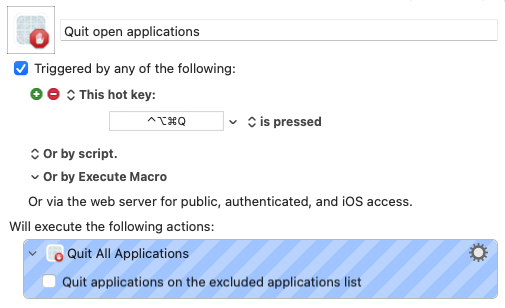 My usage of different personal apps is much more sporadic. I generally close each of those when done with it.

I have about 20 apps open right now and rarely have to close any. Occasionally an app will use a high level of CPU but for the most part MacOS seems to do a great job of managing resources. I don’t use it on battery often - I might be a little more aware if I did, although right now my CPU is 75% idle.

Removing the app open indicator in the dock is something I’ll try, so the app status doesn’t concern me. Good idea.

Most of the apps that live in my dock don’t get closed unless I don’t plan on using them for a few days. Apps that aren’t there and get used sporadically usually get closed when I’m finished because I don’t want them taking up space in the dock.

Leaving them open has little effect on memory and swap performance. The performance killer when swapping is page outs. Since code is immutable, it doesn’t get swapped out, only swapped back in when needed.

I think I am a little more casual about restarting my Mac than I used to be. I figure with Apple Silicon being so new and some things still having to run under Rosetta 2, an occasional restart couldn’t hurt.

Plus, I have to admit that I close large photo apps like Photo Mechanic, Capture One, and any of the Affinity apps if I’m done using them for a while.