Does anybody still use Path Finder (from CocoaTech)?

I used to use Path Finder, but I found myself spending more and more time in ForkLift as it supported FTP and did most of what I used Path Finder for. I was pretty excited when the new Path Finder version was announced though as FTP was on the list of supported features, but not so much when it released and it was read only FTP according to the docs. And ForkLift has been catching up, feature-wise.

So I’m playing with the idea of getting rid of PF entirely, especially since they moved to their subscription pricing.

That said, if they can charge $30 a year for it, I figure that somebody has to like it for something. Are there any super-awesome features that I may be overlooking? Anybody that’s a hardcore PF devotee that can share use cases?

I still use it. But haven’t upgraded to the new version. I do have Setapp. If the new version eventually gets on Setappbi will use it. If not I am fine with the current version. $30 a year for Path Finder is not worth that much to me. I will pass.

Tried it once if I remember correctly had trouble removing it from system but that was a long time ago. Like you I use Forklift as a file manager although instinctively reach for Transmit for FTP stuff

Still use it every day. Moved from single license to SetApp a while ago.

But not upload, only download according to the docs.

I use Path Finder every day. I have two favorite features: I like the way it does batch rename, and I love its preview pane because I can make it very large.

I use Path Finder when I’m manually moving and rearranging a lot files. It’s available to me through Setapp but I don’t use it enough to justify an outright purchase if I didn’t subscribe to Setapp.

I liked Path Finder for its dual window layout and its drop stack, but worried about it keeping up with the intricacies of Apple’s move to APFS. Now I use two Finder windows on their own Spaces screen. 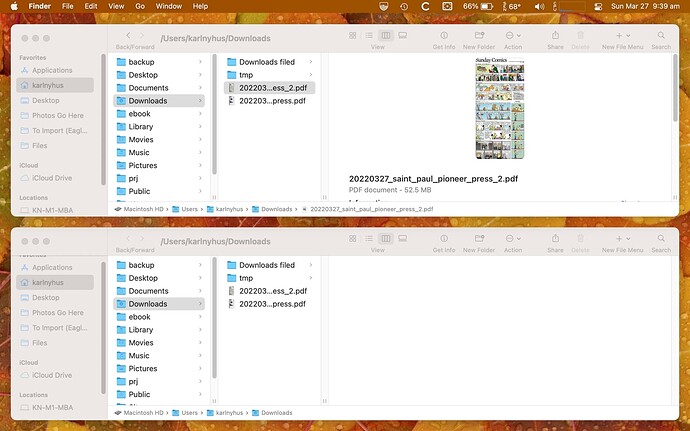 The Setapp Version of Path Finder is a version behind. The current versions is Path Finder 2022 (Though they say they are dropping the version numbers according to this blog It will be a while if it arrives to SetApp or it may never

The Setapp Version of Path Finder is a version behind.

Nope. The Setapp version is the currently released version that went subscription. It’s currently on build 2124 and it was last updated on 3/16/22.

As for using Path Finder, I find there is a lot to like. I really miss all the colorful sidebar icons in Finder, and Path Finder gives this back to me. I like being able to customize more of the layouts. I like that I can default to opening new windows in a tab. I like full row label coloring. Mostly I just want the Finder from pre-Mavericks.

If I could truly fully replace Finder with Path Finder then I would, but there are small paper cuts with that approach. Most of it boils down to how it works with Keyboard Maestro. I can’t run the same commands and scripts inside Path Finder that I can within Finder, and that ultimately proved to be more of an annoyance than the UI issues I have.

I started with Path Finder v4.x in 2007. I stopped with v8.x in 2018. I had an issue with v7.x where folders would open and not show any files nor subfolders. And thus Path Finder became unusable for me.

And as @kennonb noted, there were things that worked in Finder that did not in Path Finder.

Thus after v8.x did not fix the issues for me I gave up. Which is a shame as there were things I really liked about it.

I’ve used Path Finder for about 7 years, I started using it because I liked the idea of the custom icons in the sidebar I also like how its using the dual pane windows for moving and comparing files.

For the first 5 or so years I used it it was very stable but 2 years ago that update was painfully buggy which was also when they started pricing differently. Over the last year its been pretty stable but their support is pretty brutal, I was double changed and didn’ get a reply for 2 months. I was able to dispute with the CC company but it was still a pain.

I love the huge preview pane as well. I do a decent amount of batch renaming and use Name Mangler Its a dream for batch re-naming. About once a week I add “BestOf” to a set of JPEGS and I am able to trigger the change via keyboard shortcut by setting up a Service thru Name Mangler. One keystroke and all the selected files are renamed in 2 seconds without launching the app.

I posses pathfinder almost since the beginning, but use it only occasional during the last years.
While it has some valuable functions, it is really annoying me, to always have those extra window popping up, with those colorful extras, I never understand, or use.