Drafts for macOS is live in the Mac App Store

And prominently featured in the ‘Apps we love’ section.
Downloading now …

Downloaded, and up and running! Looking good!

Official announcement with link to screeencast by our very own MacSparky:

Drafts for Mac is now available in the Mac App Store! Free download. Get all the great capture, editing and sync capabilities of Drafts on your Mac today! itunes.apple.com/us/app/drafts/…

MacStories review by our very own Rosemary Orchard: 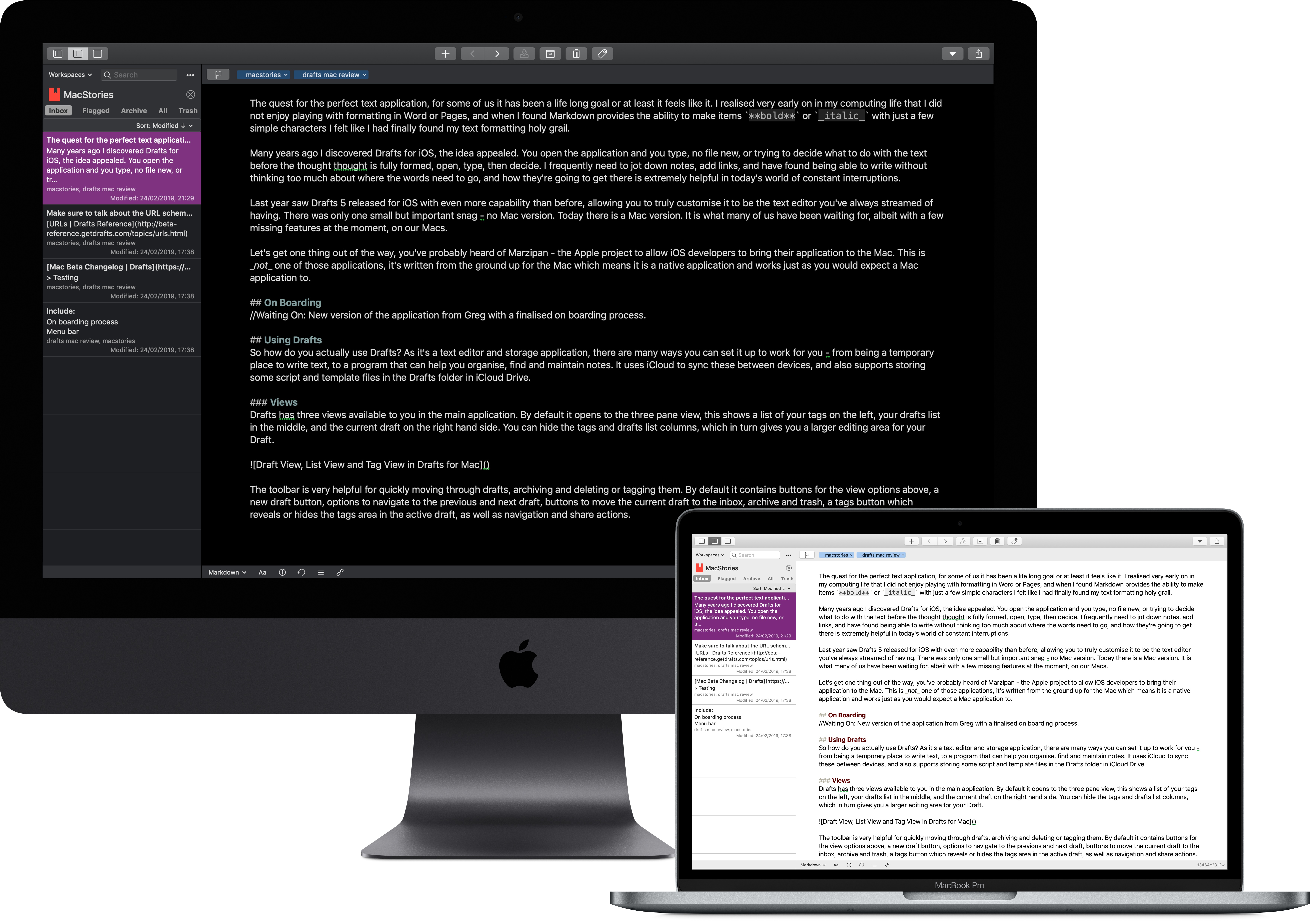 Drafts for Mac: The MacStories Review

The quest for the perfect text application – for some of us it has been a lifelong goal, or at least it feels like it. I realised very early on in my computing life that I did not enjoy playing with formatting in Word or Pages, and when I discovered...

This might be what makes me switch from Apple Notes. I don’t use the media options of Apple Notes (images, PDFs, etc). I like the idea of having an inbox of notes plus actual medium-term notes in the same place. Any thoughts from people also choosing between the two?

Any thoughts from people also choosing between the two?

Three? I’m using Notebooks now, along with PopClip and LaunchBar. I don’t see a need for Drafts anymore. I might have a look.

Since Drafts appeared in beta on macOS I have been much happier to move my various routine note-taking to Drafts. I previously used everyone for such things.
The joy of having the mac app in pro format is that the personally selected actions on iOS are available almost instantly on the iPad, so there is only a very brief delay in making a familiar action happen. It will be GREAT when the actions come in board, and I hope @anon41602260’s scepticism is unfounded.
We, as in those of us in the mac community, have some very talented developers working hard to make these devices work well. More power to them.
Download it, buy pro, read @RosemaryOrchard’s MacStories review, watch @MacSparky’s videos, and start using this. Tell your friends.

I tried Drafts in iOS and I’m not sure why it didn’t click with me. For something that’s $2/month as compared to free Notes, it does not seem to give me a whole lot of value as compared to Notes.

On the Mac, I use Skitch a lot for screenshot and annotation. Skitch saves into Evernote and I really like the quick entry of text through the Evernote menu bar icon, so that also take cares of a quick note taking that Drafts is famous for.

I’d be interested to discover new workflow that Drafts can do to help me saves time but at this moment, I can’t see nor think of any.

One thing that differentiates Drafts from other notes apps are its Actions. Thus the name, where text starts.

I like Drafts, but I don’t love it. I really hate when writing apps don’t let me choose my own fonts, font colors and backgrounds, and while there is theming with the Pro unlock I do not believe it includes font choice.

For years I’ve used Drafts as a staging area to send text elsewhere, and I don’t really find the new filing abilities to be particularly compelling compared to the competition, either.

Drafts is a good enough app that I wouldn’t mind paying a few dollars for it, but I don’t have a strong enough use-case to pay for the cross-platform Pro subscription when the free version (I did pay for the previous versions) does most of what I need and when the subscription doesn’t offer enough more.

Ulysses or IA Writer, plus PopClip, plus Yoink/Gladys does what I need.

Took me awhile too, but once it clicked I’m not going back…

To clear up confusion, Drafts has a wide variety of font choices. To access them, go to the Appearances Menu (Aa) in the editor then scroll down and font is a choice.

To clear up confusion, Drafts has a wide variety of font choices. To access them, go to the Appearances Menu (Aa) in the editor

Ah, thank you! I expected it to be a menu option (as in, I don’t know, every single text editor I’ve ever used?) but it does work nicely.

Never thought I’d ever say this, but I do miss some of Apple Note’s rich text. Auto numbered lists, checkboxes, clickable links without toggling a button that doesn’t stay on, etc. I get that Drafts isn’t a rich text notes app like Apple Notes or the like but it easily could be.

If I type 1. at the start of a line with some text then the next line is automatically started with 2., etc. It’s not the same kind of auto numbering, but it can be done. On iOS there’s a Tasks markdown too, where you can check tasks off. I can’t remember off the top of my head if it works on the Mac version yet.

I must have been doing something weird earlier, it’s working now. Thanks! Going to test Drafts as a note app of choice for some time

Thanks for the review.

I want to know why I’d pay a monthly fee for a writing app? To me, it just seems like giving away money. There are so many free options:

Somebody, please explain this to me!!!

To the best of my knowledge many of those free options, like Drafts, have both free and paid for options. One advantage with Drafts is the ability to create and use actions, built into the IOS app and without going outside in order to execute a shortcut.
So, if you want a free writing app, drafts is that.
If you want to do more with a writing app the pro version delivers. One subscription for iPhone, iPad and Mac OS is a good deal too.

Somebody, please explain this to me!!!

Essentially, the paid version of Drafts provides automation and scripting options that the others do not. There are time-saving or mistake-avoiding iOS workflows that impossible without using Drafts. If you are just thinking of Drafts as a place to store text, I agree you needn’t subscribe.

One thing that differentiates Drafts from other notes apps are its Actions. Thus the name, where text starts.

They don’t seem to have released Actions yet in the MacOS version. A shame as this is the big reason why most people go to Drafts.

I’m installing it just to try it out!!!

Drafts really makes a lot of sense on the Mac, IMHO.