Hi all. Looking for advice. A 6-year-old in my life is very much into art and wants a “drawing tablet” for the holidays.

One option is obviously an iPad mini with some drawing programs, but even with ScreenTime, that adds a host of other complications. And when we asked if they meant a tablet (Fire, iPad, etc.) generally, they said no, a drawing tablet. So they’re clearly imagining some kind of dedicated thing.

Any thoughts? Kids are great at imagining the perfect thing that doesn’t exist, but I thought I’d cast a wider net and see if there are good options out there.

I’d go for paper and pencils.
I’m not a child psych, but think there are lots of important lessons in using physical objects (including sensory and motor learning), not having ‘undo’ and being okay with ‘mistakes’, etc.

Agree with paper etc. being better. As far as the product they want, I’m guessing it’s something like this. Have seen many children that age with equivalents. 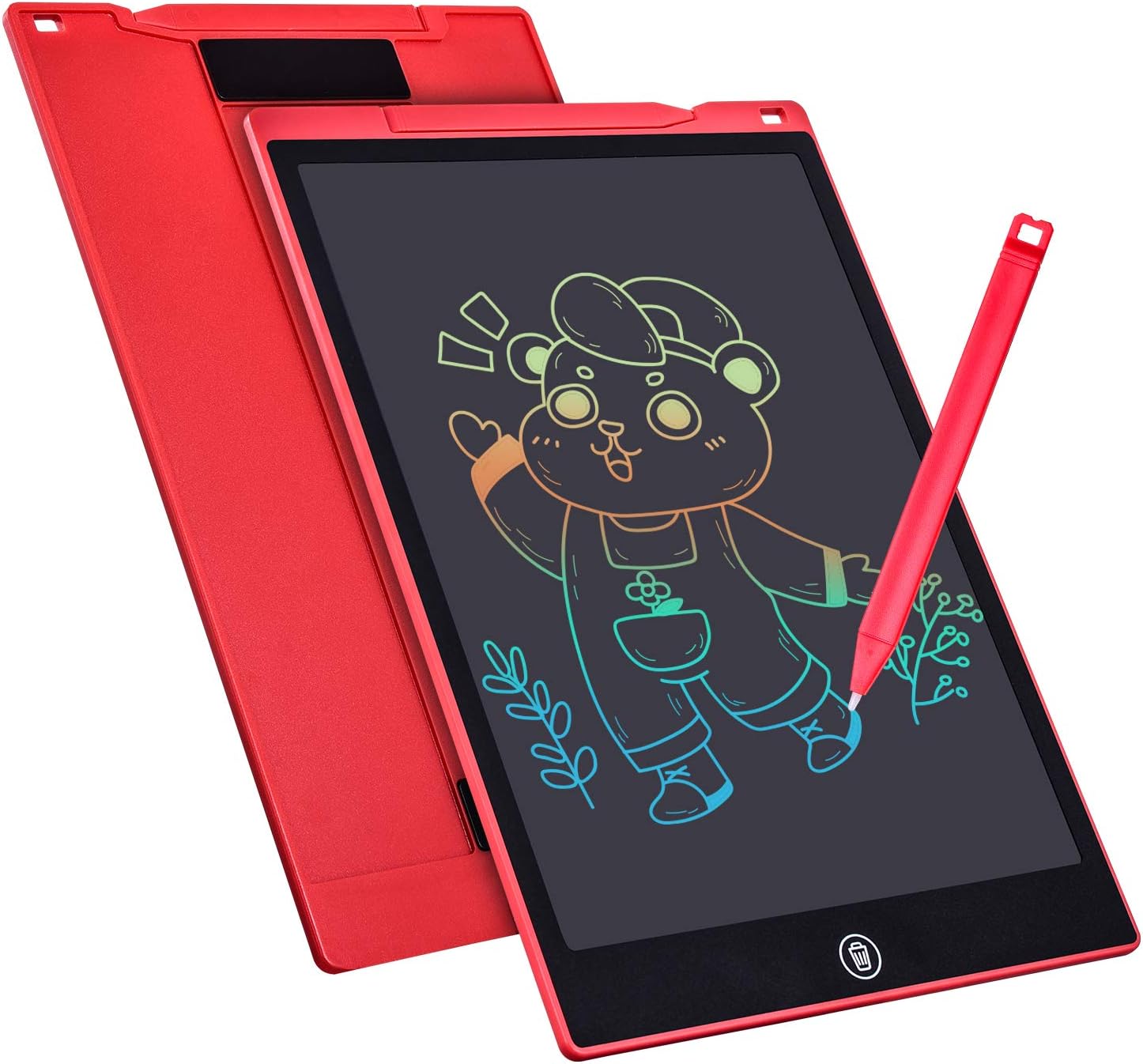 This would just be another medium!

If you are asking about Drawing tablets specifically then Wacom or something similar.

This is as expensive as an iPad. I won’t give a 6 years old a dedicated electronic device with this price, no matter how talented they are.

Back to the pen & paper, drawing tablets are just fancy devices, even professional designers do not usually use them, they use pen and paper then digitize. Pen & paper are by far more superior. DaVinci didn’t have tablets, so please reconsider this decision. A 6 year with a dedicated electronic device is a big question mark to me.

Kids these days draw with their iPhones and fingers. I always watch them in amazement because as an artist, I couldn’t imagine working on a small canvas. This is my SO’s 12-year-old niece and another one is our friend’s 10-year-old daughter. When I lend them my iPad Pro and the Pencil, they’ll just draw the entire day until the batteries run out.

Your daughter is probably looking for a way to be able to draw everywhere. Does she have access to Youtube or other of her age that draws with a tablet?

We’re not really sure where this idea came from. The kid sometimes gets to draw on someone else’s device, but when asked said they aren’t thinking of an iPad. The idea is clearly not any kind of replacement for paper and pencils/pens/markers/crayons/etc., but an option for a different sort of drawing.

My daughter is 7 & does tons of analog artwork, but also loves Procreate on the iPad.

The screen is a wee bit small on an iPad mini but it might be just right for a 6 year old. A regular sized iPad might be a better idea and your 6 year old could certainly grow into it. Plus an iPad can be used for scores of other activities, not just art.

Do you happen to have your own?

You might want to see if you can test them out at an Apple Store.

They may have drawing tablets just for that purpose but that is hardly necessary. I’d get a regular sized rebuilt iPad with a pencil and your 6 year old would be all ready.

Procreate is a terrific app and I imagine a 6 year old would enjoy it. I love it myself. Inexpensive, easy to use. Great app to grow with the child.

There is a terrific amount of artwork that can be done on an iPad especially with the Pencil.

And I am all for old fashioned art as well. Kids at age 6 need lots of practice cutting and pasting. Art can be incorporated into just about anything your Munchkin studies. I certainly did it with my students.

Your child can use the basics. Crayons, paper, construction paper, finger paints, clay, scissors, rulers. Skip the markers. They finish in 5 minutes and make a big mess. LOL!.

If I happen to see a good art guide I’ll keep you in mind as I am looking for one. Apple has some cool projects online that the kids can do. Some of these need minimal supervision.

National Geographic has a nice guide for photography. I’m looking for art stuff for gifted kids. Not sure if that would be geared for a 6 year old. I’m looking for my cousin’s grandkids and they range between three and nine.

But I am thinking that the iPad would be your best bet and show your child why. An art tablet might concentrate on art (as a graphics tablet would do for an artist). Why not use an iPad for a myriad of purposes?

If you need ideas, just holler. I’d love to help.

Thanks! This is great, and good to have feedback from an early childhood expert! Much appreciated.

Interesting idea about a larger iPad. I could probably get a refurbished one that works with the pencil, maybe even cheaper than a newer mini, which I think would be required to use a pencil. Worth looking into!

And oh boy does she like cutting things up. Little bits of paper all over the floor. All. The. Time.

You are so very welcome! If you need any more ideas just let me know.

Charge her to pick up 20 pieces of paper, e.g., to get out of the room and watch most of those scraps of paper magically disappear.

A larger iPad will give her more room to work on when her fingers are still learning how to best grasp a pencil.

The refurbished iPads are every bit as good as the new ones. And I think there is a size in between an iPad mini and an iPad Air. (Apple Care would tell you.) Just make sure one is compatible with the Pencil. The weight in an Air might be a little much but she would grow into it. I just put mine in my lap to draw.

It is great that the iPads are incorporating the pencils because, e.g., my friend Mike’s 5 year old is being taught keyboarding but not printing!

Another fun thing about an iPad is that it has a camera in it! (Just make sure you get a case or have her keep it on the rug). I wouldn’t buy a computer device on Ebay but it is probably fine to get a compatible case.

Oh there is a neat app that makes your iPad like a light box for tracing. Trace Table.

Oh I surely would! I’d absolutely want to encourage any child with that sort of intrinsic motivation to pursue their passion! And as an early childhood educator, I’d encourage parents to consider such a device as almost ideal gifts. (Like anything else, you as parent set the limits. Personally, I’d limit games but some are terrific.) Also, there are rebuilt iPads that can cut the cost some.

The only reason one might hesitate in doing so might be the assumption that a child might not take care of the machine. All it would take is a little patient instruction and adult insistence and that child would be just as likely as anyone else to take care of their machine!

My brother is a professional graphic designer and has used his Macs to further his career.

It really is not a matter of either/or but rather an extension of that interest in art. There are a lot of things I can do better on an iDevice and others that I can’t. Involvement in one doesn’t preclude the other.

If you were to take sketching for instance. Any artist will likely improve from practice- be it with an Apple Pencil or with a graphite pencil. They are still picking up essentially the same skill in that case. The pencils can pick up on pressure, you can shade, no matter if it is the modern device or the one that the masters used. In fact, I enjoy the Apple Pencil as it is nice because it glides some. (There’s an inexpensive “Bluetooth Finder” app which will track your Apple Pencil.)

I might even be able to venture into more mediums which are covered by the art apps. Art supplies can get very expensive, very fast. If you are exposed to pastels eg and appreciate them, then they’d certainly warrant looking into getting a nice set.

I can only see marvelous things happening with the use of an iDevice as an art machine. With the way DaVinci experimented, he might very well embrace a modern machine which could have assisted him in his artistic pursuits.

For the life of me I cannot think of any bad habits that might be picked up on a device and not on art manipulatives. Someone mentioned erasing… well, either way you can use an eraser, incorporate an error, paint over it…

As I mentioned, there are schools that are teaching keyboarding but not printing which is rather absurd. Well, an Apple Pencil would certainly help a first grader with manipulating a graphite pencil which is a necessary skill for both writing and drawing.

Furthermore, there are a host of other activities for a iDevice and a youngster. Maybe you don’t have time to read the same story over and over and over. Your Ipad won’t mind at all and can fill in if you are not available. (You could record yourself reading a story.)

All that artwork covers essential skills which helps a child in their development to be successful learners in other areas.