For the iPad illustrators among us

A new tool, Darkboard, for holding the iPad on Kickstarter from the makers of Luna Display. 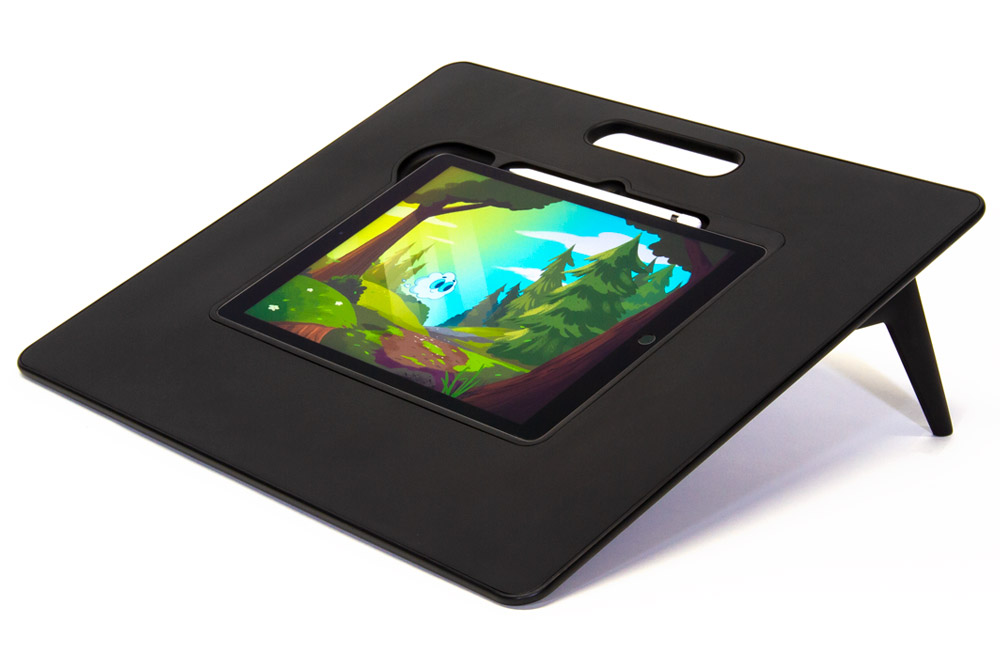 Sketchboard Pro for iPad Artists creates a completely flat surface around the iPad, so it's just like you're drawing on flat paper. The Sketchboard Pro offers support and stability freeing the whole arm for drawing, so artists are able to draw more...

I looked at darkboard and thought it was interesting, but if we are to believe there are new iPad’s reasling soon and the dimensions change slightly it would be redundant before release for many users.

I have the Sketchboard Pro and love it, BUT there are a few design differences between the two that I’m excited about. The iPad clips in (it can fall out of the Sketchboard), it’s presumably lighter weight, and there’s not a hole in the middle of the back that causes the iPad to pop out if something under it comes in contact, like a knee or armrest.

it would be redundant before release

I’m concerned about this, too. But it’s not terribly expensive (costs 40% less than the competition, at least on Kickstarter) and it seems that they’re already offering the foam cut in different sizes.

They said it’s going to support whatever iPad sizes are available before it ships—so whatever sizes are announced in the next 5-6 months.

if we are to believe there are new iPad’s reasling soon and the dimensions change slightly it would be redundant before release for many users.

It would seem that they anticipated this. Scroll down three quarters of the page and you will find this text (bold in original):

Darkboard will support the new 11” and 12.9” iPads announced between now and when Darkboard ships. Note: Darkboard does not support the iPad Mini.

You will select your Darkboard model after the Kickstarter campaign closes.

Of course, that seems to assume slight or no changes to the dimensions. Major changes would obviously require a redesign.

Interesting, I think (possibly) they added that in after the page went live.
As I have an lunar display I got a pre-launch email so looked it at then and haven’t since.

I backed it primarily because I couldn’t justify the higher price of the Sketchboard Pro. I use a different stand on my desk where the iPad is mostly for reference, but I can also use that stand for a slight elevation on a tabletop if I want it. Most of my tabletop work is handwriting.

I expect to use the Darkboard on the couch, and I have active cats, so it needs to be secure in any stand or case. I’m sure this will be a good fit for me. The bigger question is how much I’ll use it! I tried to use a standard drawing board on the couch. It gave good support, but it was too heavy.