From a true Mac lover

I recently decommissioned my 2008 Mac Pro. I had kept it around due to some old software that will not run on any current machines. That problem is now dealt with.

That machine had been with me through so much life…I upgraded everything in it except the of course, the processor. Finally, it was just too old to upgrade…you know the sad tale! I literally sobbed at the idea of throwing it out.

So…I pulled out the graphics card, which I could still sell and as much other stuff as I could so that it would be lighter and…I made a bench out of it! 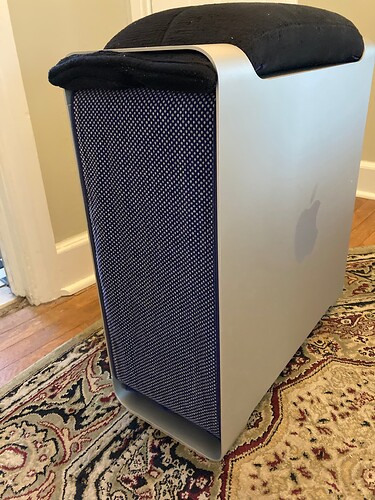 I made the cushion out of an old bathmat that would no longer stay in place on the floor, and I just love the way the dotted fabric mimics the grill patterns of the old machine.

This was truly Apple’s most beautiful machine (and in its day, relatively affordable for those of us that like expandability).

What do you think?

I like it! Neat idea. Did you need to sell all the guts to do this though? I’ve learned from painful experience that I’d regret doing something like that.

No, I didn’t need to sell anything. But hardware doesn’t age well, so if someone could make use of the graphics card, why not get rid of it? If I ever wanted to actually use the machine again, I’d just pick up a used one somewhere. I also removed the hard drive(s), 2 of which were SSDs, and now happily reside in my Mercury Elite Pro Quad which is connected to my current Mac. I had already changed out the optical drive cuz the original died, so I wanted that to put in a drive housing and use on my other machines.

This is all fair! Good point on just buying another. I like this project. My father built a bench when I was a kid using a soft-but-somewhat-firm material that he wrapped in carpet. This had the benefit of making the surface of the bench look flat, but it was still nice to sit on. That’s what your Mac Pro reminds me of. Have you considered something like that?

I just sold my 2008 Mac Pro yesterday. Listed it on Craigslist and it went to someone who wanted a cheap Mac. Served as my file, media, and backup server for years until I switched to a Mac Mini with attached storage.