Getting rid of marks on my MacBook Pro's screen

I have a MacBook Pro (Retina, 15-inch, Mid 2015) and my usual clean screening method (damp microfibre cloth) doesn’t seem to work on it. I was able to clean the screen on my 2012 MacBook Air just fine that way but there are lots of marks on the screen of my MacBook Pro that refuse to go. What do you guys reckon I could do to get my screen clean again? 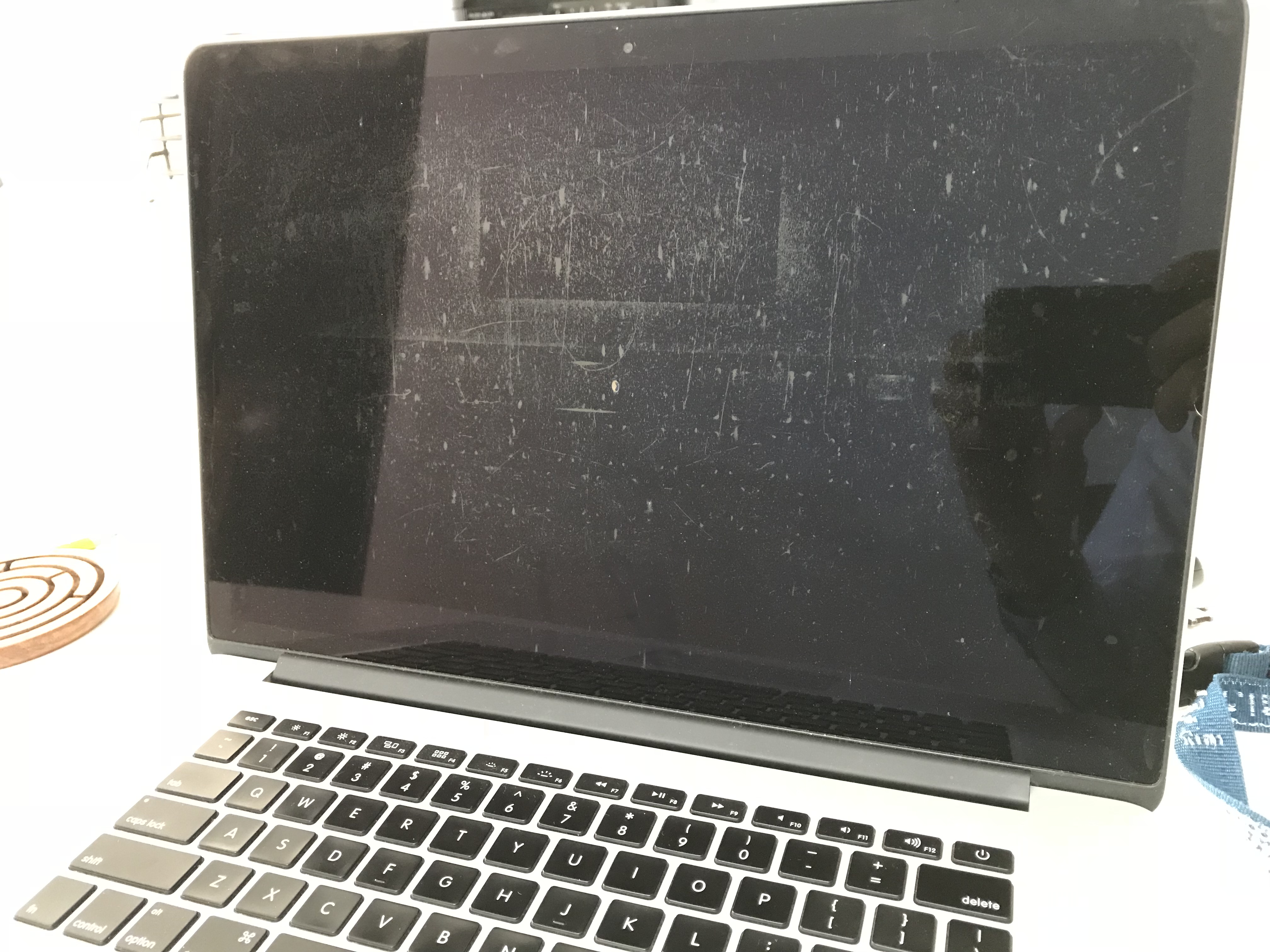 Have you tried the Genius Bar? My 2016 had permanent marks from the keys and they replaced the screen for me. I think it happens from pressure on the closed lid, like an over-packed backpack in my case. Design flaw IMO.

Unfortunately there aren’t any yet where I live (India.) This definitely does seem like a design flaw. My MacBook Air, which I used to pack in the same backpack and used no differently, doesn’t have a single mark after more than six years of use. My co-worker, who has the same exact MBP, has the same issue with her screen.

Most probably that’s your anti-glare coating on your screen that’s gone bad. I had the same issue with my late 2013 rMBP.

Not sure if you’ve used any cleaning products on your screen, at the time Apple said they maybe the cause.

Yes, I agree that this is a design flaw. I purchased a screen cover which I subsequently left at a meeting. Never used any cleaning products. My screen looks like the OP’s.

Why Apple can’t make a Gorilla Glass laptop screen that would eliminate all these problems is beyond me. My biggest disappointment with my 2016 MBP (love the keyboard BTW) was the fact that the glossy screen turned out to be made of cheap plastic.

I have only always used a damp microfibre cloth but on a few occasions the cleaning person at work might have well meaningly wiped it down with some sort of cleaning solution. Is there any way to fix this?

Yes, there’s a way to fix it. You have a perfectly good excuse now to get a new MBP

Other option is to check with Apple if your laptop qualifies for the program they had for screen replacement. That will require you go to either an Apple Store, or to an Authorized Service Center.

Hahaha. I actually really like the one I have (15-inch Retina MacBook Pro from mid 2105, the one with all the ports) much more than the newer ones! I’ll take it over to an Apple Store when I’m travelling next. Thanks for pointing me in the right direction

I wont labour on this matter but this was an incredible revelation today.

I was simply trying to remove some tape adhesive from the screen this afternoon when I grabbed these from the cupboard in order to try make the task easier.

It wasn’t until I Iooked at the monitor afterward that the marks which had by this point completely engulfed my screen showed a gap.

I took a chance and continued wiping in a circular motion, discarding as soon as the wipe showed any sign of drying out.

About 5mins later I had made it around the entire screen and it looks like new.

I have attached a pic of the wipes so you can get the right ones. I did not take a pic of a before, honestly not knowing this was going to work or not. Apparently because I am a new user I cannot add more than one pic but if you want to see one of the monitor let me know and I will post another reply.

I hope this helps. I am now chuffed to bits. Maybe you removed the clearing completely?

I just want to confirm the use of facial cleansing wipes is the perfect way to solve the MacBook Pro screen marking issues!

Yes it does remove the anti glare layer, but it’s buggered anyway and looks shit

So one facial wipe, it took me 5-10 mins, it literally just wiped off! Then a buff up with a micro fibre cloth and the screen looks like new ! I just tried with normal wet wipes. It Works!!!
I can not believe it. I was ready to replace my Macbook just because of the dirty screen. Now it’s like new.
Thank you!

This happened to me, they replaced it for free a few years ago, can’t remember exactly when. They told me never to use cleaning products and I never did since, just, as you did water and microfiber. Hard to tell from a photo but in my case I need sometimes a few cleaning sessions with just water and microfibre to clean it. Worth a try, you have to clean the microfibre quite often with soap and make sure you rinse it thoroughly. That is if it is not a screen film issue.