hey MPU, for those who use GoodNotes, does anyone have a sample workflow or organization, they would like to share?

I am trying to clean up my setup more and to utilize the app better. For a while, I had a notebook per subject (general notes, project specific notebook, etc). But then after a while, I tend to forgot I wrote something. So for example, in terms of usage and memory…

Also for reference, at my desk is a moleskine notebook for when its needed and post-it notes, which i find sometimes easier, if i have 2-3 specific tasks in mind that need to get done in my daily morning, much easier than going through Omnifocus which has become more of a long-term task management style.

It can be messy to think about where a digital notebook fits into everything. I just embrace it as another place to sketch and don’t expect it to do reminding or organizing work. I have a Siri Shortcut on iPad that opens a specific Goodnotes notebook for me. That gets me using it often enough. If I’m taking action-oriented notes in Goodnotes (not typical), I put any tasks/followups elsewhere immediately afterwards. If I’m making something to share (e.g. a UX diagram that the team needs to see) I export the page or share a screenshot to that other place and just leave the old one in the notebook. Flattened PDF archive into DevonThink, but I don’t do it before the document is done. I don’t delete the document afterwards because there is no risk I’ll accidentally add to the wrong one (so far.)

Also, if you’re often wanting to make notes that will end up in DevonThink, you can make them directly in DTTG3 in New > From Template > one of the blank PDFs. It doesn’t have as many tools, but all your sketching and note-taking will go directly to your database and won’t add an irrelevant page to an existing notebook.

Again, messy. Curious where you end up.

Edit: Notes also works well for quickly creating an item you want to share/store elsewhere, and IMO is quicker to clean up than Goodnotes, especially as you can quickly do it from your Mac.

those who use GoodNotes, does anyone have a sample workflow or organization, they would like to share?

I have a few notes in Goodnotes that just keep getting added to, my drawn out garden plan for example.

For most I just create a new note, name it and start taking notes. When I review my notes later I either use the Goodnotes to Obsidian shortcut that does a text recog. on the page and sends it to my Obsidian inbox for processing or, if the notes have lots of drawing and scribbles going sideways, I save them out as images and PDFs and then figure out how to get them into Obsidian as noted with included images.

For some I take the notes, and tasks get pulled out into my task manager Omnifocus usually by retyping but sometimes I’ll do text recog, copy and paste.

And for some others once I am done I realize I do not need them at all. So they get deleted. I tend to remember stuff better if I’ve written it down and sometimes just the act of writing is enogh, I don’t need tokeep what I’ve written at all.

Once I’ve extracted the info from the notes I delete them from Goodnotes.

I treat Goodnotes like an inbox that has to be checked and cleared out fairly regularly. I try for every week but sometimes that doesn’t happen.

I don’t use GoodNotes to track anything I have to do, only for summarized notes on various subjects. I use it for stuff I might want to look up again later as a reference, so I chose to use Auto-Backup & DEVONThink. In GoodNotes, I set the Auto-Backup to PDF, in a Dropbox folder that is indexed in DEVONThink. I can even search the handwriting in the indexed PDF (when my writing is minimally recognizable, which is most of the time), so that’s a plus.
I have only. Used this setup for a few months, so it might evolve with time, and I would be interested as well to know about other setups.

I find it important to take notes in meetings, but not to get distracted from the the conversation with anything more than the writing. I also find it important record-keeping to embody all decisions and follow-ups in the body of the note, so I’ve always kept note of actions (my own and others) in my notes, which are usually done in GoodNotes. I have some shorthand notation that I use when noting actions so I don’t spend a lot of time thinking about them during the conversation. Finally, I find it important to reflect on the actions I recorded in my notes before embedding them into OF – so I always find time after the conversation to go back over my notes, amending them, adding clarifications, and, importantly, reading over the actions I recorded to and editing them to ensure they are viable and understandable. It’s only then that I add them to OF in their appropriate projects with tags, dates, etc. To do this, I open GoodNotes and OF side-by-side in either an iPad or Mac and work between the two apps to record the actions that need recording.

I do much as @anon41602260 described: “To do this, I open GoodNotes and OF side-by-side in either an iPad or Mac and work between the two apps to record the actions that need recording.” The difference for me is that I use Apple Notes for typed notes and send each task directly to Reminders via the share extension as shown below.

There is one downside to this. Apple Note’s default behavior is to insert the name of the note, not the task text in Reminders. The upside is that the link back to the note is automatically added to Reminders. 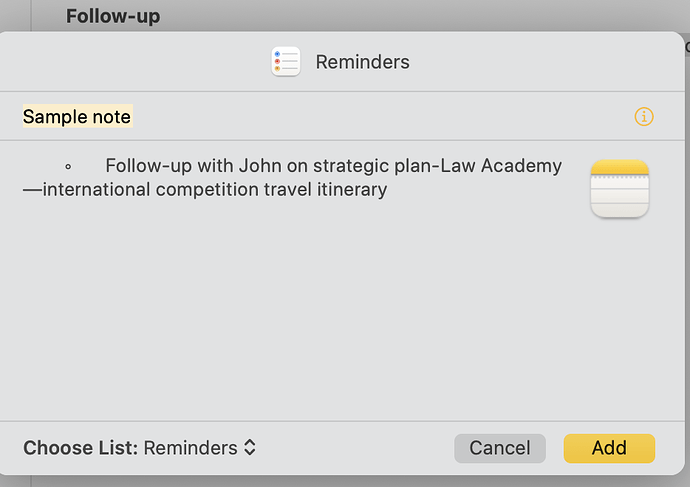 To avoid having the note title showing as the task name, before selecting share, I copy the task text so that when Reminders opens I just past the text in place of the note title. Not elegant but takes perhaps 1-2 seconds so it is hardly a burden. The result is this: 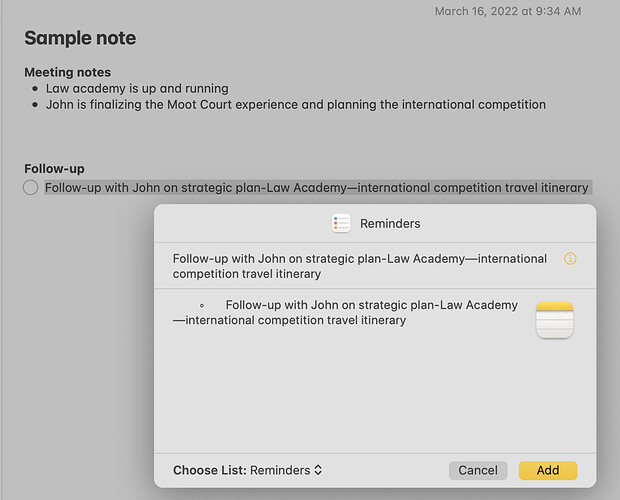 I’m not sure if @FrMichaelFanous is writing or typing his notes in GoodNotes and I realize my comment is not GoodNotes specific but although I occasionally use the Apple Pencil for handwritten notes, I prefer typed notes because for my purposes typed notes are more portable. Just my two cents, which is probably what my comment is worth.

That said, one can convert a handwritten note in Apple Notes to text and then copy/paste into Reminders. The downside is that the link to the Apple Note is note automatically inserted. 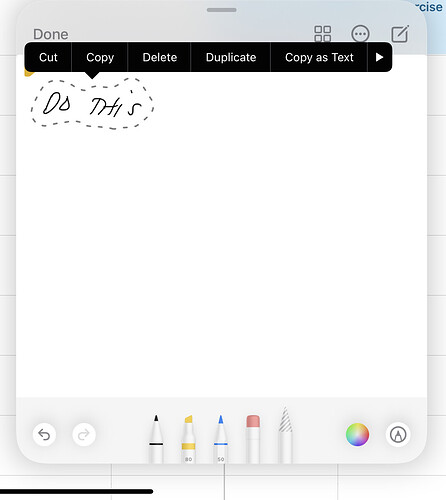 **Result in Reminders, with the link to the Apple Note:

However, if you convert to text, copy and paste INTO APPLE NOTES, you can then share the converted text directly to Reminders and the link is created. 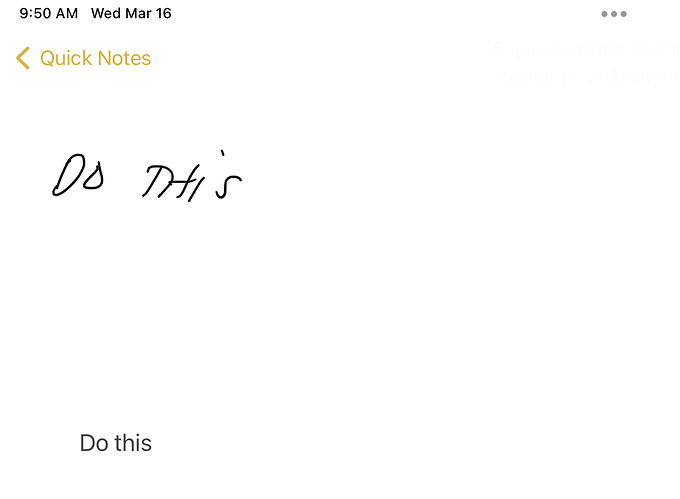 Results in this in Reminders:

I am a daily GoodNotes user but also struggle with organization, so, I am excited to hear what others have to say in this thread!

After years of using this app, I have found the workflow that has been most helpful to me for staying organized is… being messy first. Early on I started a “Scratch Paper” notebook that I use like a handwriting version of the Drafts app. I write/draw first and then (maybe) process later. It’s just a blank stack of unruled white paper that is with me at all times.

I use this for brain dumps, packing lists, meeting notes, doodles etc. and, honestly, most things just stay in this notebook, I don’t try to clean up, it is just like a pile scratch paper to me. For the nuggets that are worth saving, I either export the page or copy and paste the bits I need with the lasso tool.
.

I have a Siri Shortcut on iPad that opens a specific Goodnotes notebook for me.

Great idea, not sure why I hadn’t thought of doing this but will be adding a shortcut (and home screen button) for my most used notebooks straight away, thanks!

Cool use of GoodNotes – scratch paper rules the universe. If there was a museum whose only exhibits were the crumpled up wads of note paper tossed aside by the geniuses, poets, artists, scientists, and leaders in global history, it would be a truer portrayal of the progress of intelligence than all the “real” museums put together.

If there was a museum whose only exhibits were the crumpled up wads of note paper tossed aside by the geniuses, poets, artists, scientists, and leaders in global history, it would be a truer portrayal of the progress of intelligence than all the “real” museums put together.

I love this and it is

% accurate in my opinion!!

I might look into considering this workflow, because at my desk is a moleskine notebook (or any notebook that comes in stock when I buy bulk). It’s my scratch notebook of stuff, once that ‘random’ thought has been solidified into some other workflow, I get my shiny red pen (pilot G2 07) and make a big red X through that page. Once done, for some odd reason, perhaps I am a packrat, it goes into a box. I have yet to part with these notebooks. LOL.

I am sure someone will ask why I don’t throw them out…oddly for some strange reason, I recall, that earlier in 2020 I was shopping for hard drives because I wanted to upgrade my Synology, I remember jotting down all the prices, coupons, doing a bunch of cost calculations per Gb, and seeing which Synology I would purchase, and how much other stuff would cost into it. I pulled the trigger on doing all that this year, I remembered I had done this, found the notebook, compared costs, and bought everything.

There’s also that one of my kids who was just starting to write and doodle…decided to draw and leave me a hand print in the middle of some notes. The same child also left us a big orange paint handprint on our dining room chairs. No heart to remove it or clean it. Maybe one day, I will cut it out and frame it.

I use Goodnotes in two different ways - 1) random brainstorms and doodles that don’t amount to much and 2) pieces that I want to archive or work with later. The first group is a mess. The second I archive in a group that hazel copies into an Obsidian folder and are indexed by several different Devonthink databases. I discussed that approach a little here.

I have a planner in there I bought on Etsy. I just goof around with it every so often.