I purchased hook, and use it. I really like the ability to quickly copy a link to an email, or a finder file, and then linking that back to a daily note. Of course, I also use the copy a link function and a markdown text expander snippet that creates a link - that works fine for the craft note, but a finder file, well, that is a different story.

I have Devonthink. I work with a lot of files that may change fairly often, and storing them in Devonthink with a link in my daily note… It doesn’t seem to survive versioning all that well, without a viable save as function.

So what have people found with Hook? If I go in and dig in and use this, does it seem to remain solid? Do the links really maintain their integrity even when deleting files? Does anyone do regular maintenance on their shortcuts? (Seems they could become unwieldly after a while).

I work in Software for a living, and have no problem purchasing. And so far, everything seems great! Just wanted to know if there were any other thoughts out there.

It depends on what you mean by versioning, of course, but have you seen that latest iterations of DT3 include a method of saving successive version of a document?

Essentially, it’s a Smart Rule which duplicates a file into a folder within the current group, adding a time stamp to the duplicate’s name and tagging and locking it in the process.

I’ve not used it in anger myself, and it’s clearly not Git or even Apple’s versioning, but I can imagine it being useful in some circumstances.

Hook is very useful, if only for its ability to create a markdown link from almost anything, but I can’t really comment on its stabilty as I haven’t studied it in depth.

Essentially, it’s a Smart Rule which duplicates a file into a folder within the current group, adding a time stamp to the duplicate’s name and tagging and locking it in the process.

Interesting - what is the link to this discussion?

Second paragraph of the OP.

I meant where is a link to the smart rule?

Ah, I misunderstood you, I’m sorry!

It appeared under the Smart Rule section in the sidebar in Version 3.8, looking at the Change Log (which I didn’t till just now…)

Added new default smart rules Create Version and Remove Obsolete Versions for simple file versioning. The first one should be performed before saving, the second one periodically, e.g., before synchronizing. Exclude the group Versions from search if you don’t want old versions to be part of toolbar search results.

Looking at the forum, it took at least one other person by surprise as well as me… 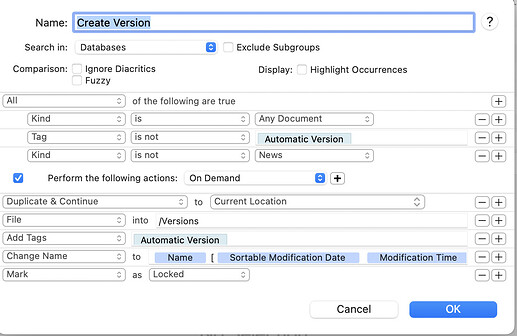 Another rule weeds them out periodically. 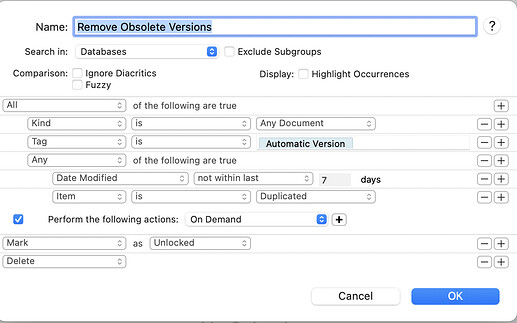 By default the first one runs on all files, and I’m not sure I’d want that, but it’s easy enough to make more specific, perhaps by adding a tag and removing after the rule has run.

I use Hook multiple times daily for more than a year and have never had any issues. Seems rock solid to me.