What are y’all using to host all your hazel rules and automations if not your daily use computer?

I have gotten pretty complicated with my paperless workflow (complicated to make it super simple). I have a combination of hazel rules, scripts, Automator workflows and Dropbox sync. I wanted to make sure it was always running, so I moved everything over to a remote hosted Mac desktop. I actually have a separate computer at work that runs one rule. I’ll get into that in a second. The remote host is “host my apple” and you can get VPNs or actual remote computers. I’m wondering if there is a better way?

One of my hazel rules notices when a new folder is created in client folders and if it is empty, runs an Automator workflow that adds the folder structure I want into that folder. Because I have another rule that goes into the folders and combines the PDFs of one folder when they are added, I had to put that rule on a separate hazel in a separate computer! If I didn’t, then the first rule would add the folder structure to every empty folder forever and ever!

As an idea, would it work for you to have Hazel create the structure if the folder it finds is empty and has no tags and then after creating the structure apply tags to them all so they will be “immune” to recursive processing?

The reason that wouldn’t work is because the folder structure that is applied has many folders that aren’t tagged that way. Then if someone ever added another folder in there, which happens, it would add the structure again.

Could you post the rules in question? I’m having a hard time visualizing why you can’t run them both on the same computer. (I’ve got dozens of rules on both my main iMac and my Mac mini server, and most rules on the iMac end up moving and tagging files to the server, but never had to have Hazel rules on both computers cooperate.)

Rules on Computer A that adds the folder structure and red/green tags:

Rules on Computer B that goes into all folders to combine PDFs in the folder named “14 - WNB”: 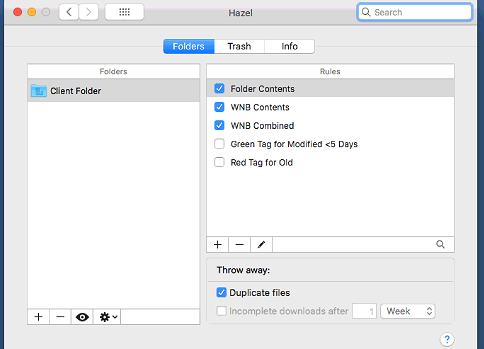 Seems to me that if the rule you are running on computer A were to run an AppleScript or shell script (Automator isn’t powerful enough) that would test that the folder is actually empty before creating the folder structure then there wouldn’t be an issue.

What are y’all using to host all your hazel rules and automations if not your daily use computer?

Does anyone have any thoughts on this question? I am thinking about something like this as well right now.

Just picking this up, I have a headless MacMini at home which I use for backup, content caching etc and I run some Hazel rules on that to handle scanned documents (I have a ScanSnap plugged into that headless MacMini).
I also have a co-located MacMini with MacStadium which I mainly use for Plex, VNC and backup. I also have some Hazel rules running on there. Yes some duplication but there are some things that are only suited to my offsite MacMini and vice versa.

[quote=“gnb, post:8, topic:8252, full:true”]… MacMini with MacStadium which I mainly use for Plex, VNC and backup. I also have some Hazel rules running on there. …
[/quote]
Hazel is the only reason it needs to be a Mac. IMHO the Mac mini rental (not co-locating, rental) is overpriced.

For the same amount I can get a Linux root server with:

Hazel is one of the few reasons to stick with a Mac mini. And since Apple dumped OSX/macOS server, moving to Linux is becoming even more interesting. If it wasn’t for Hazel…

For what you’ve described, yes overpriced. For my purposes and preferences (and I co-locate my own Mini on a gigabit connection), it’s an excellent service.