How can you backup your files when Optimize Mac Storage is turned on?

This question recently came up and I could not answer it.

If, for example, I create a new folder in iCloud (ie Taxes) it will actually reside in my Library folder. (~/Library/Mobile Documents/com~apple~CloudDocs/Taxes) . When my backup runs the Taxes folder, and its files, will be backed up the same as any other folder/file on my Mac.

Now if I turn on Optimize Mac Storage that may no longer be true. As I understand the process, depending on available storage on my Mac and/or the age of a file, that file may be deleted from my internal drive and replaced with a link to a copy in iCloud.

Let’s assume that has happened and the file is no longer on my drive. If I use Backblaze, in 31 days that file, which now exists only in iCloud, will also be deleted from my backup. At that point should anything happen to it (I accidentally delete it using my iPhone) in 30 days it is purged from iCloud and lost forever.

Or am I missing something?

Anything in the cloud… isn’t copied by BackBlaze.

Anything deleted in iCloud goes into a Deleted Items folder and remains there for 30 days.

You’re too fast, you caught me while I was editing. It seems to me that Optimize Mac Storage is a recipe for disaster.

More accurate to say - ‘if all your Macs are optimised for iCloud, then you have no backups or copies up of that data, other than what exists in iCloud.’

True, he could buy a $300 Windows PC, sync it to iCloud and back that up. But the person I spoke to has one mac and an iphone.

I learned that “two is one and one is none” years before I ever saw a computer. (Scoutmaster was ex-military). I told him AFAIK if he turns on Optimize he cannot protect his iCloud files.

It seems to me that Optimize Mac Storage is a recipe for disaster.

Optimize Mac Storage, or Dropbox’s similar feature, is great when you’re dealing with a laptop that can’t support your entire cloud storage on its internal hard drive.

However, if you want to be able to back it up, you’d better have another computer somewhere that has all of the files saved locally, and backup that computer too.

I had never thought about that situation but it does make sense. At that point somebody would be relying on iCloud for file storage. I always have a copy of my files locally.

At that point somebody would be relying on iCloud for file storage. I always have a copy of my files locally.

Me too. But that will be for a continually shrinking percentage of people. Steve Jobs was proselytizing about network storage (and not doing your own backups) since the last century: 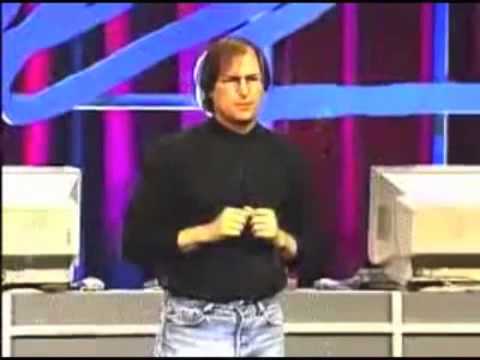 There are probably tens of millions of people around the world using smartphones as their primary computing device, and they don’t do backups, and their (limited) storage is on their devices but mostly in the cloud. Anyone using Chromebooks has lived with everything in the cloud, with backups taken care of for them. Fact is, we’re moving towards a future where we won’t have to expect most people to perform backups (they don’t want to, and most probably don’t anyway when they should), just as we’re moving inexorably towards killing off passwords as have existed for decades. There will always be a small minority of people who feel they need to manage their files locally and maintain their own backups, but looking at everything from current device usage I’ve mentioned to the way digital purchases are handled (music, movies, ebooks, audiobooks) even for those of us who manage our own backups, the idea that a copy of all one’s digital possessions must be held onto locally is falling away.

I see the potential for a premium iCloud service on the horizon - an optional “backup of your iCloud files” for extra fee.

I see the opposite: Apple continuing to move to support devs and users putting and keeping their files services in the cloud, the way they do with iOS devices, while offering the sop of Time Machine to those who want to back up locally (assuming they’re using “truck” computers).

How do they backup our data?

I researched Google when my company was considering moving email from our onsite server to G Suite or MS O365. They state: “Rather than storing each user’s data on a single machine or set of machines, we distribute all data — including our own — across many computers in different locations.”

Apple has always used Azure, AWS, and Google to store iCloud data. That’s a good enough recommendation for me.

Some reports last year would indicate they have stopped using Microsoft.

I had never seen that video, very interesting. Steve was describing today’s chromebooks. But he was able to do everything he described because someone somewhere was taking care of his data. Steve Job’s data.

For many years, I provided unlimited storage for personal files for the executives of our company. And you better believe the man who founded our company wasn’t going to lose any pictures of his grandchildren.

You are correct, most people never even think of backing up. I’ve had to tell a few that their pictures, etc. are gone forever.

Technology has improved to the point that I don’t worry much about all my data in the cloud disappearing some day. I am mainly concerned about accidentally deleting something. So I will continue to backup everything.

There’s an important difference between accessing your files (and in the case of NeXT the exact look of your desktop) when you log in, and having lightweight apps delivered to thin-client hardware.

Chromebooks actually echo Sun Microsystems and CEO Scott McNealy, who in 1984 trademarked ‘The Network Is The Computer’ (which Cloudflare trademarked again, just last year, a decade after Oracle bought the much diminished, hobbled Sun). Sun pushed ‘thin client’ computing too early, when network speeds were slower and often iffy and lightweight hardware processors were underpowered, and they did it long before Google took the ball and ran with chromebooks.

And it really had nothing to do with the man being backed up - everyone at NeXT had the same backup in place, as does every employee at Apple today, and no one there backs up their individual work computers.

I’ve had to tell a few that their pictures, etc. are gone forever.

That’s why Apple pushes iCloud as a repository of files - it’s far less likely you’ll loss data via distributed, redundant cloud storage than even a local backup (which could get stolen or lost in a fire), and most people won’t choose a 3rd party backup cloud like BackBlaze (which I use and recommend) for the $60/yr. For ease of use and overall safety there’s something to be said for using Google/Apple/Microsoft cloud storage for most people most of the time, and it’s generally a Good Thing that they’ve been eyeing for decades, long before they saw Services as a major revenue component of these companies’ financials.

For ease of use and overall safety there’s something to be said for using Google/Apple/Microsoft cloud storage for most people most of the time,

I agree. I’m a Gmail user and have reconsidered using a Chromebook, instead of my iPad, on future international trips - when and if air travel becomes safe again.

I researched Google when my company was considering moving email from our onsite server to G Suite or MS O365. They state: “Rather than storing each user’s data on a single machine or set of machines, we distribute all data — including our own — across many computers in different locations.”

But if it’s not in an SLA, it’s not any sort of guarantee. Large business customers typically demand (and pay extra for) SLAs and guarantees. I would make zero assumption that those protections are in place for the average home user.

I’m not saying that one’s local copies are going to be a replacement for cloud services, but having both options would seem to make quite a bit of sense.

I would make zero assumption that those protections are in place for the average home user.

Corps use SLAs to CYA but it’s FUD to say B2C users are SOL.

When was the last time you heard of someone losing files in Google Drive? Given the billion people who use it daily, and the multiplier effect of complaints in the internet, I think it’s impressively telling that we don’t hear about this regularly, or often, or even occasionally.

A vague statement about “distributed data” is worthless.

The proof of the pudding is in the eating. Railing against something because you haven’t been personally assured is less convincing when it simply works for hundreds of millions or more people every day,

I don’t disagree. @SpivR only asked about the method of backup used.

that doesn’t excuse the big cloud guys, including Apple, from having transparency.

AFAIK, if things haven’t changed in the past few years, neither Google or Microsoft offers backup to their paying customers. Google offers “Google Vault” an archive service, but those that want traditional backups have to use a 3rd party solution like that offered by Spanning.

The industry leader in SaaS data protection for G Suite, Office 365 & Salesforce. Get enterprise-class, automated backup and recovery that you can trust from Spanning.

Google offers “Google Vault” an archive service, but those that want traditional backups have to use a 3rd party solution like that offered by Spanning.

And the fact that multiple services like that exist probably indicates that there’s some need for them. There look to be over a dozen:

The proof of the pudding is in the eating. Railing against something because you haven’t been personally assured is less convincing when it simply works for hundreds of millions or more people every day,

If you want one story that (at a minimum) illustrates the need for backups of Google Drive data, consider:

An undated rant from a domain acquired 7 years ago.

Hundreds of millions of people daily aren’t reporting their data is lost, period.