How do weather.app rain percentages work?

I cannot figure out how the rain percentages work in the weather.app, and it’s bugging me, because the app seems to be a whole lot more pessimistic than reality.

For instance, this is today’s forecast (here in (normally sunny) Nelson, New Zealand): 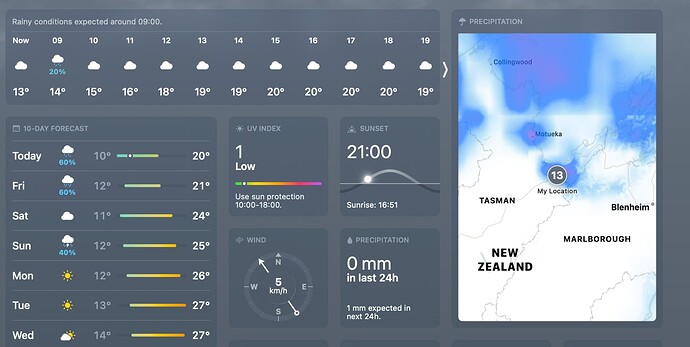 I can’t get my head around that. Any hints?

I asked a meteorologist about this once… the percentage is the portion of the forecast area that will experience rain during that time. It’s not a 20 out of 100 chance you’ll get rain (like a game percentage).

I think that means that the day percentage would indicate that maybe it’s a different, larger, forecast area in the second window?

I don’t get why they do the precipitation forecast this way though, so… I’m just guessing about the cause for the difference.

Not sure if this helps, but my interpretation:

Hi, my background is climate science (though I do little climate work nowadays).

Both answers above are actually correct, because it depends what country you’re in

In the UK the % is the % chance of rain, so @JohnAtl’s explanation is correct. I.e. a day with an 80% chance of rain is basically a 4 out of 5 chance of rain (and if you’re in the UK you might as well take your coat because it’s going to rain). But it could be that you only have a 10% chance of rain in the next hour because the rain isn’t forecast until later in the day.

However, this isn’t an international standard and the Americans do it a different way. They do the % of area where rain is likely to fall, as @wnknisely explains. Probably makes no sense to us in rainy countries but perhaps logical to America

I can’t answer your question about weather app but I’m guessing as it’s American they’re doing it the American way, and I’m also guessing that as a Kiwi you’re used to it the British way.

All of which is to say, weather forecasting is stupid and each country should just make up its own rules that reflect its local conditions. (e.g. Brits don’t need to know if it’s going to rain - of course it is. We need to know how wet it’s going to be and what type of coat we need

If you want more information check out windy.com. It offers multiple forecasts so you can pick the one you think is the most accurate.

It amazing how much current information it provides.

I learned this recently. It may be specific to some countries — I don’t remember where I read it — but it seemed really obvious to me in hindsight.

So it’s not “an 80% chance” it will rain but an 80% chance that you will be in a place where the rain actually falls.

Assuming the rain clouds are moving, then over time a larger area will be rained on than in a shorter time span.

A Chance of Rain: What Does This Really Mean? | Almanac.com

Ooooh. That’s intriguing. I lived in Scotland for 20 years, before I moved back home to NZ, and in that time I built a whole lot of habits and behaviours based on the weather. I didn’t realise, until now, that I’d learnt to read weather forecasts geographically! Cool.

@Clarke_Ching I don’t know about Nelson, but the forecast for Wellington is a highly hit-and-miss affair anyway. The entire forecast should come with a probability factor.

I’ve heard people say Victoria University’s forecasts are super accurate, but my experience of MetService ones is that they offer nothing but a clue, certainly when it comes to precipitation. They also forecast large areas that have very localised weather. The difference between the northern suburbs and the city is often stark. I would walk to my train in gloomy rain, only to end up passing people in the city in t-shirts.

Lol it’s the same with the UK weather forecast. My family and I joke it’s the only vocation where you can repeatedly turn in incorrect work and people still ask for your opinion

Nowadays I take the forecast from a couple of weather apps, look outside and then pick the one that seems most likely.

In defence of both our island nations (and the plucky weather forecasters attempting to predict the future), the large bodies of water we’re surrounded by and the hills/mountains they meet do make conditions very variable. It’s much easier to do forecasting on a large land mass where conditions are more stable and generally a bit slower moving.

And then the Met Office, the UK’s “official” weather forecaster = 20% chance of rain.

Looking out the window, I suspect Weathergraph is correct and the Met office are hedging their bets by warning there’s a 1 in 5 chance they’re wrong.

It occurs to me that the “% area where rain will fall” probably does make sense for much bigger countries like the U.S., where they’re forecasting over a large area and have to generalise a little (and where large areas may be quite uniform).

It doesn’t make sense on a small island nation like the UK (or New Zealand), where we have official weather stations every few miles, don’t have such a large area to predict the weather for and where the terrain can change a lot in small area. So for us it does make sense to do “% chance of rain” instead.

From my example above I’m fairly certain that Weather App is using the American rainfall percentage prediction, and is also reading satellite data at probably just a regional level (which may only look at the UK as a portion of Europe). I’m quite sure it probably will rain in 90% of England today, but I don’t care - I only want to know about my location, and asking it for detailed info on my couple of miles of England is probably a bit pointless since it’s likely extrapolating from a larger area and can’t account for the fact that the geography changes a lot in a small area. There are better free services available and Weather App is a bit redundant for us.

I have generally found Carrot to be reliable over the last few years, but having experimented with Weathergraph this year I have been impressed with it. I have Carrot running from Dark Sky, and Weathergraph is running from yr.no (that’s the free version, I plan to upgrade soon and will be switching to Open.Météo to test that).

The Met Office is ok (and probably the most reliable for the UK over time given that it’s their jobs to specialise just on one country), but their app is horrid so I don’t use it (also this comment is only relevant to any Brits reading this thread, sorry).

(though I do little climate work nowadays).

…because there’s no great interest in climate these days

You know what they say- if you can see [insert local landmark], it’s going to rain; if you can’t, it’s raining.

(though I do little climate work nowadays).

…because there’s no great interest in climate these days

Like many scientists, I’ve pivoted to “solving” the problem, and now work in conservation ecology instead. We still need climate scientists of course, climate science is exceptionally complex, but it’s not for the faint of heart working in a field where you are acutely aware of a global emergency that isn’t being attended to.

There are quite a few scientists (in various fields) who’ve switched specialisms so that they can contribute to the action needed in the absence of clear leadership. (The American scientist Peter Kalmus is probably one of the biggest switches I’m aware of - he was a physicist with NASA before switching to climate campaigning, but I’m sure there are many other equally interesting switches.)

Not sure if this helps, but my interpretation:

I think we should just say 6 out of 10 clouds will have rain in them.

I think we should just say 6 out of 10 clouds will have rain in them.

There’s also a percentage of cloud cover. In aviation circles the cloud was observed (though I think not forecasted) in “eighths” sometimes called “octa”. Eight eighths cloud is completely overcast. One octa cloud would generally be a few fluffy white ones. I know this from my late father who was a military pilot, but these days the airport Terminal Area Forecasts (TAFs) seem to use more general terms like “overcast”, “scattered”, and “few”.