How to measure percentage of Mac users?

We can easily find numbers on marketshare, i.e. the percentage of computers being sold. I’d like to know how to find the best estimates of actual usage of Mac OS.

Office computers may be replaced on a 3 year cycle, whereas home computers may be kept till they either have a hardware fault that is uneconomic to repair or can no longer be updated to the latest OS. Comparing the number of units sold per year isn’t a reliable indicator of % platform usage.

Some years ago Microsoft did a very slanted survey on Windows usage; including something like “do you have a Windows computer at home right now.” Despite never having owned a Windows computer, I did have one in my house because even before the pandemic I took my work laptop home every night. I’m sure many other Mac users had a similar situation and Microsoft were able to claim a high percentage of Windows platform penetration, ignoring the fact that many of us are obliged to use Windows exclusively for work and choose to use Mac exclusively outside of work.

If memory serves Macs were still a niche player before 2000 and didn’t really take off until the switch to Intel. Then the iPhone gave them another boost and they started showing up in previously Windows only businesses. Good times.

Now mobile is cutting into the home computer market. Something like 15% of US internet users are mobile only. And many smartphone users find a $300 - $400 Windows laptop or ChromeBook is all they need when they want a larger screen.

Covid and the lockdowns were great for computer makers but I think it’s likely Mac and PC sales may level off again. If I was a regular user who didn’t worry about backups I probably wouldn’t own a regular computer.

But this is just one MPU’s guesstimate.

There is a statistics for almost everything…
Marketshare

But I thought she was curious about users? I’m the only one that uses my MBA but a friend of mine has an iMac that his five children share.

You are right, but I think the only data that would be available are the marketshare data.
I can’t see, how to find out how many users are using a single machine, and to add those data to get an information about the number of real human users.

This site states the number of Internet users worldwide.
If you assume the number of marketshare of operating systems in my first link, you can get an assumption by the combination of these two data.

but I think the only data that would be available are the marketshare data.

I agree. The number of Mac users is probably greater than the number of Macs sold. But Apple quit reporting unit sales a few years ago. So to arrive at an answer we need to make a guess based on an estimate?

I hope @Diane grades on a curve

The data from my links were, as far as I understood, not based on the units sold, but on the actually usage of the internet by those machines, that is recognised by different webpages (and most probably some cookies). 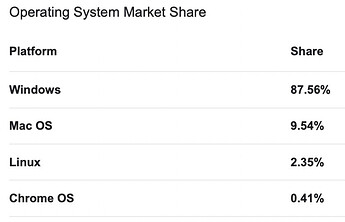 Thanks for all the replies so far.