How to remove software from App Store auto-detected updates?

I was backing up a lot of old files from an old 2009 iMac to my new M1 Max MacBook Pro 14" running Monterey. Among these files was an old version of Facetime from 2012 or whatever.

Because of that, the App Store updates picked up on this and now wants to update this to some later version from 2014, which is not only undesirable, but impossible since the app file no longer exists on my MacBook (I had removed all the backed up files after I got to a safe place with my laptop and transfered them off onto a backup drive.)

(and also, the Facetime app was from a completely different Apple ID that is NOT mine, so even if I click “Update” it tells me this and refuses to do anything, nor can I see where to manually remove it from the App Store menu.

How to do this?

I do NOT want to set up another user account, etc. I just want to get this old Facetime app OFF of the App Store updates list, which I hope might be stored as an entry in a file somewhere that I can just get into and delete??? 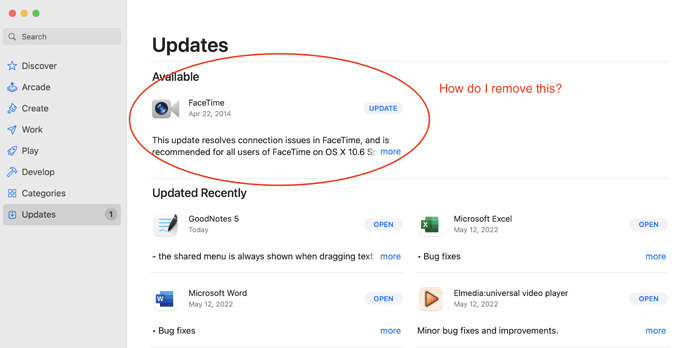 Have you tried hiding the app?

Hide purchases from the App Store

If you don't want to see an app in your list of purchases in the App Store, hide it. If you want to redownload the app, unhide it first.

The OP did not buy it on the same Apple store account so it won’t be in the Purchase list.

I thought it was worth trying but some App Store cruft is eternal. I have a setting from a Fortigate VPN app I tested on my old 6S that I still run across occasionally.

I’m not sure “Erase All Content and Settings” in System Preferences would fix this.

I was thinking that maybe there is some text config file buried deep within MacOS that contains this and I could just delete it from that file and it wouldn’t show up anymore? Surely this is stored somewhere. Its strange to me that the App Store auto-detects old software and then once that app is removed from the computer it doesn’t automatically update the list anymore. So weird!

Creating a new account on the laptop would probably work, but wow that would be a lot of setup work to get everything back to the way I like it again

Has this been downloaded in the past using another Apple ID that you no longer use? (It surely looks like it was downloaded using another Apple ID.) If yes, and if you remember the credentials for that Apple ID account, log into that account at https://appleid.apple.com/ and remove your Mac there as it probably remains associated with that account incl. for app store purchases.

My Mac is not associated with whatever that old account is. What happened was I manually copied a bunch of files over from this old iMac to my MacBook Pro and when the App Store app did its auto-detect software thing, it must have saw that I had this old Facetime app on the drive and then associated it with my updates queue. It doesn’t appear on any of my other computers, only this one MacBook Pro that I had it copied to for awhile. It has long since been deleted when I moved off all of the backup files from the iMac to my local NAS