I was listening to Back to Work ep. 400 on the iPad Pro and it made me thing. Why is everyone raving about a device that is not completely there yet (in my understanding from others)? I mean you can do everything you want to on a Mac. So, why switch to an iPad? Why switch to a device where you can (almost) do everything? Is it the form factor?

I know this is a sensitive subject for many, but I just want to understand

For me it’s lots of things:

While in some ways it’s not there yet - those limitations have forced apps to really excel. I still have not found an equivalent to Drafts on the Mac (though it’s coming of course!).

Why is everyone raving about a device that is not completely there yet (in my understanding from others)? I mean you can do everything you want to on a Mac.

The iPad and iPad Pro are laptop alternatives, not replacements, as Rene Ritchie of iMore repeatedly points out. Going back to the day the iPad was introduced, Steve Jobs referred to it as a 3rd type of computing device besides the phone and the computer. For every person who uses or needs to use a computer there appear to be at least as many who could use a simpler to use/maintain iPad (or even Chromebook in some cases).

So, it might not be a direct replacement for every single thing you’ve come to rely on in the decades that Macs have been around, but for many people its advantages - touch, scanning, Pencil, cellular, powerful processor - make it an ideal device for most (or even all) their work… and play.

For me, it would be the form factor. So much lighter than my 15" 2012 MBP which feels like a beast. I also love the no wait time to get an iOS device up and running.

Unfortunately, it can never replace a laptop for me because I need a laptop/desktop to do things a LOT more efficiently.

For now, I use an iPad Air 2 for consumption and when I have the luxury of getting an iPad Pro, I would love one for those times I don’t need a laptop.

I mean you can do everything you want to on a Mac.

I am on my fourth iPad, and have been using them for work and content creation since day one. What I particularly like is

There are some tasks I stil prefer to do on the iMac, but I maintain that the iPad is the best computer I have ever used.

And oh, grabbing a quick photo of the meeting room whiteboard is pretty clunky with a MacBook

@andreasl Several have responded so I’ll not repeat here. I’m on a 30 day test (30 days exclusive iPad experience: I ditched the Mac for the iPad, and I’ll never go back) so I’m in the process of outlining my experience for my write up. I expect to complete the write up by the end of the year. 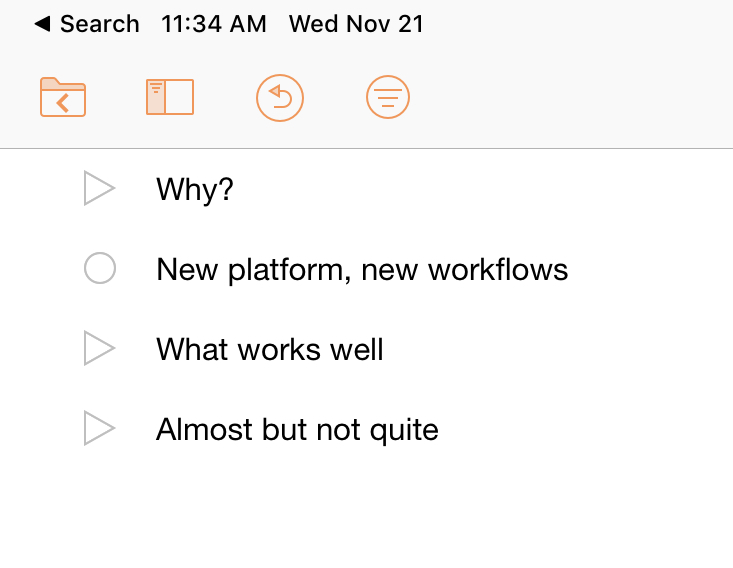 I would call it “Apple’s tablet computer.”

I think “similar functionality” (though not the same functionality) is a perfectly good way to describe iOS and macOS.

If you’re using Pages and Numbers and Office, yes.
If you’re using compute-intensive programs like CAD, data analysis, command line work, etc. then no.
So I personally wouldn’t call them similar, whereas others would.

And speaking of the command line…

I don’t get it (the iPad Pro) @andreasl

That’s fine use your complete solution. Understanding comes from personal use. Your value judgment of incomplete is what you personally know to be true. For orhers the iPad accomplishments their mission.

Features and benefits lists are interesting and perhaps useful. But the knowing this works for me arises, and becomes apparent from use. (Or makes clear it a waste of time, money, and energy. …or returns a sorta conclusion )

@Bmosbacker scheme of use testing resonates with me.

One way of looking, there are others paraphrase P. Wrede

As an scientist, I need workflows that cut down on the amount of time and resources spent on consuming journal articles related to my tradecraft (Neuroscience). Previously, I would print these articles out, read and mark them up with pens and highlighters, then type those annotations into notes on my Mac. All very time consuming and wasteful.

Reading PDFs on my mac was okay, but I get the most cognitive benefit from documents when I can interact directly with them (writing in the margins, highlighting, annotating). I’d tried a stylus on previous iPads, but never found a setup that worked well for me and I would go back the old routine of printing, etc.

iPad Pro with the Pencil solved all of these problems overnight, and cut down considerably on my previous issues, saving me lots of valuable time and a lot of trees!

I’m still killing trees, but figure it’s worth it as my work will help people with disabilities.
Similar to your old system, I print, read, markup, write notes on paper, file everything in a sleeve in a binder using my system, then enter those notes into The Archive, my Zettelkasten software.
This is one area that I don’t want to streamline. Using my current workflow, I manipulate and work with the concepts several times. I also have curated notes to refer to later, rather than marked up PDFs to wade through.

Maybe I will one day, as you apparently did, evolve along with my system into something with fewer steps. At the moment though, this has been a hard-fought battle to find something that leaves residue in my brain

It’s pretty clunky with a 12.9” iPad Pro too, though infinitely more doable

I think the important part, which you alluded to, is the ability process things in a way that make sure you have repeated exposure to the material. Processing it through multiple mediums is certainly effective and it got the job done for me too, and over time it became a lot of work, so I needed/wanted to pare it down to essential processes.

In my case, I have RSI (repetitive strain injury) from using a mouse and trackpad. The touchscreen with the combination of the Apple Pencil feels much more natural for me. There are things that my Mac can do well than my iPad but I’d rather use the iPad for those tasks.

I won’t force other people to switch to the iPad because, for me, it is not a replacement but an alternative to my computer needs.

What I think is that the comments on most sites are a bit strange, at least the ones comparing ipads to laptops (and yes most of that is apple’s own fault)
I think you should compare the device to what it is supposed to do in your life, and judge whether that then fits the brief.

For me the iPad pro is fully there. Ever since 2015 I’ve switched more and more of my workflow to the iPad and have not looked back. I really love this device, and even more since I got my ipad pro 2018. It’s just a joy to use. I think I get more work done on an ipad than on a desktop device, and most of it is due to the experience of the device with iOS and the distraction free environment.

In my workflow the fact that I always have 100% of the tools within an arms length is the game changer. I don’t have to go to a desktop for this, and use my iPad for that; it all happens on the iPad. Sure, I have wishes for iOS, but I have those for MacOS as well. It’s all about which tool makes me most productive and allows me to have the most fun.
And that’s the iPad pro.

And yes, I still have a mac mini doing a few background tasks, but I also had that when I still used a macbook pro. (like automatic file naming, moving and tagging)

For me the iPad Pro is actually nearly there - will be as soon as Pixelmator Photo is released.

So, all in all, I’m just more productive on iOS - the only new workflow I’m still researching is a way to run certain backgrounded automated file tasks, but for now, I’m content with manually running these tasks as Siri Shortcuts

Your right andreasl , why switch to a device that only can be used for simple tasks, this device will never replace a MAC until you have the ability to connect an external drive and share files directly. Even the new ipad pro’s still have a very confusing way of getting your files on the device assuming wifi is not available. If wifi is not available the device is too limited!