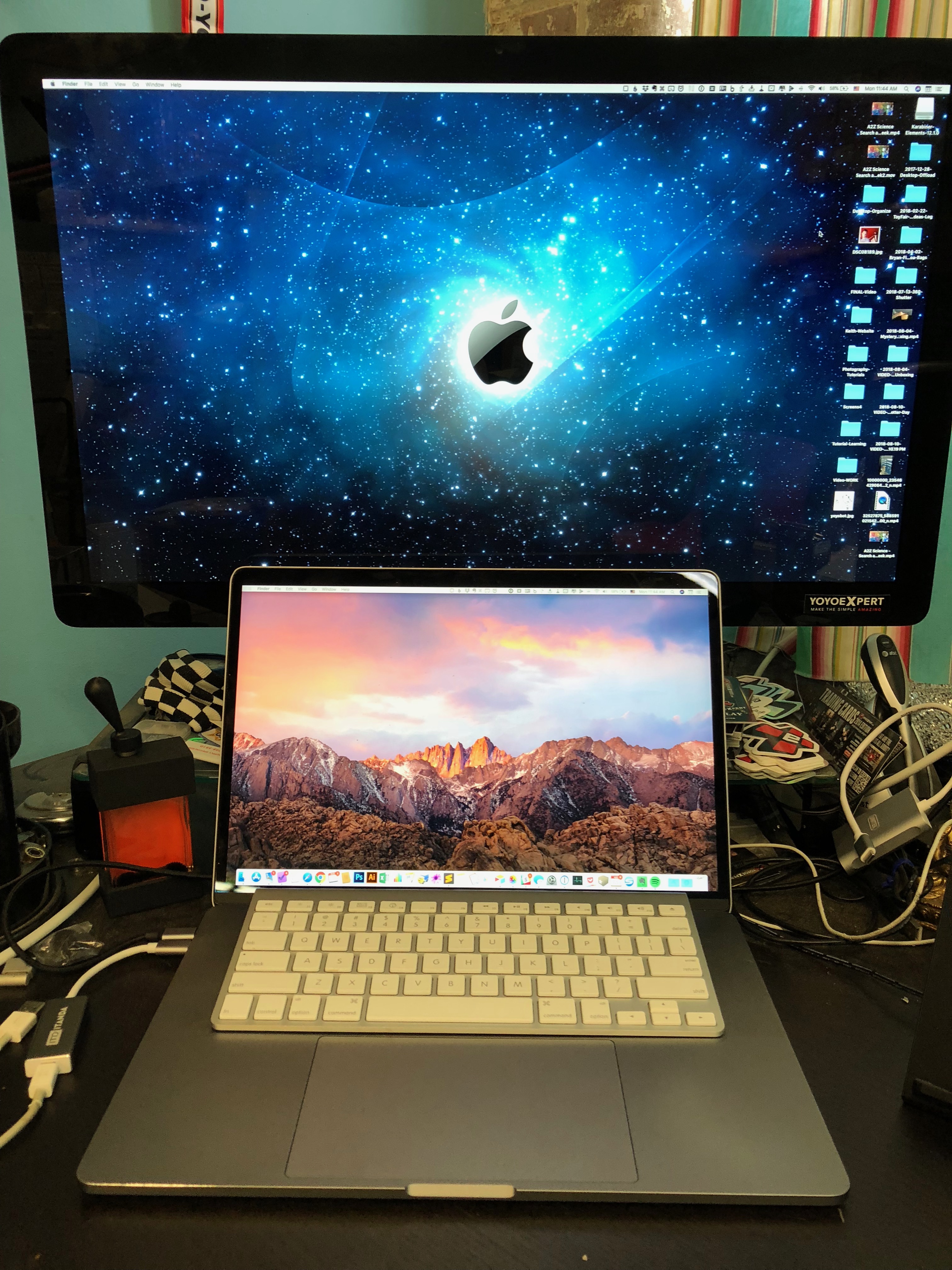 This is how I am using my 2016 Macbook Pro after my keyboard has failed me for the 4th time. I can’t really give it up for the 3 to 5 days right now…

I love this computer - and still hate the keyboard… As more of a road warrior - I don’t have as much of a default station - and ideally I would just use internal keyboard… But this is the first time in two years I have felt like my fingers are doing their job without extra brain power. I really hope Apple creates a Macbook Pro with some real key travel (and hopefully the new 2018 shows increased reliability over time). And they really need to fix the arrow keys - there is no intelligent reason to have the left and right arrow keys the same size as the up and down.

Curious if anyone else here is doing this? I actually found this software that ‘deactivates’ the internal keyboard when my external is connected so I can literally place it right on top of the other keyboard without issues:
https://pqrs.org/osx/karabiner/

Not all the time, but when I am in my home office I have an external keyboard that I use, it’s just too much effort to take everywhere

I did that on my 2008 MBP until,I was able to get th topcsse replaced. It wasn’t too terrible.

Did you ever try a keyboard cover?
I bought a super slim one and taped the edges, and I’ve no problems so far (only had one replacement before doing this 3 months ago or so).

Yeah. I used one for awhile but it still ultimately slows me down. I am much faster on the classic Apple keyboards. The butterfly keyboards are just not working for me (and I have had the 2016 since it was first released). The smart keyboard is better but after going back to this standard keyboard I really wish they had not fixed what wasn’t broken.

Just dropped my 2018 MBP15 off at the Apple Store to have the keyboard replaced. Spacebar is the main issue but I’ve had a few other keys act up despite targeted and regular air blasts. Anecdotally, 3 out of 4 others at the table where I was awaiting a tech were also there for a new MBP keyboard.

The tech was very understanding/apologetic and is trying to get it back to me in 4 days before I leave on a work trip. I’d heard they were turning keyboard replacements around next day if the part is in stock (which it is) but I guess that’s not the case with my store right now. I’d be interested to hear what kind of wait times others are seeing. They told all of us “3-5 days.” If they don’t have mine swapped by my trip, I’ll go get it and he said they’d hold the replacement top case until I can bring it back in after I get back.

Appreciate the store employees working with me to make the situation as painless as possible. This is something I never would’ve thought I’d have to deal with from Apple hardware - reliability has always been one way to justify the price tag - especially since this is the third generation of this keyboard! Whatever business case there was for staying the course with this design, it cannot have outweighed all the ill-will and bad press that is going on so many years now. Argh.

Currently I am so frustrated with the keyboard on my 2018, I have several issues with several keys at this point but the machine is what I use for work, losing a work machine for several days is a complete non starter let alone at the pointy end of the year.

I think Apple should be doing everything possible to ensure these laptops are fixed the same day, Apple says that the keyboards have a low incident rate. Personally I think the rate of failure is drastically under reported, of the 4 MacBook pro’s I have had access to with this keyboard all 4 of them have suffered a keyboard fault of some kind. Of which we have reported zero, because being production machines we can’t suffer the required downtime.

I have to give my Apple store credit for either getting my keyboard swapped in 3 days instead of 5 - that, or for over estimating repair times.

To recap, I took my system in for a 4:15p appointment on Wednesday. Told the tech I needed it for a work trip starting Sunday evening. The tech estimated it would be ready Sun or Mon. Grr.

However, I got notified via email at 4:30p on Saturday that my MBP repair was complete. Them having the part on-hand (top-case; they claimed only one was in stock) probably helped speed things quite a bit.

Still think Apple should be prioritizing these repairs because, from experience, it is not a good situation to be without your work/school laptop for a week.

I encourage anyone else that goes in for a swap to post your repair time so others know what to expect and can maybe schedule it during a vacation or other downtime.

This is why I gave up mine last year, 70 mile drive to Northern Ireland’s only Apple Store… giving it up for 1 week, back when I depended on it for work.

I did it 3 times before trading up to a TouchBar model… why I thought that’d be any different was beyond me! Amazing, beautiful, stunning appliance like machine for doing work on. Such a shame

So I was in the Apple store the other day for a different reason but while you have them you might as well complain, and he told me that if my machine’s had Apple care+ on a business plan they would give me a loaner Mac straight away while the keyboard was repaired.

I proceeded to explain why that was a complete non starter because it takes a day or two to bed in one of these machines to be able to work like you can on your normal one, which basically defeats the point. Was able to give no answer to that.

At least they offered!

Just had mine replaced for the first time, about 40 months after purchase, for free & ready to pick up 28 hours from drop-off. I had had the occasional sticky key but this time the T key really was failing pretty consistently. The replacement keyboard seems to have better travel and feel. Anyway with the flexgate fix done a few months back I’m thinking this machine is good for my purposes for another year or two at least barring any further hardware issues.

Wow just realized they also replaced the battery! 2 of 1000 charge cycles showing in FruitJuice. That’s a nice perk to go along with the new keyboard.