I just realized something about the Apple oriented "press"

The standard is general ignorance. I just came across this

The Studio Display is designed for Graphic Artists not gamers. Above 60hz doesn’t matter, color fidelity matters the most and you certainly do not want a curved screen for Graphic Design.

You often run into people who either do not understand the “intended purpose” of a given product or are willfully ignorant in order to sell some hype.

I noticed years ago a lot of sites wanted to start turning off comments because they claimed they were becoming “too toxic” but I found that most of the toxicity came from commenters reading blatant false information and ripping it to shreds. Hire better writers who understand what they’re writing about and you’ll have less people embarrassing them in the comments.

The Studio Display is designed for Graphic Artists not gamers. Above 60hz doesn’t matter, color fidelity matters the most and you certainly do not want a curved screen for Graphic Design.

See also: “ I bought this hammer, and was devastated to discover that I couldn’t use it to loosen bolts.”

The worst, though, are the reviews on recipe sites that basically read, “ I swapped out all the ingredients for different things, and this dish was horrible. One star.” it’s amazing how often you see stuff like that.

Well, it’s a bit like saying your local online news site or TV station should focus more on economic and foreign policy analysis than covering the latest car crash or the newest exploits of the Kardashians.

As free media, they‘re spending it on the things people are most curious about and likely to click on. And that seems, for most casual readers, something sensational.

Your analogy fails at the part where the podcast is called App Stories.

Ah, but haven’t we all used a hammer at times to loosen bolts?
Just me?

Personally, I’m a fan of escalating within the same broad tool family until a changeover becomes absolutely necessary: 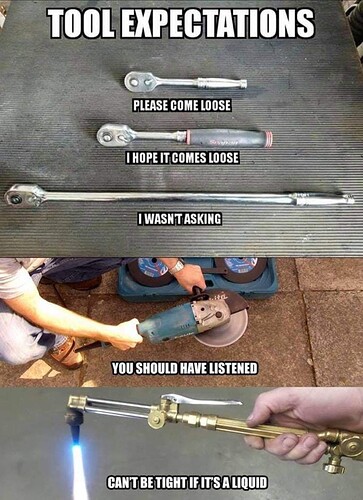 I feel like this is a pretty unfair assessment based on one episode. At this point the rumors are pretty strong that this device is imminent and the episode was what sort of apps and use cases they are expecting from the device. The most recent episodes have been about apps specifically and work flows they are wanting to test.

Since you miss them reviewing apps here is Viticci’s 3500 words reviewing an app. Ivory for Mastodon Review: Tapbots Reborn - MacStories

Others in the thread have shown why in depth app reviews are increasingly a thing of the past due to the amount of time required to test and write with less traffic than more mundane. Additionally a lot of apps that were previously covered in the big publications had provided some sort of press kit and beta access from the developers. Increasingly now when there is a new major update a developer may post a blog and make a social media post and that’s it. I can only assume developers may not be finding the ROI in spending the time to make sure they’re covered in the press either.

I certainly took the sentiment in this thread to be a commentary about the current state of media surrounding Apple.

I think MacStories was mentioned because it’s actually a pretty good website, but it is also going in the same direction as other media. Singled out in a “Even MacStories…” kind of way.

Personally, I don’t think that’s necessarily a fault. But, it is something that people can lament.

Anyway, that’s how I read this.

I specifically said that I was not just pointing a finger at MacStories. It just so happened that it was John’s post hit on something I’d already been thinking about in regards to the larger context.

But, since you brought it up, the Ivory review isn’t the sort of review I’m referring to. There’s no shortage of reviews of that category of app. Not to trivialize the work that goes into creating such an app or the review of it, the point is that it’s a popular kind of app used by a large number of people.

The point I would make and continue to make, in regards to MacStories somewhat specifically…

I think that’s fine for hobby sites that are free or lacking any kind of claim to professional journalism. Sites that sell ads, sell memberships and claim to cover Apple and the Apple ecosystem should make more of an effort at higher level journalism if they expect readers and listeners to support them. I’ve been reading MacStories and listening to their podcasts, etc since the very beginning. As time goes on I have spent far less time giving their content my attention. And in their defense, they frame their paid support system as “Club MacStories” and they seem to have lots of support for the kinds of things they do offer. That’s fantastic and I mean that. It’s working for a lot of folks that want to be a part of a community/club. So, it’s all good. They’re offering a product I’m not interested in…

But, again, back to the larger context…

Over the past years I’ve also unsubscribed from the RSS feeds of most of the Apple websites for the same reason. I suspect I’m not alone. It’s been said above in the thread that these sites are free. No. They are not. They sell ads which means you are the product. Your eyes, your brain, your time and attention on what’s being sold. Ad-supported content is not free content. And certainly, these sites can continue as they have and maybe will continue making plenty of profit. But as a former reader/listener, I feel the loss of the content provided in the late 1990s early 2000s. That was the point of my original post. I bought and paid for subscriptions to MacWorld and other similar Apple oriented magazines because I found that content valuable and worth my time and money.

To phrase it in a positive way: I have learned to appreciate what TidBITS.com is doing (and how they do it) on a constant basis which led me to become a TidBITS Contributor about two years ago (not a big deal). They cover a huge variety of topics and do a very good job without getting lost in the usual app bubble that is being produced via press releases and the always same people talking about the same stuff over and over again.

I have a hard time to consider most blogs “press”. They are blogs. I do not blame them for anything and if they have an audience, they are doing something right.

I do not subscribe to many, exceptions are of course our own @MacSparky, who is doing an excellent job and providing content worth reading to me (so, yes, Labs Supporter), and Jason Snell’s Sixcolors.com and also his articles on Macworld.com (ok, I would consider him press given his background and history).

Christian you inserted a website about mammaries versus tidbits.com. No harm though the website was kind enough to not throw some Tetas in my face. Might want to correct that link

I totally missed that.

I totally missed that.

I use to review software for possible use by my company. I was a business major in school and worked several years in various positions before I ever touched a “personal computer”. So I frequently had an advantage over a technician when it came to recommending software.

IMO someone writing a review for software like DaVinci Resolve should have a decent amount of experience editing video. Perhaps that is one reason we don’t see a lot of reviews outside of ones designed for “personal use”.

I have a hard time to consider most blogs “press”. They are blogs.

I tend to agree. They may provide important information but many are also a form of entertainment. And that’s OK.

I think there is a gradient when it comes to blogs. My blog is certainly a blog! I do try to write quality posts and I put in a good bit of time on some of them. I’ve been writing there for over 10 years and recently found some of my older archived posts go back to 2003, which I haven’t added back in yet. Though I consider myself a serious, knowledgeable user and long-term enthusiast, I’ve never made money by selling my writing, never sold ads or claimed to be a professional writer. I certainly don’t consider myself a journalist! But the sites we’re talking about in this thread are not just simple blogs. At least those that I’ve referenced cross a line into something different that I would categorize as press or journalism. That’s why they get invited to Apple events or get sent hardware to review and that’s why they are able to sell ads and memberships. They employ people and make their living from publishing so it seem to me that they are at least striving for a level of professionalism as publishers.

But the sites we’re talking about in this thread are not just simple blogs.

Some of these sites are the result of people who have found a way to turn their hobby into a job. They are “professional enthusiasts”. I use to occasionally do something similar when I was a photographer. Some like Jason Snell are traditional journalists who are now independents.

Those that Apple finds helpful in amplifying their message occasionally get review units and special briefings. I have no problem with that as long as they remain objective.

Yes, this is a sad truth about our current reality. I will point out that the print magazines MacFormat and MacLife still do product reviews – I know, because they recently reviewed my app, Notenik! (Much to my surprise, I might add.) But of course, we are all so conditioned to getting “breaking news” (and rampant speculation) online, that waiting to read about something in a monthly magazine seems terribly slow and old-fashioned. Part of the problem here is that most app advertising dollars are now spent on ad placement in the Apple App Store(s), and Apple doesn’t pay for affiliate links to its stores, and so it is hard to fund serious app journalism.

I don’t think it really exists anymore. We’ve got lots of podcasts and websites… but jiminy, go to any of the big Apple websites and the content is increasingly just garbage hot takes on the latest rumors, hot deals, and general fluff designed to with the primary purpose of driving affiliate links…

And I thought it was me.

A challenge - a bunch of people made good observations about what is missing in the current state of the world.

I started a new thread asking what would we like them to cover: What would you want Apple Press to write about?

From personal experience, it’s easier to change/evolve towards a positive model, than away from a negative. My current list only contains only 4 comments, make it bigger so they have more ideas to mine.

I agree. Every once in a while there’s an actually helpful article I read, but most of them I just scan the headlines in my RSS feed in Readwise Read and delete.

Except for very rare circumstances, I usually avoid reading any rumors. Many (most?) turn out wrong, so why waste time, brain capacity, and energy thinking about them?

I get almost all my substantive material from MacSparky