Note the Blocks feature too. I haven’t used it but it seems suited to your use case. 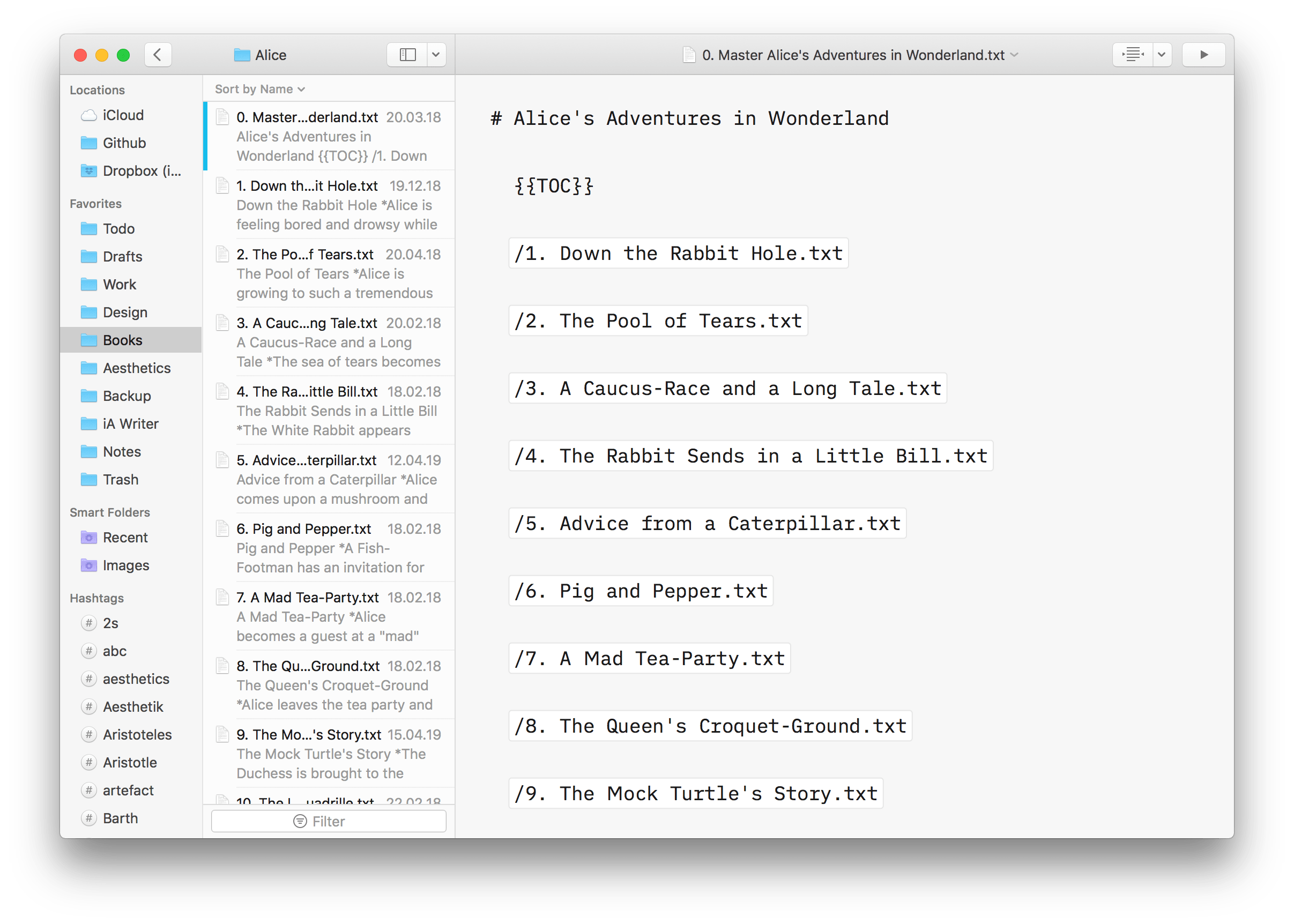 On macOS, simply drag these files into your editor or type their path using the syntax below. On iOS, Tap the "Add Content Block" button…

I like iA’s flavour of markdown and the way it integrates with the file system.

I use Scrivener, Ulysses, and iA Writer. While many reviews make a big deal about the advantages of “sheets” in Ulysses, the ease with which you can rename chapters in the iA Writer UI — thus easily re-ordering them if you sort alphabetically, as noted by others here — renders that mostly irrelevant IMHO. From there, it’s simply a matter of adjusting to the chosen app’s editing UI. You will inevitably be exporting to .docx format for one reason or another and iA Writer does that very nicely, too. Finally — as also noted by others here — keeping all the chapters/scenes/etc. together through iA Writer’s content blocks feature is another great organizational tool for your long-form writing.

@bowsertune has hit upon the essence of writing - getting words down. Presentation of those words is a different task. Unfortunately, applications like Microsoft Word, Libre Office, etc. have led people to conflate the two tasks.

There are several variations of markdown that have been created for different outputs. As with other markdown, LaTeX, etc. the idea (while writing) is to denote what words are (Heading, Subsection,…) rather than how they look. The presentation comes later.

Yes I forgot to mention the content blocks. I create a “master book” file and then have a content block which represents each chapter within that final output document. This way, I have one place to go to proofread the entire book.

I like that idea. Is there a video(s) showing how to use iA Writer?

there’s this support page which covers the basics of the app setup and markdown. there should be some ScreenCastOnline content too.

Thanks, much appreciated. I’m pretty good with markdown but I need to learn more about the app., though it seems pretty simple. Thanks again!

@memex Beat me to it, but yes, this is the best place.

Does anyone know if there is a way to import an OmniOutliner file into iA Writer? Ideally I’d love for each major topic in the outline to become a file in iA Writer. My guess is that this cannot be done but I thought I’d ask.

There seems to be something inelegant about starting document names with numbers and sorting alphabetically. Reminds me of programming in BASIC in the late 1970s when I was in high school. It’s the 21st Century - can’t we do better than that? And indeed Ulysses does do better, with its sheets and the ability to manually order those sheets.

OTOH, I’m remembering how rarely I actually USED that capability in Ulysses, during the years when that was my primary writing tool. So maybe I just need to get over myself and use document numbering on the rare occasion when I’m writing something and need to reorder sections.

Also, if the sections are short - just a paragraph or two - cutting and pasting works.

I don’t think you can do this directly from an OmniOutliner file, but OmniOutliner can export to OPML and that can easily be converted to Markdown for use by IA Writer (e.g. MindNode can import as OPML and export as Markdown).

I hope I’m not the only one on this forum who sometimes feels schizophrenic when it comes to app selection!

For several months I have been wrestling with whether or not to stick with Ulysses and the associated subscription, go back to Scrivener, or consider something like iA Writer. I did not realize it but I can easily import MindNode maps into Scrivener and it automatically creates all of the associated documents.

Because I use MindNode rather extensively for all writing and presentation projects this will work wonderfully for my purposes.

So, with that said I’ve decided to go back and stick with Scrivener. I own the latest versions, it’s powerful, and I don’t have to pay a subscription. Although the interface is a bit complex the good news is that it does have the equivalent of focus mode so it is very much like writing in a plain text editor. I still need to investigate its capacity regarding markdown, although I’m pretty sure it has sufficient capacity there. But at the end of day that is not a showstopper for me.

Thanks to everyone who responded to this thread. It has been most helpful. Perhaps the posted a video on importing MindNode maps will be of help to someone else.

Good choice, Scrivener is a great app. I enjoyed using it, and love how you can have research included and synced with projects. I imagine I’ll also be using it again as it is great for preparing the final manuscript of an academic paper.

I use iThoughtsX for mind maps, which also supports exporting to OPML. The main reason I chose it over MindNode is that it means I can avoid another subscription. If you’re an academic, it only costs $25 and there’s no subscription (contact the author for a discount).

I use iThoughtsX for mind maps, which also supports exporting to OPML.

I like iThoughts but it does not handle notes as elegantly as MindNode. iThoughts treats notes as callouts, which is messy whereas MindNode imbeds notes in the node. I find this to be cleaner, making the viewing of topics and subtopics much better.

I own both iThoughts and Mindnode (but not the latest subscription version). I find iThoughts to be more powerful, and the wireframe layout is better looking to me than Mindnode’s options. Mindnode is easier to use though, and has other niceties like stickers and external display support (and the latest version has keen color-coded tags).

I would probably use iThoughts instead of MindNode because of the power features but for me, I use the notes function a lot in various nodes so the call out approach by iThought is a nonstarter for me, unfortunately.

I am confused by this comment. iThoughts does allow you to attach notes to nodes rather than use call outs. Just tried it on iPad:

The node then shows a little icon indicating it does have a note.

I personally like the look / UI of MindNode better, so I use it on iOS/Mac. But I also own the iOS and Windows versions of iThoughts…I use the Windows one for work. On Windows there is a key combo for opening up the notes box (I don’t have it in front of me, so I don’t recall the exact combo) and it opens up the note pane on the top. I generally keep it closed except when I’m entering a note.

You are right, I just checked. Somehow I missed that. Thanks for the correction. Now I have a dilemma. I prefer MindNode but I don’t want to pay a subscription.

To be totally unhelpful. Stick with Ulysses. I really find it does what I need, I am used to it now and can’t be bothered changing and experimenting. I think it is well worth 40$ a year or whatever it is. I know that isn’t what you are really asking though. I never used or tried iA writer. I tried a lot though and am quite satisfied with Ulysses. I use Pages and Mellel, LaTex and another proprietry specialist app for what I need.