The folders created by apps in iCloud Drive for sync purposes are distinguished (in the Mac Finder) by having folder icons adorned with the relevant app icon, and they sort ahead of “ordinary” folders (e.g. in alphabetical order, for me at least, my “Soulver” and “TextEdit” folders appear ahead of “Desktop” and “Documents”

I have one app’s iCloud Drive folder that appears to have lost its “special” status: it has a generic folder icon and sorts with ordinary folders. I think this may relate to the fact that I have used apps other than the “owning” app to edit contained files (they’re just generic PDFs). It’s hardly a deal-breaker but does anyone know how to “bless” it again?

Not that this will shed light on your question, but all of my iCloud Drive folders sort based on my selection (alphabetical, date added, etc). Here is a photo of folders sorted alphabetical. I am curious why your drive has different behavior.

Thanks Nick – you’ve got me one step nearer a solution in that I checked (doh!) and found that actually I was sorted by Kind rather than Name, and see that the “blessed” folders show “App Library” as their Kind whereas the rogue folder I mentioned has reverted to just “Folder”. So I guess the question is can I, should I, try to convert it back into an “App Library”?

Is the App in question one of the Apps synced to iCloud?

Make sure you have the folder in question backed up before you change anything.

I would really like to have an option where we could put all of those ‘special icon’ folders into a different location - like into a folder called “Apps”. That root iCloud folder can get super cluttered with all these folders as more apps are added to the Mac. Tried moving one and got the ‘do not move’ icon when hovering one of them over another folder.

They already are in a different location. All the so-called “blessed” folders are actually in folder locations that begin /Users/username/Library/Mobile Documents/. Apple likes to play games with us and keep things “simple” in the Finder. You can see this by making a special setting from a terminal prompt:

Apple likes to play games with us and keep things “simple” in the Finder. You can see this by making a special setting from a terminal prompt:

I don’t understand what to do with this item? What is the function/purpose of the line you noted?

I navigated to the “Mobile Documents” folder that you previously noted and did see the same set of folders as in iCloud directory. I pasted the ‘terminal prompt’ you suggested into Terminal but nothing seemed to happen?

After executing the terminal command, the top of your Finder windows should show the true path to iCloud files rather than Apple’s fictitious iCloud path. (The true path is so long you have to hover your mouse over it to see the entire string.)

I’m on macOS Monterey and see my change immediately after the terminal command and selecting another iCloud folder in the Finder. But if you are not seeing any changes you could try restarting the Finder.

Now I see the change to the Finder header and it is showing the ‘absolute’ path now. I was not looking there before so didn’t see it. How do I reverse it if I want to go back to previous?

My original question was that I wanted to do was to see if I could put all the ‘icon’ folders into a different folder within that directory just to clean up the iCloud area. I’m assuming there is no way to do that? 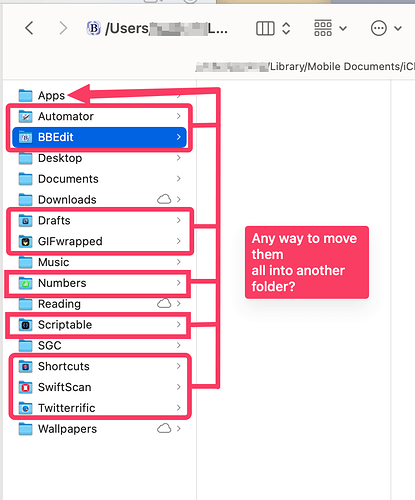 No you are stuck with Apple’s (hidden) paths.

How do I reverse it if I want to go back to previous?

Got it re reversing Terminal command. Thank you!

And bummer on not being able to move the folders.

They already are in a different location. All the so-called “blessed” folders are actually in folder locations that begin /Users/username/Library/Mobile Documents/. Apple likes to play games with us and keep things “simple” in the Finder. You can see this by making a special setting from a terminal prompt:

Ah. Didn’t know that and I suspect that’s at the root of my problem. The app in question is a sheet music app whose iCloud Drive folder contains PDFs. I had (naively?) edited some of these in other apps (both on iPad and Mac) accessing the folder in its “apparent” location using the Files app on iPad. I suspect in saving things somehow the folder has moved? I’ll start over…

On iOS for iPhone and iPad, the file structure is different than on Mac and mostly invisible to you. Deliberate design of iOS. The Files app will correctly find the file under the “iCloud Drive” icon. As will with Finder on Mac.

In Finder Menu: Settings → Tab: Sidebar, enable showing the iCloud icon. Yes, it really points to the “buried” location @karlnyhus pointed out. You can use either.