I'm going to a conference without my Macbook today. Pray for me

I’m a tech journalist. Been doing it for 30 years and during all that time a big part of the job has been going to tech conferences around the US, sitting in the audience on sessions and writing articles about what people say, and also doing interviews with vendors and companies and writing about what they say.

For the first 10 years or so I kept my laptop in the hotel room and worked there. But for the last 20 years, I’ve walked around all day with a laptop bag hanging from my shoulder. Because 20 years ago there emerged this thing called the World Wide Web and now I was no longer writing for weekly and biweekly newspapers. I was writing for a medium that published continuously. I needed to be able to stop and write during the day.

And those laptop bags, they start out the day not weighing much but by the end of the day it’s like carrying a refrigerator in a shoulder bag.

Yesterday I did something I’ve been thinking about for a while. An experiment. Left the MacBook in my computer bag and worked on my iPad all day.

And it worked great. I only needed the MacBook once, to quickly cut-and-paste some boilerplate text that lives in a repository that does not sync to the iPad.

Today I take the big plunge. I am leaving my hotel room shortly and will lock the MacBook Pro in the safe and just work on the iPad all day.

The iPad, btw, is a 2018 6th gen standard model. Not a pro. I am at this moment skeptical that anybody actually NEEDS a Pro model, other than some folks who work in visual fields such as the arts. But of course I lust for the Pro anyway.

Keyboard is a Microsoft portable that has served me well for casual use for a few years, but which is starting to get a little flaky, alas. No big deal – plenty of keyboards out there, including one for a mere $30 that people seem to like.

I think the biggest hassle for me would be trying to sit in a conference room chair without a table or desk. A laptop is a lot easier than a separate keyboard & screen under those conditions.

The iPad, btw, is a 2018 6th gen standard model. Not a pro. I am at this moment skeptical that anybody actually NEEDS a Pro model, other than some folks who work in visual fields such as the arts. But of course I lust for the Pro anyway.

This feels like a quote directly from my brain. I have an original 12.9 iPad Pro, and it works great (sans iOS 13 latency glitch issues) but maaaaan do I want an updated Pro, even when I know it’s more than what I need it for (PDF reading and note taking).

I think where the 12” form factor really proves itself is in multi window scenarios. Much of my work is design and layout for print and website work. I constantly use 2 windows for this and often wish I had an even bigger screen. In fact, I often will use my iPad Air 2 as a screen from which I can reference a client document as I design and layout on the Pro. It’s got more than enough processing power, it’s the bigger screen I really need. If Apple offered a 15” I’d buy it. I also look forward to being able to use a second screen some day (as a second screen and not just mirroring).

One thing I’d suggest for anyone working away from a desk would be an attached keyboard folio/case of some kind. The 2018 Keyboard Folio works great in the lap, much better than the previous. Of course Brydge offers these too.

That’s what’s great about the Microsoft keyboard. It has a slot at the top into which you can slide the iPad. It works fine on the lap.

Sounds like you’re one of those folks who works in a visual field and likely finds the Pro useful, for the big screen size and better display.

Sow how did it go? What challenges did you run into, how did you handle them?

My day without a MacBook went spectacularly well. I encountered zero significant challenges. In addition to being more comfortable, I was just as productive as I would have been on the MacBook.

Unplanned bonus: Battery life was not a problem. When I’m on the MacBook at a conference my motto is ABC – Always Be Charging. Whereas I was on the iPad all day, didn’t plug it in once, and finished the night with nearly a 30% charge.

I neglected to say earlier that one of the important things I do at a conference is type notes in realtime of presentations and interviews. So I was working on the iPad much of the day, even when I was not writing.

When I said earlier my Microsoft keyboard was getting flaky, I was doing it an injustice. It was my fingers navigating the unfamiliar keys. It’s still working like a champ, although it is a little quirky. I highly recommend it – if you can find it for a reasonable price. I think it’s been discontinued and the remaining units are ridiculously expensive. 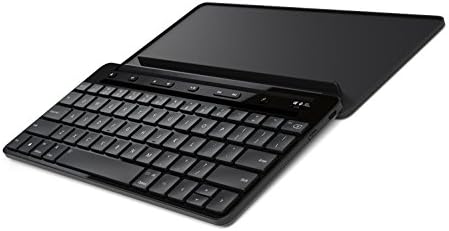 The touch of the keys is nice and the iPad props up in a slot in front of the keyboard. You can easily lift the iPad and work it with two hands, if that is your preference. And you can most definitely work with the iPad on your lap.

That’s me on the right:

Spotted at #MWC19: @MitchWagner interviewing @Cisco's @jonathandavidsn about networks and stuff. I only share this to point out how loudly Mitch types. We walked by his interview and thought we heard it raining. https://t.co/sYbPCrB76R

The one thing that gave me pause is that I wanted to do an article with six or eight photos embedded. That would be hairy even on a laptop. Lots and lots of clicking. Our company CMS is old and doesn’t handle embedded photos easily. Rather than attempt to do the article on my iPad I opted to have dinner and drink beer instead.

All in all, this has been an extremely successful experiment and I look forward to being laptop-free during the day when I’m traveling on business.

And I can see now why people prefer the iPad as a work environment. It’s so darn simple.

Glowing review for iPad productivity! I’m glad your day got on so powerfully!

One liability of my new resolve to leave the laptop in my hotel room when traveling: That leaves me very few opportunities to show off my laptop stickers. It’s been more than two months and I’ve been to several conferences since. The experiment is over — this is just how I work now. The MacBook Pro stays in the hotel room during the day, and I work on the iPad during the day.

I upgraded my keyboard to a Brydge. It’s really nice. The benefit is that it turns your iPad into something resembling a MacBook.

That is also the liability for the Brydge. Sometimes you just want to hold the iPad in your hands, and the Brydge requires a bit of effort to attach and remove. Not a lot, but enough to interrupt flow.

OTOH, typing on the Brydge is a dream, and it’s the same muscle memory as the MacBook. No more mashing the wrong key because you’re used to a different keyboard.

Still a work in progress: Finding note-taking and writing apps that let me write and access notes and write articles on both the iPad and Mac. I’ve tried Evernote, Bear, DevonThink, Keep it, Ulysses and Notebooks. I loved elements of all of those but ultimately found then unusable. I downloaded notion.so and Agenda and said nope to both before I even tried them.

My current solution is just to use the Finder on the Mac to store documents. On the Mac, which is still my primary work environment, I take notes in rich text using Nisus Writer Express ($20 when I bought it), and write using Multimarkdown Composer. On the iPad, I write using 1Writer, which is … OK.

On the iPad, I was struggling to find a rich text editor that was guaranteed to be reliable on the iPad — I did not have the luxury of experimenting with some janky Indy software that might crash and delete all my notes. This morning, I thought: I’d be happy with a rich text editor that would sync to the Mac and I could either export to RTF or just cut-and-paste. And then I thought: How about the Notes app? And I used that and it was nice.

for the perfect note-taking and filing system. But what I’m using works fine for now.

One thing I’m still working on is finding a way to process text before uploading articles to our CMS. I need something that will automatically convert smart punctuation to the dumb version, and make links into target=new. I use TextSoap for that on the Mac, and I could also use Keyboard Maestro, BBEdit — plenty of options. I haven’t found even a single option on the iPad, unless I script something myself, and I do not know how to script the least little bit.