My son now wants the spinning drive replaced with an SSD, so we bought a OWC Accelsior S, which is unformatted.

I had completely forgotten that the updated firmware meant there are no boot options. So now I cannot ⌘ + ⌥ + r on boot to access recovery.

I also don’t seem to be able to download a copy of 10.14.6 to install on the SSD. The App Store prevents me from downloading it on my intel MacBook Pro and I found a terminal command on 512 pixels which was supposed to do the same thing, but it also errors.

Does anyone have any suggestions on how to proceed? I am completely stuck.

Could you use Carbon Copy Cloner to make a bootable backup to the SSD, then disconnect the spinning drive?

Thanks JohnAtl, I have never used Carbon Copy Cloner. Would the SSD first need to be formatted?

No it doesn’t. CCC or Super Duper (or others) will handle the format on the destination SSD

Come to think of it, after creating the bootable drive with CCC, you might be able to just select the SSD as the startup drive in System Preferences, and be able to leave it connected for other use.

I had to install CCC5 as this Mac is on Mojave. I have selected the HDD as the source but the OWC SSD doesn’t show as a destination 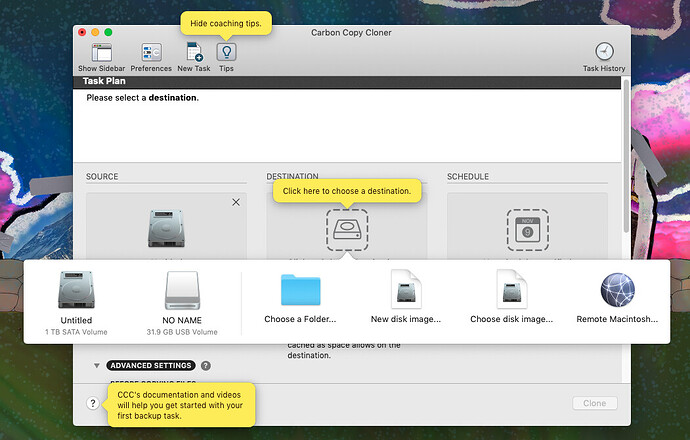 How much of the 1TB of the HDD are in use?
If the “NoName” is the SSD, there are only 31,9 GB available, which would most probably not enough, to clone the drive.

“NoName” is not the SSD, it’s an SD card. The HDD has used 951Gb, the SSD is 512Gb but I only want to run the OS and applications from that. The HDD will be kept to store media files (my son is a videographer)

So, the SSD is not visible in your System right wow, right?
Try the DiskUtility and have a Look, whether the SSD is visible there.
It might be, that the drive is Show grayed out, in this case it has to be activated first.

It shows in Disk Utility as an uninitialised external drive

I have currently no CCC available, so I could not say, if you have to use a special function there, to get, what you want, but I am not sure, that you will get a bootable version of a drive, if you just copy the OS.
But, if CCC is really able to work this way, you would have to initialize the drive first, to make it available within the CCC-Menue.

I formatted the disk with disk utility as APFS with a GUID partition map, it now shows as a location in the finder which is great progress!

I found an old Catalina installer and tried to install that on the SSD and it said that it could not be installed on that volume. This confuses me as 10.13 had support for APFS

HFS+ would be the next best option…

Is that the “Mac OS Extended (Journaled)” option?

How to Install macOS on a New SSD

Installing an SSD can help give an older computer a new lease of life. If you own a Mac and want to install macOS on a new SSD, follow this guide.

Cmd+Option+R is not a possibility for me but thanks

Have you read this article?

It’s a problem if you need to reinstall the operating system from scratch and the Recovery partition is missing or for some reason you can’t access. A problem, but luckily there are solutions available. 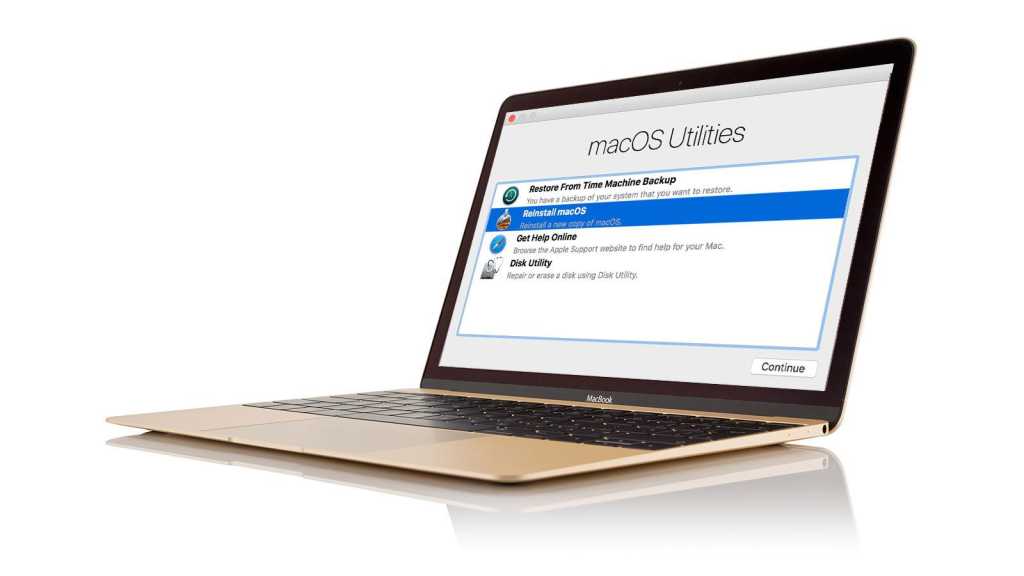 How to reinstall macOS if Recovery won't work

What to do if Mac Internet Recovery won't work or you can't boot into Mac recovery mode. Plus how to enter Recovery on an M1 Mac.

I don’t think any of those options will work. Anything which relies on entering any kind of mode upon boot is not an option for me. When I updated the boot rom to 144.0.0.0.0 I lost the boot time options stuff such as recovery and internet recovery

I think you are too quick to say none of these options will work. Did you read the entire article? The author covers every practical way to do what you are trying to do. You may need to borrow or purchase some old macOS CDROMs and then upgrade from there (as the article suggests when all else fails).

OK, maybe you could find a useful information within the following sites. It seems, that you could get into the Boot menu by different ways, but it depends on the connector of your monitor, the time you have to wait and/or some terminal usage infront of that.

How to use a Mac Pro 5,1 without a boot screen? workarounds?

Hi Could someone please explain alternative ways to get around not having a boot screen with a Mac Pro 5,1 when a user installs a (non-flashed)metal capable graphics card in a Mac Pro? Thanks KG 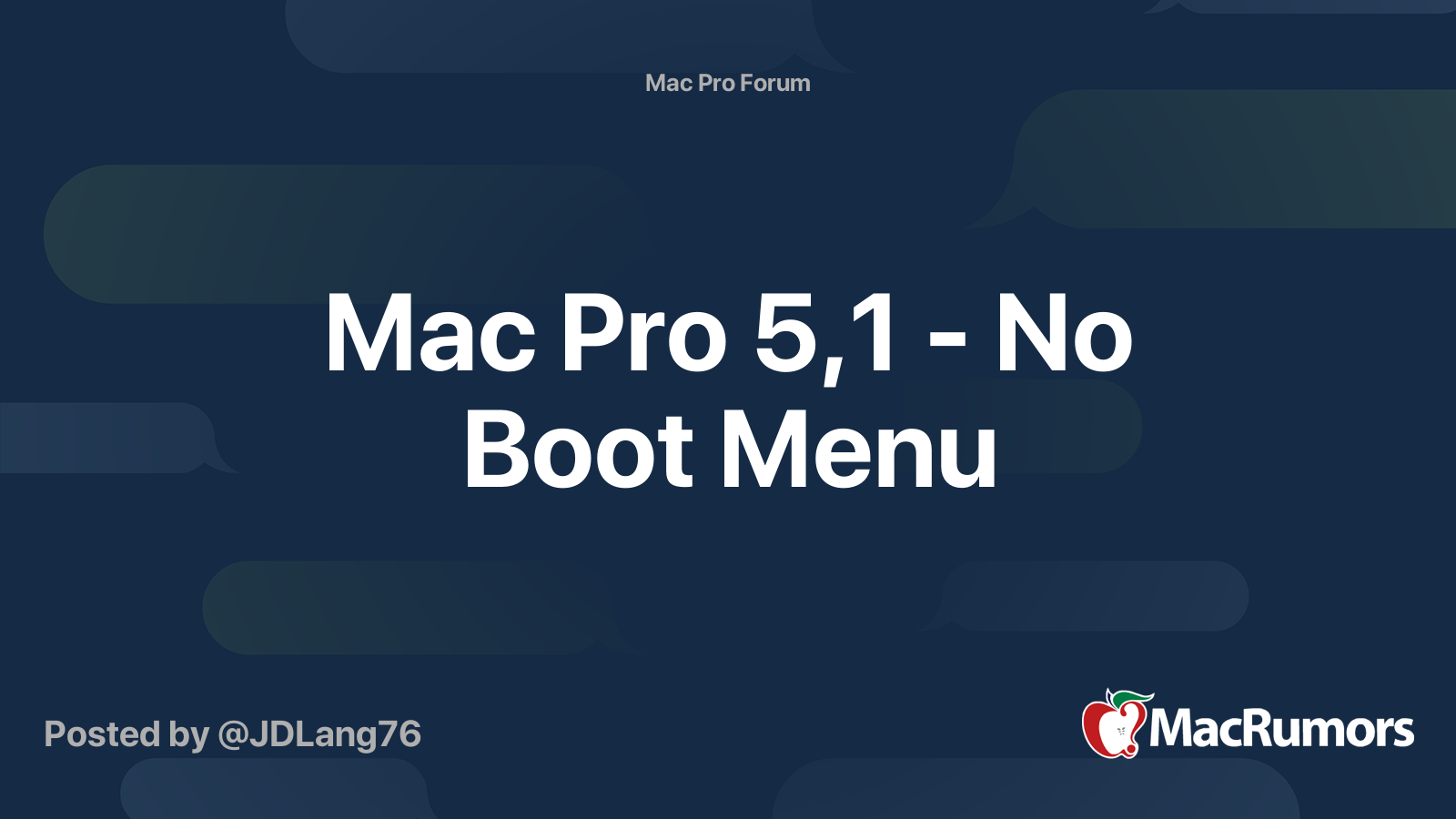 2010 running latest 144 firmware. Stock Redeon GPU. No other PCI cards. One SATA SSD with High Sierra. Have reset SMC and NVRAM. Using wired Apple keyboard. It will not show boot menu when I hold down the option key. It boots to High Sierra as if I...