Am I the only bothered by the fact that someone at Apple thought it would be a good idea to switch the keyboard selection and symbol keys? I can barely use the keyboard because after years of using it to type, I am now constantly typing the wrong keys. I understand the reasoning; Apple wanted the iOS 12 keyboard to match the iPhone and the Smart Cover. But it’s now impossible to type. I tried Google’s keyboard, which retains the original layout, but the predictive typing is terrible, so that keyboard is actually worse.

Hmm, I was making mistakes for a while, then adjusted and I’m fine.
I thought it was me being silly, but your explanation makes sense too, I hadn’t spotted it.

I can recommend the SwiftKey keyboarrd - I’ve been using it for years.
I don’t use the swipe keys, but the predictions are fantastic - even in Danish

The undo button on the numeric keyboard layer is the bane of my existence.
(Slightly exaggerated, but only slightly.)
Does SwiftKey spy on you? (collect your data?)

I just tried it. My fingers aren’t used to it and I just kept making mistakes. Plus, I don’t trust giving third party keyboards rights to my iPad.

It gathers data on your use, and way of typing, and moves the key activation zones so you have an easier time hitting the keys, but it doesn’t send the info anywhere if you don’t allow it to.

I swear, rearranging keys slightly every iOS version seems to be an Apple hobby,

. This one was subtle enough that the first day I upgraded I thought I’d lost my mind.

As always with these things, the best answer for me at least was just to pretend it wasn’t happening and keep typing. My brain seems to have reset itself after a week. Frustrating while it’s happening, though.

I’m finding this infuriating and It’s slowed down my typing a lot. I just hope my mind adjusts to the changes soon.

I‘m a little confused: On my old phone I remember having extra keys when typing in landscape mode (arrow keys). Those are gone now with my Xs Max and iOS 12. Also I think I remember that on the plussized phones there was supposed to be an extra key for pasting. I don’t have such a key either, landscape nor portrait mode. I didn’t find a setting for this either.

I still have a 7 Plus for work and just got an XS Max for personal. Both have lost the paste, copy, undo button and extra keys on the side of the keyboard in landscape with iOS 12. It’s frustrating because there is a lot of space on the 7 Plus, but the XS Max has a ridiculous amount of unused space on the sides.

Thanks, that explains my confusion. Actually having copy&paste buttons was one of the things I was especially looking forward to. I hope this will come back!

I don’t know if anyone will think this is clever or funny but for what it’s worth, I did send this: 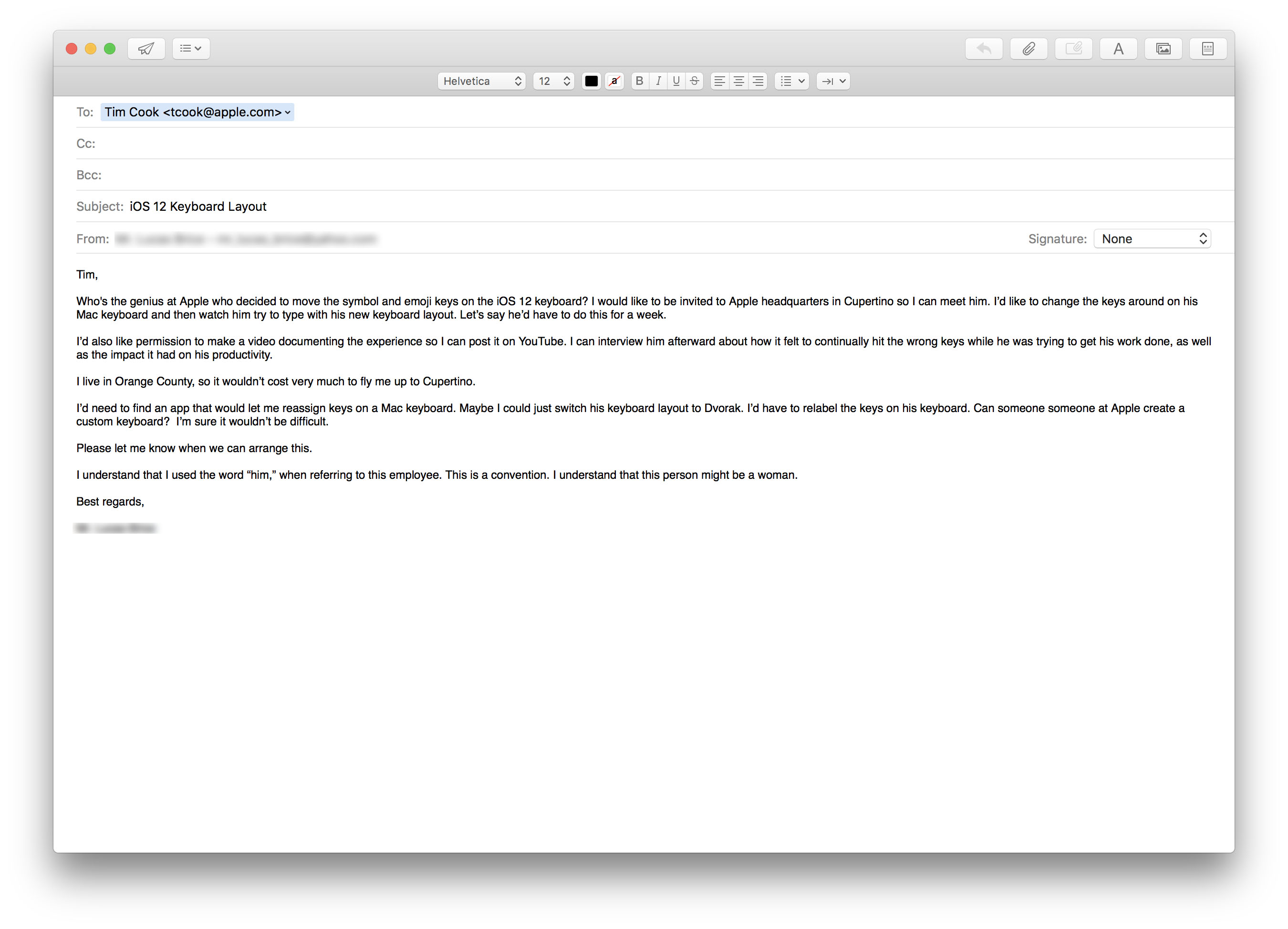 Perhaps, but unless you are a computer security professional, you can’t know the full extent of the data it collects. When you grant it full permission, it has access to everything.

Yes, every single time I try to enter a number or symbol, my muscle memory always sends me into keyboard switching hell. Every time. I just haven’t been able to adapt.

Let us know if you get a reply.

I agree. It is infuriating!

Yep, definitely seeing this… but only on the iPad.

Yes! That undo button AND the swapped number and “world” button are highly irritating being in the wrong places now.

Also with iOS12 I am wondering if there isn’t something a bit quirky about iPad Mail. Just lost a long email I had spent an hour or so working on complete with pictures, etc. The first hint that there were issues was one paragraph had a lot of accents and various symbols over the words. Then I moved the cursor down and tried to do some editing. Then I started seeing some “holes” in the text come up before the pictures. I quick tried to save the document by “cancel” “Save draft” (instead of delete draft), and exited Mail hoping to come back. But the letter is gone. And restarted and came back. Nope letter gone.

That has NEVER happened to me before. I found it rather unnerving.

Ugh. That’s annoying.
I resorted to occasionally using Select All, then Copy if I’m working on a lot of text on my iPad. That way, at least it’s on the clipboard and possibly recoverable. That’s a definite Windows behavior, and shouldn’t have to do that on any Apple devices.

iOS 12.0.1 includes a small design change on the iPad too. With the iOS 12 update, the ‘.?123’ key was moved. With version 12.0.1, that key has been restored to its previous position on the software keyboard.