Arghs. I’ve convinced myself that an iPad pro with apple pencil would be great for reading journal papers, taking notes and doing some digital calligraphy/art. I love the new pencil a whole lot more (the idea of having a pencil sticking out while charging has always been a no no for me, I’m convinced I would break the pencil in no time!) so I’m only considering the latest and greatest.

Alas, it’s pretty darn expensive and a huge chunk of my salary so I need some courage here.

Do you think there will be a new iPad pro later this year? I’m in no real hurry to get the ipad… So I can wait. But I don’t want to wait indefinitely either. What are the chances of a new iPad pro this year and should I wait or should I get it now? Initially I thought the 2018 version was released in Sept but turns out it came on in November… That kinda makes it a bit less likely for a September update?

On one hand I want to click buy now but on the other… It’s a big chunk of cash. Any thoughts or rumors?

I think they’ll spec bump it this fall, but I don’t think the bump will in any way be worth waiting six months for for anyone who actually needs an iPad Pro.
The only x-factor would be if they added something that’s necessary for a new iOS 13 feature, but I don’t know what that would be.

If you do not have much money to spare, do not buy the iPad Pro unless you will use it for work and the machine will pay for itself. I think the new iPad Air is great for your intended usage and its cheaper

And if there will be an update to iPad Pro this year, it will be just a minor one, since it is too soon to change the design and it already has way more power than it needs. They will maybe improve the GPU because of Apple Arcade.

The iPad Pro is pretty much perfect for the use cases you mention. Except for the calligraphy/art, those are a big part of how I use it.

As to charging the Pencil: I agree that having it stick out from the iPad looks silly and risks breakage. I almost never charge it that way, though. I use a Belkin case/stand, and just charge it overnight each night.

Given that the new iPad Air has a much lower entry price than the Pro and that charging the Pencil may be less of an issue than you initially thought, you might find the Air does what you want/need, for $300 less.

That said, if you can afford it, the current Pros are probably more future-proof, and the likely lifespan of the iPad is also a consideration worth factoring in.

I think i’ll just go for it! I do like the new pencil design so much better, and I can afford it (still is painful on the wallet, I don’t make big purchases regularly!). I’m planning to keep my iPad for a long time to come. My iPhone 6s lasted me four years before I finally replaced it because of the poor battery life (still using it for gaming now). I intend for the iPad to last minimum four years too. I do tend to keep my devices working for a while so I guess it’s worth the investment! It’ll be my first iPad… Can’t wait!

I was faced with same decision in january. Went with 12.9 pro after previously always been at 9.7/10.5. Absolutely love the new iPad as well as larger size. Very glad I made the jump.

The Pro is ridiculously overpowered for a tablet, so I would not hesitate to buy one now rather than waiting. I upgraded in the fall from a 10.5” Pro and frankly don’t notice the extra horsepower at all (that is to say that iPads haven’t been constrained by CPU/GPU performance for quite a while, at least not for the things that I do).

Reasons to choose a Pro:

As will all things, your experience may be different than mine, but for me the new Pros is completely worth the extra expense, and I would have zero hesitation about buying one now.

Unless OS 13 makes use of all the power the new Pros have, it’s hard to justify.

I really love my 2018 12.9” iPad Pro. I’d say if you’ve decided the Pro is right for you and you can buy one right now, go ahead and get it. I doubt the Pro will be updated this year, and even if it is the current Pro is a great device and less than 6 months old. Go for it! 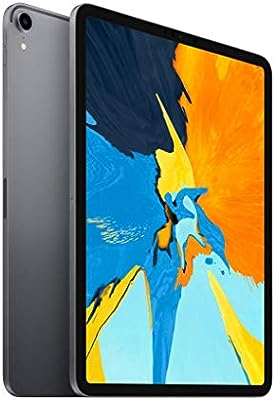 Thanks all for the feedback! I did it, hit the buy button. Will pick it up in store next Thursday. Got the exact same mode as my sister did a few months back - 12.9 inch with 256gb and just the wifi. Also got the pencil and keyboard. It costs over 10 bucks to add a device to my mobile plan where I’m from… I don’t travel for work and I only forsee myself using the iPad at home or at work, both places which I have wifi to connect to. I’m not a “do work at Starbucks” sort of person so either way I think I’m probably not going to regret that decision.

Bank account numbers aside, I’m really looking forward to getting my iPad! Getting an iPad has been on my mind for years and I finally decided to spring for it with my bonus. I’ll probably be a little jealous when specs bump happen this year, but I should have been using my iPad for a good few months by then. Here’s hoping this investment will last me half a decade or more!

Hey, folks -
I may be able to make a deal on a very gently used 11" Pro (Space gray, 256 GB, cellular, AppleCare through Fall 2020), and throw in smart cover and smart keyboard, shipped in the US. I’m thinking, $800. (Absolutely nothing wrong with it, I just discovered through use that it’s not an ideal size for me.)

I am reluctant to sell it to a stranger on the internet, but since @RosemaryOrchard has personally vouched for every single person in this forum, I figured, I’m willing to take a chance.

Let me know if it gets anyone off the fence about buying one.