I wish Apple finds a way to keep icons ordered instead of making a mess. Something is surprising to me, when Apple is keen on details. 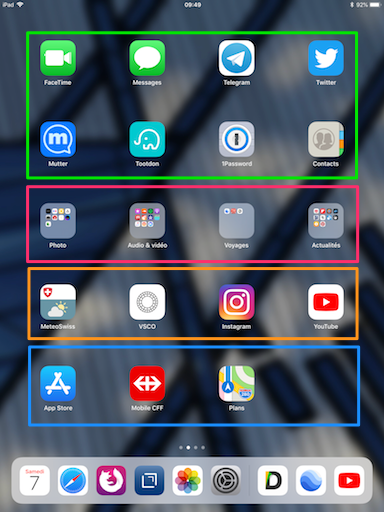 I added my logical app grouping. The pink area is supposed to be a kind of separation between the upper and lower part of the screen.

However I have a second screen with mostly horizontal based app, As I’m using ma ipad on a stand with an external keyboard, mostly email and office writing. Horizontal screen is better than vertical. But… in this case the first screen become a mess… as shown below 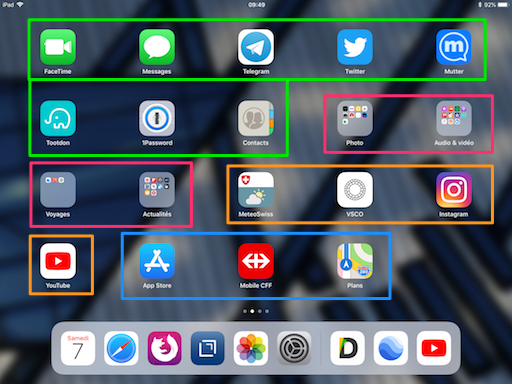 And this is really annoying

the “separating” folders are seperating no more for example… I usually visually locate icons and they just moved elsewhere. (ie, I could alsmost tap the right app icon without looking at it, knowing it’s position).

I agree that SpringBoard is weird when managing icons that way, but I don’t remember anything about rearranging icons on iOS from this years’s WWDC, so maybe next year

I long ago gave up trying to visually locate icons. I use multitasking switcher and siri app suggestions (on phone, and it often has guessed which app you want) or the dock (on iPad) and search for everything else. If I could make all the home screen icons go away I would.

I wish Apple finds a way to keep icons ordered instead of making a mess. Something is surprising to me, when Apple is keen on details.

But isn’t it just maintining the sequential order you put them in?

They are arranged in a grid. You rotate it and the same sequence is applied to the rotated grid. For me personally, that seems perfectly logical … but I’m more a code person than a UI design person.

What is it you would have Apple do the grid laout that would be better?

Whist it does incur an extra tap, if you have folders, I believe they always apply a square grid so the layout is constant regardless of device orientation. Which is always an option to consider if you are looking for consitent layout. Since you have 4 groups and a minimum of 4 icons across, then you would have the consistency of location for the folders. I wouldn’t call this ideal, but it does provide an orientation independent layout.

It would be nice to have the option to maintain the positions of the icons and just rotate them in place wouldn’t it? It would mean any space you left without an icon would look a bit weird in one orientation but could be made to feel less weird if Apple didn’t try to bunch the icons up without any gaps at all. Some flavours of Android let you put icons wherever you like, including leaving gaps, like your desktop can be used on macOS.

Thanks. That makes sense in terms of an alternative approach and positioning option.

I wonder if that is what @olivier was getting at? He was talking about icons moving around and this seems like they are still doing that to me as there is a switch in orientation such that the icon in the top left of the screen would be found in top right after a 90 degree turn clockwise, and the top right would be bottom right.

Switcher, Siri suggestions are 2 areas I didn’t enter yet deeply. May I should “let it go” and have more confidence on Siri to suggests my next app depending of task I’m doing ^^ Is Siri good for you at suggesting ? I’m curious.

I wrote this post after looking at yours, actually

Your screen inspire me to may be change

You have a point, the icons are displayed sequentially, and it seems this doesn’t wok well for me. I like to group apps either per category (ie all photo app together), or by use (these apps for this company, these other for another company). I’m not sayin this grouping is the best.
Visually I noticed I remember better where app are located on the screen (ie photo app are all located in the left of the screen. If I sort them sequentially, I need to look at all of them from the top left to find where my app is, as the position on the screen changes.

I didn’t want to influence any of you with a suggestion of mine. May be you have a way I didn’t consider. However here is my suggestion : when you rotate the screen, all app icon should also rorate but keeping the same location. Just like is you had a board with keys hanging. You rotate the board, the keys are not relocating, their just keeys their place but hang differently

Actually I like the android way to let the use place the icons where ever he/she wants.

I wish a designer could explain what is the benefit of aligning sequencially the icons, I would may be better get with it ?

However here is my suggestion : when you rotate the screen, all app icon should also rorate but keeping the same location. Just like is you had a board with keys hanging. You rotate the board, the keys are not relocating, their just keeys their place but hang differently

Got it. Thanks for clarifying

That matches with what @sdjmchattie suggested above. Just keep in mind that as per my note about this will actually change where you look for something. An icon located top right will a quarter turn and no longer be top right. You’ll still end up with a cognitive switch between the two orientations and the two locations. But, it might be a little easier as the top right icon would always be a corner icon rather than ‘slipping’ forward or back along the ordered list of icons; and similarly for other positions.

Because of iPad multitasking, a lot of people are storing apps in folders on their dock, so if you have the room to spare, who knows, maybe folders would actually turn out to be an ideal solution for you? 🤷

Agree, that with rortating icons, they are also “moving” when you rotate de ipad. But at least they stay at their location the whole time. Just like you write on a pice of paper, your text follows the paper rotation

The text is not fluid. Yes,m that matches @sdjmchattie suggestions.

My current use is to have the most used apps available on the springboard (so they are available in one click), the others are sorted in “themed” folder. for now I could get 2 screen on my springboard. Without reading, just with the shape and color of the app icons, I can tap easily the app I want. The one in folders are more difficult to get (need to read the folder first), but as they are secondary app, that’s fine.
I tried a long time ago a 100% folder springboard, but I had to take lot of time to look for “where I put this app”

I think it’s fair to say finding icons is a chore on all systems. I have learnt more recently that if I’ve spent more than a few seconds looking for the icon where I thought it was, swipe down on the centre of the screen and type the first few characters of the app to launch it more quickly.

I hardly ever use anything except Spotlight to launch apps on my MacBook so why not use it on iOS as well?

I never considered Spotlight to look for Apps (either on MacOs or iOS). May be I should try too… Thanks for mentiioning