Hey guys.
For a couple months now I have been making a concerted effort to move most of my workflows and work to iPad only. The reason is to see if I can justify getting rid of my Macbook (getting long in the tooth) and my standard iPad, and go Ipad only, on a Pro.
I dont want to spend the money on a Pro and find a still need a Mac for those 10% of things. Hence my desire to move over now onto iPad only.

I am mostly doing just fine. Even the light audio and video work I occasionally do, I can do with the standard Ipad (jumping through a few hoops because its the 32GB Wifi only), but still.

Heres where I need people to weigh in: Some webpages in Safari are an issue. Occasionally I will have a problem scrolling horizontally, or getting things to display correctly, and ill have to jump onto the Mac to get a good load of the webpage. Specifically, working with Squarespace is tough on the ipad. I get issues with scrolling, and positioning the squareapces editing blocks, etc.

My question, is this an iPad thing, of is it more a function of my small screensize (9.7), and maybe safari having issues with the scaling?

I assume the 12.9 pro would load webpages just like a mac since Ipad OS 13?
I’d love some insight as this is the last mental hurdle before I can commit to going iPad only (there are a bunch of logistically hurdles, by the way. I live in Lesotho, Africa, and we have no access to apple products, even for delivery. With COVID we are stuck in the country and unable to get to South Africa, which is the only place we could get such things. So, im dreaming!)

Occasionally I will have a problem scrolling horizontally, or getting things to display correctly

Have you tried making the site send you the desktop version instead of the mobile version? 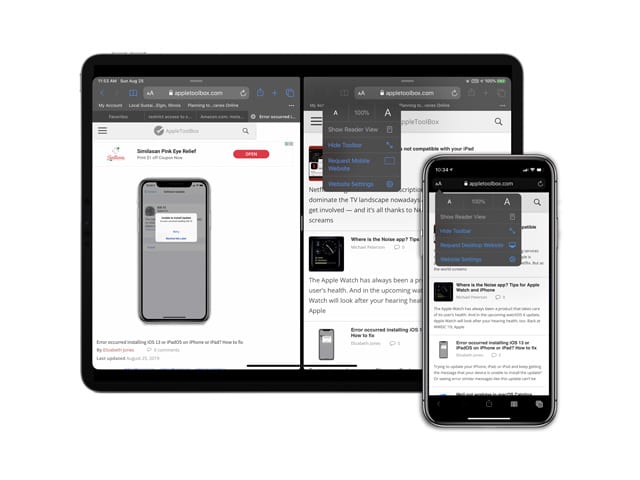 How to quickly view a desktop version of a site in Safari on iPhone or iPad -...

Using Safari on your iPhone, iPad, or iPod but not finding the same options as your computer? Learn to quickly switch to the desktop version

Great idea, thanks.
One other area that comes to mind, and where the app falls a little short of the web version is Quickbooks. The app is great for capturing things etc, but I have a hard time working in the app. The web version also shows up with some strange issues on ipad. But ill try @bowline suggestion and give it another shot.

I thought the iPad defaulted to desktop safari view now?

From maybe last WWDC I’m almost sure my Pro does but happy to check a page if that helps and can do some sort of video of interacting with it. Mine is the 11 rather than the 12.9.

Other option could be a third party browser for that specific site, might load it differently? Then just save it as a shortcut to the home screen for ease of access. Not a perfect solution.

Yes, as of iPadOS Safari defaults to the desktop website.

For the problematic websites, it might also be worth trying a different browser to see if it makes any difference.

I think @Wolfie 's suggestion has been making me think: for the problematic websites, trying that companies app will be a good solution. I think in the past year I have tended towards trying to do certain things web based rather than app based. Especially the companies who put in some effort on the ipad apps, its probably for a reason.

You guys find that you get along ok with spreadsheets on the ipad? Ive been making an effort in that area, and maybe thats one of the hardest to get across to ipad only. Im so used to Excel on the Mac, and while Excel is good on the iPad (as is numbers), all that muscle memory makes it slower.

I use excel a lot, the iPad does fine for most things but its still missing a few features and completely agree its almost a different way of using it to work it from the iPad, which takes some getting used to. I still don’t use it full time on my iPad (yet, been posting a bit over the last couple of days about changing my setup one way or another) but certainly for the relatively mundane excel stuff the iPad is adequate.