Is anyone running the Beta on their iPad? I have the 2020 iPadPro and am tempted to try.

Am I insane? How buggy is it?

I suppose much depends on what software you’re running, how you use the iPad, etc. — so YMMV, and all that.

With that caveat out of the way, I can say that I’ve been running the beta since Public Beta 2. I use my iPad (the 4th gen Air, so I just missed the M1 chip) every day for work. I’ve come across the occasional minor glitch/crash, but I do mean occasional. I’m able to use it for daily work without difficulty.

Cool that is what I was looking for.

Apps - the gamut of everything: DayOne, Obsidian, Fantastical, Reader from Readwise, Dropbox, …

I’m in large part curious to play around with StageManager inspite of Fredrico’s unhappiness with it. I would also love to setup focus homescreen/lock screen setups like my iPhone.

I, too, have been on the beta since beta 2. I have found it to be very stable in my use.

FWIW, I turned off stage manager after about a week. I felt obligated to use it

and really tried hard to fold it in to my workflow. While it is an exciting new design, I just didn’t find it very useful and it frequently got in my way.

I am running public beta 8 on my iPad mini 6 first, no big issue experienced so far. Then I install the same onto my iPad 12.9" pro (4th gen)

I just installed it on my iPad and it needs to be enabled via the Homescreens & Multitasking settings.

ah, found it . I did a spotlight search within settings and could not find it.

thanks for the tip. I turned it on and I do not mind it

What feature do you want to try now?

Until yesterday I saw no reason myself, but then I discovered that Cloudflare supports Passkeys, which works great in Safari 16 on iOS 16 and macOS 12 (the Passkey syncs via iCloud Keychain between them).

I can create a separate Passkey on iPadOS 15, but cannot sync them…

I am running iPad OS 16 since the public beta was release on my iPad Pro 11". It seems to work great, but I mostly use my iPad for media consumption, email and internet surfing.
Cheers,
Bud

I was really hoping that iPadOS16 focus modes allowed setting the homescreens in the same way the iPhone does. My goal is for iPhone/iPad/Watch focus modes to make clear, I’m in “Personal/Work/Workout” focus modes with colour and other accents. To do a lot of this I will need to wallpapers per focus mode and set them whenever there is mode switch.

@jec0047 I’ve been running Beta software in various flavours for over 30yrs. It’s probably too late to stop now.

@budjames it is nice to hear another person with a stable experience.

I started with public beta 2 on my 2019 iPad Pro and have only had to send feedback once. I have had a few times where an app would crash or not behave correctly, but they didn’t happen consistently enough to report, IMO. I use my iPad daily for work and run the OmniFocus 4 beta, iWork apps, and some Microsoft apps without issue.

As for Stage Manager, I don’t dislike it, but I haven’t found a use case in my workflow where it does anything different than the split screen already accomplished.

Overall, I’ve found the iPhone beta to be far more problematic than the iPad.

I’ve been running Beta software in various flavours for over 30yrs.

Modern Beta versions of i*OS and macOS have certainly gotten better than the “old” days, and I realize I’m probably in the minority (by refusing to run Beta software); I’m just wired that way.

I have no hard numbers but I doubt that you are. I even try to avoid the first few iterations of general releases! My only justification for running a beta or other early release on my personal devices would be impatience. Which is not a virtue.

If you ignore stage manager I think it’s fine. I’ve been on the public beta’s since the first one, and it’s fairly stable.

But if you want to use stage manager … maybe wait until iPadOS 17?

You’re sane. I’m just happy living on the edge. I push boundaries, nearly everywhere. Sometimes it’s genius (being among the first to appreciate the value of Agile/Scrum over 20yrs ago), sometimes it’s a waste of time and money (iPad Brydge keyboard).

Playing with Beta software is an easily reversed mistake if it goes wrong. FWIW I wouldn’t put the early beta’s on a working machine.

You may well be right about stage manager, I’m going to give it a few weeks.

The real winner so far is the extra pixels from Zoom mode. Two windows side by side now contain a decent amount of text.

As noted above the real disappointment is none of the iOS16 magic for homescreens/wallpapers/lock screens has come over.

I installed the beta earlier today on my 2018 12.9 inch iPad Pro, and I’ve had 4 crashes out of Stage Manager and back to the home screen in about 2 hours of use. So still buggy.

But wow, Stage Manager as a concept is perfect for how I work, and lets me work similar to how I work on the Mac. I’m a heavy user of Spaces on the Mac. On my 13 inch MacBook Pro, where there’s not enough horizontal space compared to my Studio Display, I have one app (in each space) start at the left edge of the screen, and end a couple inches from the right edge, while a second app flips that, and starts a couple of inches from the left edge of the screen and runs all the way to the right edge. That keeps both partially visible at all times, and easy to toggle. I’m now doing that with Stage Manager, and it works really well, aside from the crashes. 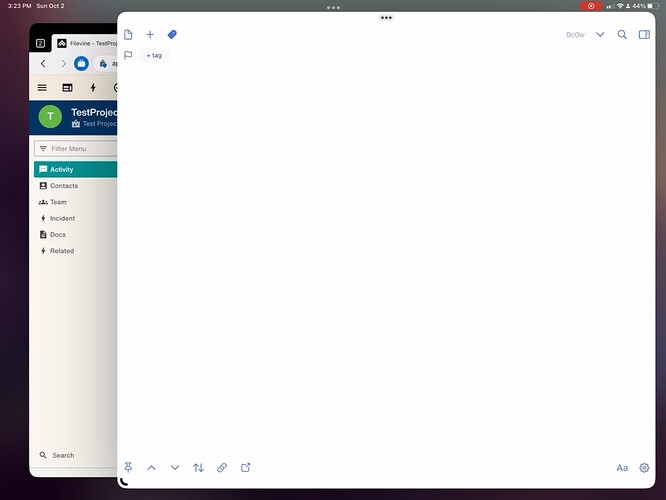 In the old split view model pre Beta, I had to keep one app at the thin “iPhone width.”

the extra pixels from Zoom mode

the iOS16 magic for homescreens/wallpapers/lock screens

I’m not sure I’d call this magic yet, it’s been really buggy for me, so if they want to delay this for the iPad for a little bit? Also: does it really make sense for an iPad the way it’s set up at the moment? Wallpaper sets I can see, but those widgets? I’m looking at my phone lock screen at least a hundred times per day (probably a lot more), but I look at my iPad lock screen… well… three or four times? It’s more like a quick glance at the notch for faceID to pick it up, open and go…

If they only could get Stage manager fixed and get slide over working for that!
Not having drafts, yoink and my password manager in slide over breaks my entire workflow completely and wastes a lot of time in Stage manager.

I can live with Stage manager crashing every app 2-3 switches on a secondary screen, but not being able to quickly get to a 2FA code in Bitwarden with a swipe in and out is a no go for me even if they get all the bugs sorted out.