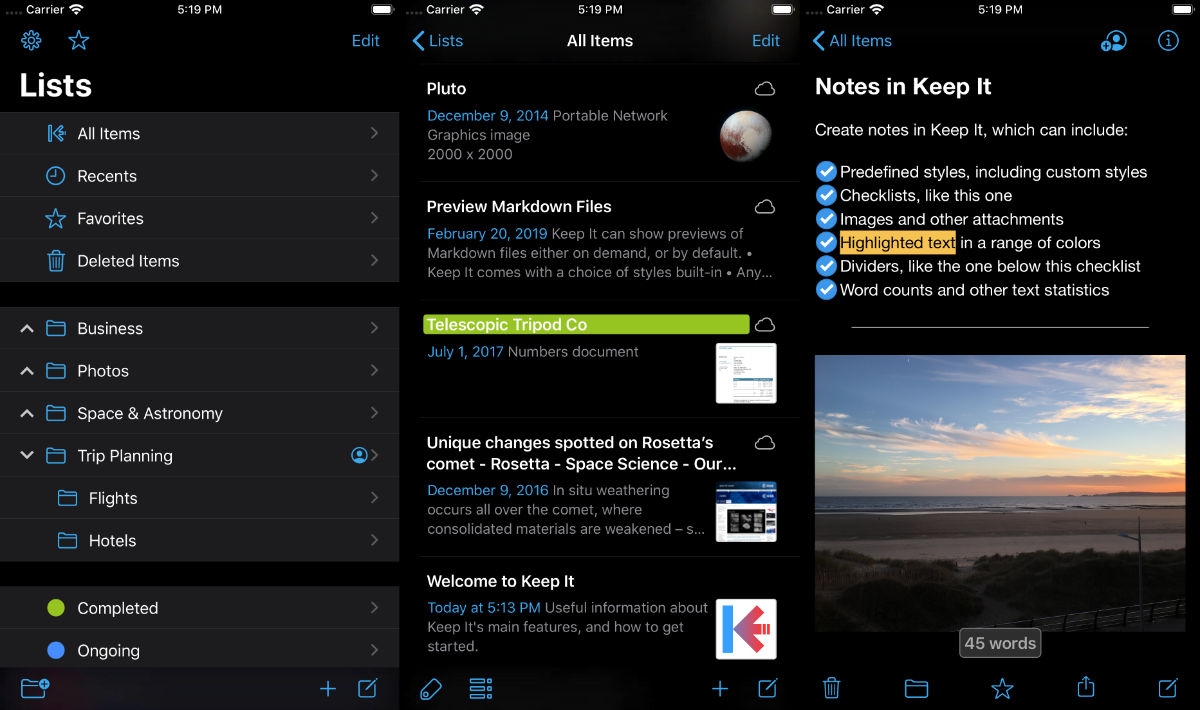 Keep It 1.7 is now available for Mac, iPad and iPhone. On both Mac and iOS, version 1.7 adds search and text recognition for attachments, improved Markdown previews, and improvements for viewing and working with mail messages, along with various...

I tried Keep It, but had enough iCloud sync issues that it made me leery. Plus, charging a separate subscription for iOS and Mac for a total of $30/year never quite felt right to me.

I think without the iCloud issues I might have gotten over the cost issue, but together they led me to not renew my annual subscription when it expired this month.

I also had sync issues. I may give it another chance though.

I also had terrible sync issues with KeepIt.

Thanks for the heads up, this looks like a good update.

I use it for collecting offline PDFs of webpages and have zero issues with sync.

I only add a couple of articles a day, and only have around 4,000 PDFs in total. I have not had any sync issues in around 12 months of use, and find it clips better than other apps like DEVONthink (which fails when I clip from many sites while Keep It does not).

In terms of cost, I just went for the €55 one-off payment. I do not like subscriptions in general, and find this a more reasonable proposal. I still pay the €10 for iOS a year though, but get enough use out of it to make it worth it.

I had issues with Keep It’s sync in earlier versions, but it has been reliable for me for months now.

I haven’t tried all the enhancements available in version 1.7, but the user interface on iPadOS has some nice refinements.

Ok. Tried importing 943 items into keep it on Mac. The app froze

Not sure if it was a particular file or what?!?!

Devonthink seems to chew through stuff like that. Will probably try agin when I have more time.

Any update on your experience with Keep It, Adrian?

I stopped using it.

Keep in mind… I’m a notorious switcher, however:

All these apps are primarily used as everything buckets for me. Document storage and general notes.

My most used work flow is to scan documents using my ScanSnap. I prefer to scan to a cloud service and not directly to my Mac because my Mac is not always a on. I also need to make it so my wife has access.

My wife has long grown tired of me having her switch from app to app, so I needed to find a better solution.

I have used Evernote since 2008 and decided I still prefer it for my everything bucket. I like that it keeps items in the cloud and items sync instantly. But as I stated, my wife doesn’t really like Evernote or any of my myriad of apps.

What I do now:
I scan all documents and keep everything in one shared google drive folder. This gives my wife access, and search works well enough that my wife has no issues finding documents.

After items are in google drive, I periodically (1x/week or so) drag documents to Evernote, as that is my preferred app.

The iOS app is still pretty awful, but I’m holding out hope they will eventually fix it.