Is anyone aware of an app that can scan everything on my Mac and create a list of all of the keyboard shortcuts that are available so that I can manage them centrally? The shortcuts seem to be scattered and inconsistent. Some keyboard shortcuts live within a specific app, some live within keyboard preferences, some live in places like Keyboard Maestro or Text Expander, and there are some whose point of origin is a mystery. I’d like to see ALL of them grouped in one place so I can bring order to the chaos and figure out a way to make them consistent and more memorable.

Along those lines, I’m also interested in whether anyone has concocted a good protocol for assigning keyboard shortcuts, e.g., everything related to a certain category of shortcuts (say, handling files) or type of shortcut is triggered with a control option command, while shortcuts that trigger certain actions (switching tabs within a given app, for example) use a different hot key protocol.

For years I’ve owned Ergonis Software’s KeyCue, which sells now for around $23:

But there’s a free option called CheatSheet as well (which I’ve never used):

I use CheatSheet, but it won’t scan all apps. It’s intended to be interactive – you hold down the command key while in the app of interest and it pops up all the keyboard shortcuts. You can print them out if you want, but that’s the extent of its functionality.

I had no idea such a thing existed. Thanks for posting this.

I’ve used CheatSheet since 2012 and it’s usually the first thing that I tell people to put on a new Mac. I’ve never seen KeyCue before, but I like the looks of it. CheetSheet doesn’t work for all apps, and often some of the shortcuts are missing, but KeyCue looks much more in-depth. Do you feel it’s really worth the $23?

Cheat sheet is good. You may want to check out Kotkey Eve

Cheatsheet seems to show only the shortcuts that are available as menu items. I am missing the more obscure ones (which are those I‘m likely to look up).
Just installed Hotkey Eve and like the idea of it.

I’ve never seen KeyCue before, but I like the looks of it. CheetSheet doesn’t work for all apps, and often some of the shortcuts are missing, but KeyCue looks much more in-depth. Do you feel it’s really worth the $23?

I just checked my registrations and see I first bought it in 2012, then paid two subsequent EUR 9.99 upgrades over the last six years - so it’s cost me around $44 total. So, it’s worth it for me. I rely on KeyCue with complex apps, and with apps I don’t use much. It does so much. It integrates with their other apps like PopChar X, which I’ve owned and use for longer than KeyCue(!), so that you can view recently used and favorite font characters. It even integrates with its Typinator app (a longtime, non-subscription competitor to Text Expander), letting you see recent/fave text snippets as well. (I don’t use text-expansion apps, so I can’t speak to that integration.) The pop-up wall of emojis is useful too.

You can choose themes for how everything is displayed - I’m in Chrome now, and here’s what Chrome’s KeyCue pop-up looks like with my dark mode theme: 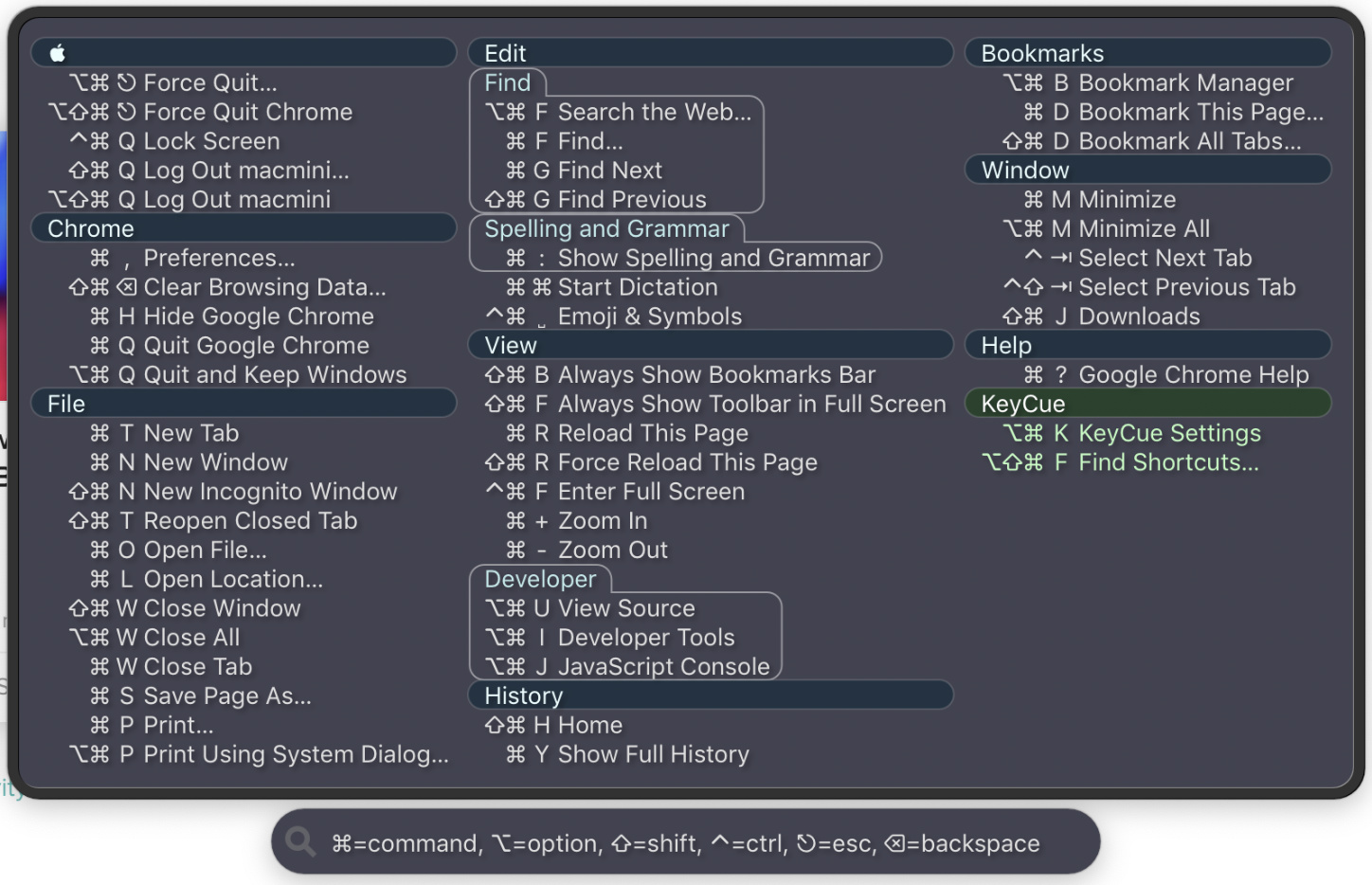 Wow, this is pretty impressive. I will have to run a trial of it for a few days, this could put CheatSheet on the chopping block

Good luck. FYI here’s another example - the KeyCue for SnapNDrag Pro. It’s the screenshot app I needed to use for its timer function in order to grab the KeyCue window (I’d accidentally snapped it first, instead of Chrome, lol) 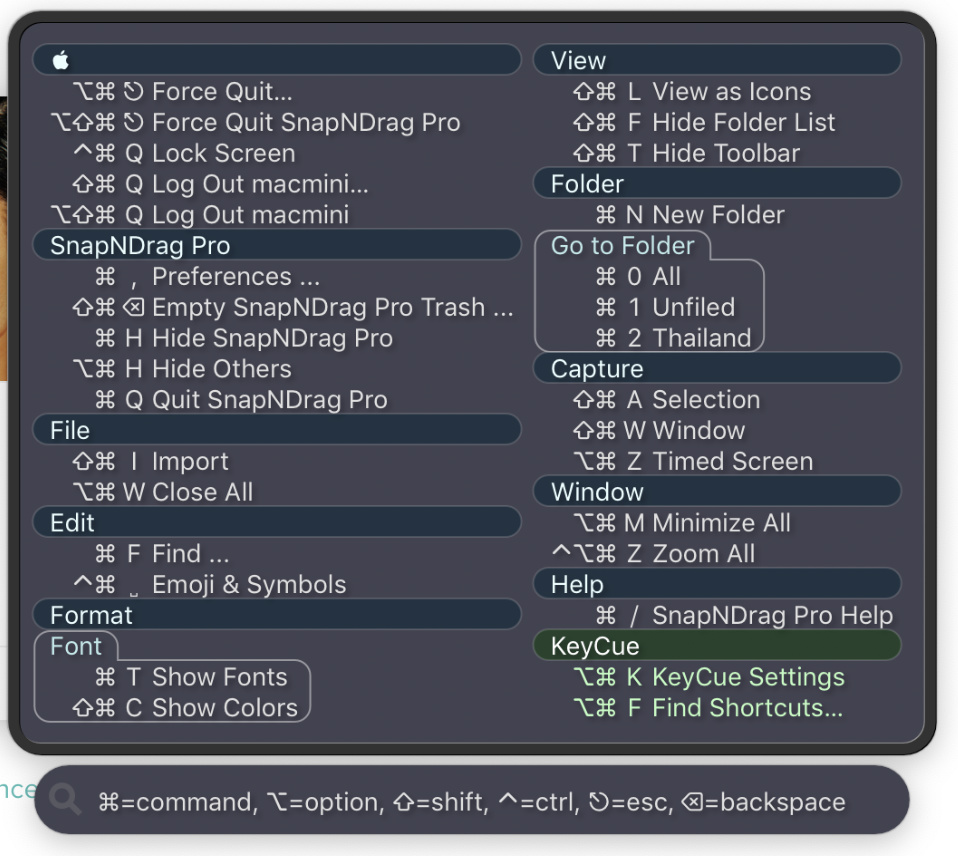 I’ve been using the trial since early this morning: man is this great. A lot more functionality than CheatSheet by far and the list of shortcuts is really abundant. Thank you bowline!

Got it. Solved the problem. Thank you.

Like others on this thread, I had no idea that this existed. I had been using CheatSheet but I was frustrated by its lack of coverage. With KeyCue’s learning mode and customization features the coverage problem is solved. Thanks @bowline! I think these guys owe you a commission! How do you find all this good stuff, anyway?

Additional features of KeyCue that are helpful:

Ergonis is a solid company and all of their products are excellent. I threw TextExpander overboard a long time ago in favor of Typinator. Much better features.