This makes a lot of sense. Great tip!

My MBP is plugged in 24x7 for 5 years (except when I am on the deck or just using it disconnected from power ) and never had any issues. I

My 13" M1 MacBook Pro is constantly connected to power through a CalDigit dock. The “Optimize Battery Charging” setting is selected. 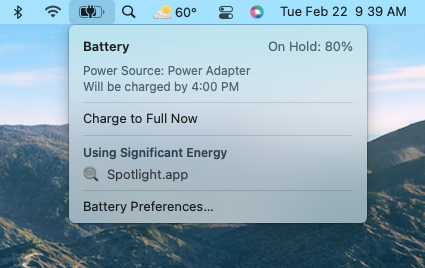 I have no way of knowing if this intermittent discharge-recharge to 80% for a short time-return to 100% charge is good or bad for the long-term battery life. I would prefer for a way to hold the battery charge at 80% (or even lower) while connected to the power cable until I manually toggle the battery charging process back on.

You will probably be upgrading to a new MacBook way before your battery has issues. I have a new 14" MBP M1Max driving two Eizo 27" monitors in clamshell mode. I have had the unit for about 2 months now and it only left my desk to be used as a laptop for about an hour since I use my iPad for mobile computing. So, I’m not too concerned about battery life yet. That said, I do turn off the unit and the power strip when I’m done for the day. I have not used the unit over the weekend, so it stays powered off with no power connection then.
Cheers,
Bud

I have no connection with that app or development or whatsoerver but I’m just a happy user.

Also check out this thread.

I didn’t think there was much I could do about it, but at the rate my MBA’s battery is losing capacity it will be below 80% before it’s two years old. So I tried AlDente for a couple of weeks then purchased a lifetime version of AlDente Pro. If it adds 5 months to the life of my battery it will have paid for itself.

TIL that AlDente Pro is in SetApp.

How are you using it?

It does for me (with the optimize setting), but the results are very inconsistent on the MacBook that sometimes gets used on battery power. (I have two that are plugged in nearly 100% of the time and they sit at 80% pretty faithfully.)

I really, really, really wish Apple would have made the optimize setting just never charge past 80%, because their “learning how you use your computer” thing doesn’t work especially well.

I contend that most of the power users here will be upgrading their MBPs every few years or at least way before the battery degrading issues become a real problem.
Regards,
Bud

You may be right. Computer enthusiasts tend to replace their hardware more often than regular users.

Currently I’m still just using it to cap charging to 80%. Occasionally running my MBA down to 30% or so was never enough to trigger its “Optimized Battery Charging”.

I have a powered spinning drive and 2 Samsung T7s connected to my Mac via a small Anker dock that will run the battery down at a rate of 10+ % an hour if I disconnect the dock from power. So now, at least once a week, I let my battery get some exercise while I’m out in the sunlight doing the same.

AlDente Pro has several other features that I may use later but I purchased it mainly to support the developer.

We do tend to replace our computers regularly around here, but I think a lot of us are handing them down to someone who might ask us about a bad battery.

Is it a good idea to shut down your laptop most every night? I am so use to ipads which I rarely shut down.

No need. Your M1 Mac, in particular, sleeps very similarly to your iPad when its lid is closed.

Agree with @cornchip, with the caveat that in my experience an occasional reboot seems to help with stability.

Oh yeah. I wind up rebooting every day practically, ususally due to Adobe Photoshop Elements.

I must say that the optimised battery charging setting is working very well on the MacBook. I wasnt sure if there was a way to check but I found Airbuddy shows this information. I am glad there is no need for me to use a thrid party app for battery management 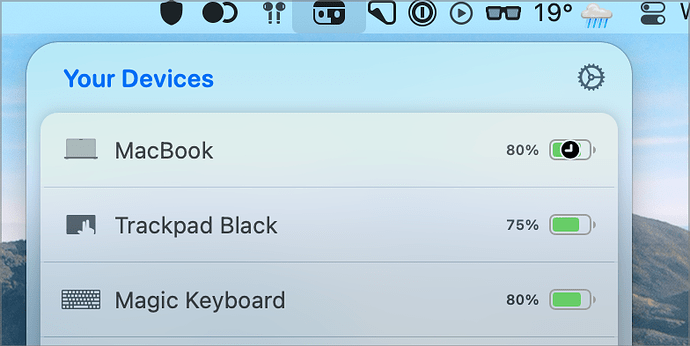 My macbook is plugged in all day. Only in the weekend, I disconnect it. For me its a monday to friday work horse. I do not work weekends.

Count me in the camp who leaves it plugged in all the time. I just don’t have the brain space left to worry about battery service life. When it drops low enough, I’ll just get Apple to replace the battery. Easy.