I’ve been using stage manager every day for two weeks since it was released on iPadOS. I’ve read a lot of negative commentary over the summer, but wanted to try it for myself and form my own opinion. My overall impression is that Apple is on the right track giving iPad power users what we’ve been clamoring for years, multiple overlapping windows. The implementation is a bit strange and takes getting used to, but once you do, I feel like I have more power and control over my iPad than I did before.

To give an idea of where I find it is an improvement in my normal workflow, I have 1 stage that I use as my default workspace (terminology is not clear as others have pointed out). It consists of 4 apps that I use most often, Safari, iA Writer, Messages and Spotify. Having a workspace with 4 apps was not possible before and I find this to be the biggest win with stage manager. I can browse the web, take notes on what I’m reading while keeping an eye on Messages and skip around in Spotify if I don’t like the current song. One complaint people I’ve read is iPadOS dictating the size and positioning of windows. I’m torn about this one myself. Most of the time I think it is fine, but sometimes I do wish I had more control. The good part about it is that all the windows are always visible, even when overlapping. I never have the problem I have on macOS of accidentally hiding a window. This is something I have to live with longer to see if I get used to it.

I find the setting up of new stages (workspaces?) weird and frustrating and this is where I hope Apple spends their time refining the interface. When I sat down to write this post, I wanted to have 3 windows available, an iA Writer window with the notes I’ve taken on stage manager over the last 2 weeks, another bigger iA Writer window for writing the post and a third with Safari to lookup information while I’m writing. To get this to work I had to go through the following dance: 1) Long press on the iA Writer icon in my doc 2) Select Show All Windows 3) Hit plus button in upper left corner which creates a new iA Writer window on a new stage. Do this again and at the end, drag the 1st iA Writer window from the shelf into the new stage. Repeat for the Safari window, switch back to the stage with 2 iA windows and drag the Safari window to the stage. This is very non-intuitive and it took me a long time to figure out how to do what I would think is a common workflow. It is certainly common on macOS. Here is a screenshot of the stage after it was setup. 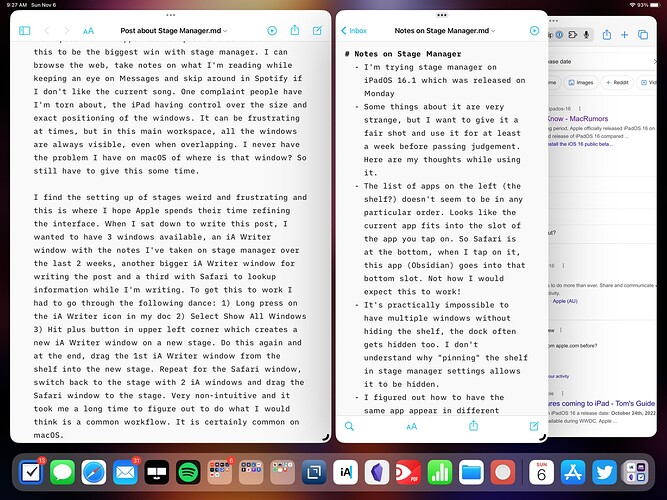 Some miscellaneous observations, it seems impossible to keep the shelf visible if there is more than 1 window on a stage, but I’ve gotten used to sliding my finger from the left side to show it when I want to switch stages. Same gesture as activating slide over, I just wish they had a keyboard shortcut for this.

Four finger swipe on the trackpad reveals the app switcher, I use this when I don’t see what I want on the shelf. I have a few common workspaces setup now and once they’re setup, it is fairly easy to find it here, but sometimes I wish there was a search.

The active window indicator is still too subtle, you really have to squint to see which 3 dots have the gray border, please make this more obvious Apple.

I like how Picture-in-Picture works alongside the different stages, as you switch between them the PiP remains. This also makes it technically possible to have 5 windows in a workspace, as long as one of them is a PiP window.

To summarize, I think Stage Manager needs some work, but for 2 weeks I found it to be an improvement over my previous multitasking experience on the iPad. I think a lot of the negative comments were probably due to a buggy beta implementation that caused people more frustration than I encountered. I don’t really run into many bugs using it, just some weird workflows that Apple needs to improve. I’m glad Apple has this beta period to help them squash the bugs, but I wish that the reviewers would keep in mind that it is beta software. They should really wait for the release to make a judgement on the software. Waiting and coming to it fresh on the official release date, I was mostly pleased with the experience, while also feeling that some things can be improved. This is software we will live with for years, people shouldn’t rush to judgement just so they can publish a review on release day. I can wait 2 weeks while you kick the tires and give the software a fair evaluation.

I read the Macstories post on Stage Manager and thought it was over the top with frustration mostly due to the bugs he encountered over the summer. I don’t think he was fair in his criticism. It was like he had a clear idea in mind what Stage Manager should be like and criticized it for not living up to his ideal implementation. I want someone to evaluate software as it is on it’s own terms, not comparing to the imaginary ideal.

It’s rare that I read something and completely agree, this is one of those instances!

Oh, I meant to add that it is possible to have two windows open and still see the side bar. See attached examples. 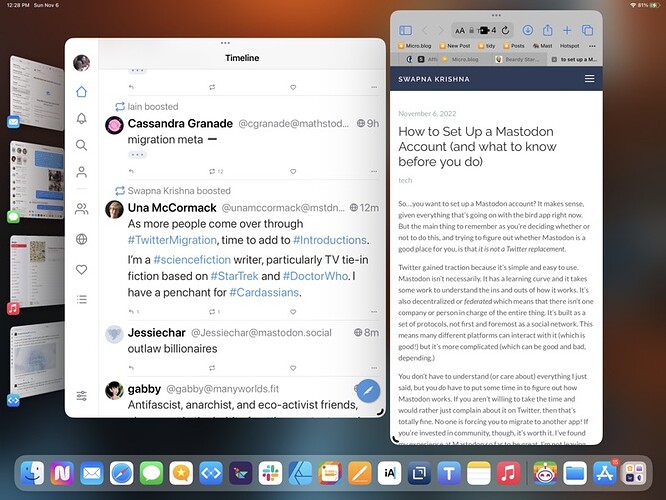 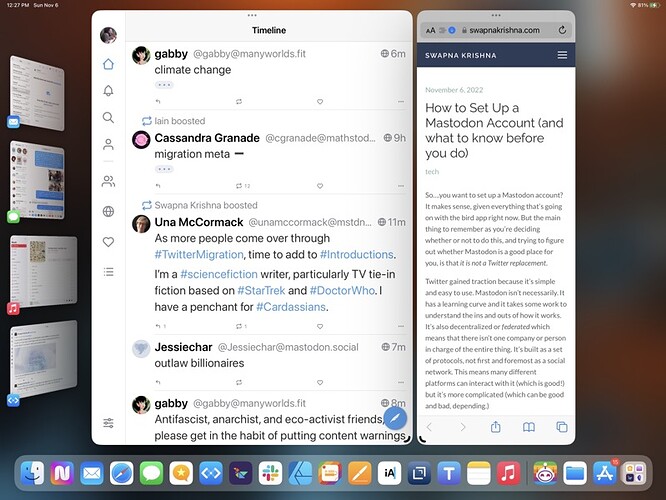 My one frustration with SM on iPadOS is that I cannot simply swipe a frontmost window to the side to minimize it. I have to click on the three dots and select a menu option.

Am I missing a secret trick?

It works for me. Tap in the top of the toolbar of a window continue holding and drag it to the side bar and release. It should drop into the sidebar.

Yes, thank you. I see this works when the stage has more than one window. When the stage view holds only one window, the one window cannot be minimized by drag + drop. Also, one cannot touch the background and have the windows disappear to bring up the home screen view. The analogy is to option click on the background in macOS to hide the current front window.

At least I see now how to minimize with more than one window. Thanks!

one cannot touch the background and have the windows disappear to bring up the home screen view.

I read the Macstories post on Stage Manager and thought it was over the top with frustration mostly due to the bugs he encountered over the summer.

I think a lot of the negative comments were probably due to a buggy beta implementation that caused people more frustration than I encountered.

YES! This has been my conclusion from reading most of the post-release reviews. Many of the commentators seemed to continue to have a bad taste in their mouths from bugs and UI problems that they discovered during the early beta period and were not judging Stage Manager as it was at the time of release.

I don’t really run into many bugs using it, just some weird workflows that Apple needs to improve.

I’ve posted my thoughts SM on iPadOS elsewhere and came out in many ways like you did. I like SM, there are some things that I feel could be improved–to make it better, not because it’s bad–but overall I like the functionality and think this is the future.

Early on, I found myself switching between SM and traditional iPad multitasking. As I’ve gotten more accustomed to it, I haven’t turned it off in days.

Thank you for your impressions. I have used SM almost exclusively on the Mac so far, where I really like it. It has already become my new way of managing windows on the Mac. It would be useful, though, if they would add a) keyboard shortcuts, and b) context menus for the strip. But overall, I’m pretty pleased. Currently, I’m on an extended trip, so I only have my MacBook with me, and I’m really looking forward to trying out SM with my display at home. I also want to test it out on the iPad, and your post motivated me even more so!

Regarding the ‘professional’ commentary, it is what always is: An echo chamber. Also, people like Federico have one great disadvantage, I think. They don’t have a profession for which they employ tools, and could therefore see it though the lens of actual usefulness for that purpose. Their profession is to write and talk about the tools they also use to write and talk about. In my opinion, this inevitably leads to distortions in judging certain things.

Currently, I’m on an extended trip, so I only have my MacBook with me, and I’m really looking forward to trying out SM with my display at home.

I have found that SM on a single display, such as a laptop display, is excellent and even better (for me) than using Spaces. There are some things Apple needs to refine for the multi-display set up.

Exactly. I usually look forward to reading the reviews of various professionals (not tech journalists, but actual tool-users) to see what they found they liked and disliked. Those reviews generally offer much more valuable (concrete and contextual) insight into things that work or don’t work “in the field.”

OK, you’re right it is possible, but it isn’t the default, you have to shrink down the windows before the shelf appears. To me it makes more sense to start with smaller windows with the shelf visible and then let the user make them bigger if they want.

Exactly. I usually look forward to reading the reviews of various professionals (not tech journalists, but actual tool-users) to see what they found they liked and disliked. Those reviews generally offer much more valuable (concrete and contextual) insight into things that work or don’t work “in the field.”

Yes! Agreed with both of you. The case in point on that note, I do a lot of my work using Affinity Designer. Without Stage Manager, it only works in full screen, and in the past I would use a slide over window to refer to content or notes sent by a client as I worked. With Stage Manager, I am able to have the Affinity Designer window covering about 3/4 of the screen and have my notes or content to reference in the remaining quarter. So I’m now able to more efficiently use that app. It’s been great.

Also, worth noting on this, Serif, the maker of the Affinity apps, is making some big announcements this Wednesday. Most certainly one of those announcements will be the release of Publisher for iPad, which is akin to something like Adobe Indesign and one of the apps I still go to my Mac for. Will be really exciting and I suspect very beneficial to those of us that use the iPad to have Stage Manager along with this new publisher app.

I want someone to evaluate software as it is on it’s own terms, not comparing to the imaginary ideal.

I agree 100% on that. For what it is, it’s a great update. It could be better, but Apple is progressing it’s interface. 90% of iPad users aren’t thinking as detailed as the media and bloggers are. The biggest criticism at large is the multi-tasking functionality. But for the general populace, this is a nice step.